Academy Awards: Then and Now – Some Things Change While Others Stay the Same

The Academy Awards ceremonies are indelibly linked with the ideas of glamour, art, celebrity and creative innovation. The first Academy Awards held May 16, 1929 to a relatively small crowd of 270 people in the Hollywood Roosevelt Hotel began the annual tradition that has, since, never died. Although there are some differences between the original awards night and this year’s ceremony, such as, the price of the tickets (only $5 in 1929 to uninvited guests), press coverage and level of significance, the Academy Awards years will always be spoken in the same breath. Through coincidence, planning and tradition, the 1st and 84th Academy Awards are linked more than most; proving that – although there is an 83-year age gap – some things change while others stay the same.

Below is a list of five elements that connect the two note-worthy and illustrious awards nights:

5. The King and Queen

Who could forget the heavily satirised leg pose of Angelina Jolie as she stood at the awards podium? The famous and notorious duo of Brad and Ange make news wherever they go and have become perhaps the current reigning ‘King and Queen’ of Hollywood. But they owe their current crown to the first to hold the title – Mary Pickford and Douglas Fairbanks. The two couples seem almost identical, each were stars in their own right, both were brought together under scandals – with Mary and Douglas married to other people when they began their affair as was Brad when he fell for Angelina – and both were heavily involved with charity work. In addition, with Douglas as the host of the awards night, his presence, as well as his wife’s, in Academy Awards history is as clear as ‘Brangelinas’.

It is when looking at pure coincidence that both awards nights are most noticeably linked. On the one side both years are famous for being the only occasion where silent films won ‘The Best Picture’ Oscar –  ‘Wings’ (1927) in the 1929 awards and ‘The Artist’ (2012) in the 2012 awards. However, more deeply the first awards night was more prominent for commemorating the production of the first mostly talking film ‘The Jazz Singer’ (1927) while the current year gave its biggest praise to the first mainstream silent film to be created since the silent era.

It seems even animals had a share of the limelight in 1929 and 2012. Although it is only legend, it is rumoured that famous dog-star Rin Tin Tin was originally put up for a contender in ‘The Best Actor’ by Warner Brothers only to be removed by the association for being ‘inappropriate’. Similarly, Uggie the dog who played the character of ‘Jack’ in the film ‘The Artist’ (2012) stole the show –and at some parts the Academy award winning film – making him an entertaining and important aspect of this year’s Oscars.

Like all awards nights the 1st and the 84th were filled with a fair share of scandals and missing elements. Examples of this is the presence of Sacha Baron Cohen in the guise of his outlandish character ‘The Dictator’ and the nomination of ‘Extremely Loud and Incredibly Close’ (2012) for ‘Best Picture’ which some critics considered to be, “the worst film of 2011”. Similarly, 1929 had some more controversial elements; including the lack of nomination for ‘The First Lady of the Silent Screen’, Lillian Gish for her work in ‘The Wind’ (1928) as well as no mention for comedy genius Buster Keaton for ‘The General’ (1927). 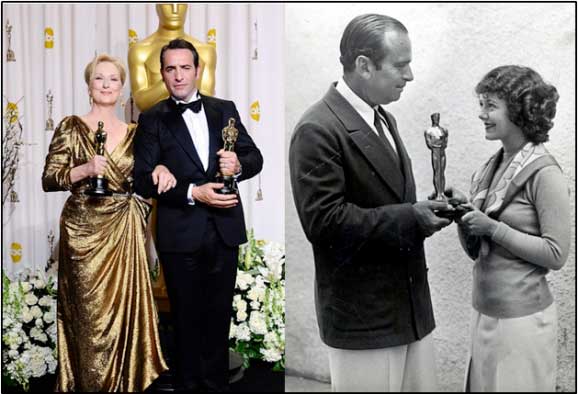 1929 marked the first year of the Academy Awards and the presentation of the Academy statuette which was designed by MGM art director Cedric Gibbons and created by sculptor George Stanley. Although, it wasn’t named ‘The Oscar’ until the mid-1930’s, it has become a crucial part of the awards legacy which began with the first awards in 1929.

The Academy Awards presentation has and always will be filled with history, tradition and a degree of fame. Every year whether it be 2012, 1929 or 1949 will be linked through these traits and its long coloured past; however, the 1st and 84th are connected more than most, illustrating that history is always relevant today.