Comic related movies of 2013: Who will fly? Who will fall?

2012 was a huge year for comic book movies. It was obvious as The Avengers approached that nothing would ever be the same once we all saw it. The bar has been raised in terms of fan expectation and the all-important box office results. Most of the films coming in 2013 are going to be considered tent pole releases, but is that justified?

Iron Man 3 [May 3rd] The first Iron Man made a little under half a billion dollars, $98 million of that in the opening weekend. The second had a similar opening weekend and pulled in over $600 million in total, but was not as popular with movie goers or comic fans. The expectations for the third film are looking a little unrealistic to me. The studio is looking to top the second film, with The Avengers success fueling expectations, and they are hopeful for more. I am skeptical on this one. Shane Black is untested as a big budget director and is said to be aiming for a more action thriller style film. The real worry here is “franchise fatigue”. If this movie under-performs, it could seriously damage the prospects for the rest of the new Marvel cycle of films. I am hopeful that this movie will not be a disappointment, but the number of franchises that have put together three good films in a row, let alone three good films at all, is not high. My prediction for this is a $120 million opening weekend and $590 million in total. If it hits those numbers, I think it should be considered a success. However it will need to be a good movie to keep the momentum going or big box office is not going to be enough.

Man of Steel [June 14th] There is very little fan excitement for this film and I cannot blame them really, as the last popular live action Superman film was Superman 2 a mere three decades ago. Superman Returns had some special moments and Brandon Routh was an inspired choice, but it failed to ignite any real interest in the franchise. Henry Cavill seems like an interesting choice, and if anyone can do Big Blue well it is Zack Snyder (Watchmen, 300, Sucker Punch). Unfortunately this film has the specter of ‘rushed production’ hanging over it. Had Warner Brothers not gotten this into production when they did, they would have had to pay money to the Siegel and Shuster estates. Rushed films often have troubled runs at the box office and the lack of fan interest in this is not a good sign. It is possible as more promotional material is released this might improve the movie’s outlook, but I think this film will likely be a box office disappointment no matter how good it is. If this film breaks the $300 million mark I will be surprised.

Kick-Ass 2 [June 28th] The first film was a surprise hit, and fans have been hoping for a sequel for a while. The real pull into theaters on the second of these will be the numbers of non-comic fans that discovered the first film on video since it was released. This film promises to be good, sick fun and I would expect it to make somewhere north of $150 million. Given the comparatively low budget on both films, that would be considered a hit.

R.I.P.D. [July 19th] Based on the Dark Horse comic, there is virtually no chance that comic fans will make this film a success. There just are not enough of them aware of this book. This has a great cast and could be a sleeper hit, but only the general movie-going public will make that happen. The movie has also been pushed back on the schedule (probably to avoid Kick Ass 2 and Man of Steel), but that does not show a lot of faith in the film on the studio’s part. I think a $20 million dollar opening and no more than $80 million total unless this film really catches fire and with The Wolverine opening a week later, that is not likely. 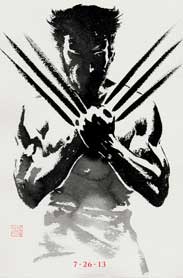 The Wolverine [July 26th] The studio’s first attempt at a Wolverine film was less than dazzling and bothered many fans. This one is at least based on the Chris Claremont/Frank Miller Wolverine mini-series from the 80’s so there is hope. Fox’s X-Men films have been the least faithful to the source material of all the recent film adaptations, and have had a very mixed bag of results. If they can make a movie more like First Class and less like Wolverine: Origins, then there is a good chance that this film will dominate the late summer box office. I think that $150 million is a safe bet, but this could do a whole lot more, maybe double that.

300: Battle of Artemisia [August 2nd] Really? Were we all waiting for this? Were ANY of us waiting for this? The first one was a huge success, bringing in nearly $500 million and lasting in the theaters and on video far longer than anyone thought possible. However, the second film has none of the key players from the first one save Rodrigo Santoro as Xerxes involved and is an almost certain failure no matter how good it turns out to be. The first film is remembered more fondly than it deserves in Hollywood, and it would seem that all Hollywood sees is a license to print money, thinking people are dumb enough to think this will be as good as the first. While that is certainly possible, it is not something I am betting the farm on. If this breaks $100 million, the studio should be turning cartwheels.

RED 2 [August 2nd] I have to confess that I really liked Red, but I wish that it had been the only one. This movie is probably going to disappoint almost anyone that enjoyed the first one. The need in Hollywood to bleed a property dry is getting old, and the fans are getting wise. This film’s reception could suffer from that problem. With most of the original cast returning, and the basic premise looking like it has lots of room for comedy. The first film did well, falling just shy of the $200 million mark, but I wouldn’t expect the second to do that well. Adding the fact that this is a late summer release, I think things will cool off at the box office.

2 Guns [August 16th] Um, no. This film is so far below anyone’s radar it might as well be rolling along the ground. 2 Guns is likely to be this year’s Dredd; a film that does well with critics and its core audience and NO ONE else, which is too bad since this looks like an interesting movie.

Sin City: A Dame to Kill For [October 4th] Many fans of the original have been waiting for this one, and I think that there is a good chance it will match the original’s $150 million take, but it will have to come from the comic fans. Like the first one, the appeal of this film is so narrow that Joe Punch-clock in a flyover state is not very likely to bother. As Hollywood used to be so fond of asking, “Will it play in Peoria?” Probably not.

Thor: The Dark World [November 8th] Even more than Iron Man 3, this is the film that Marvel movie fans want. This is the first film done entirely post-Avengers (IM3 had already been in script stage when that film came out), and the new cycle really starts here. With former 9th Doctor Christopher Eccleston and Bond villain Mads Mikkelsen signed on as new bad guys for Thor to pound on, this movie has everything needed to create a geek “squee” to be heard from comic fans everywhere. Expect this one to do at least 25% better than the original, putting it around the $500 million mark.

There is a great deal of anticipation for some of these, but is there an Avengers level hit in there anywhere? I very much doubt it. While there is much to hope for, I think 2013 will be the year Hollywood finds itself taking a step back to reevaluate how much money it wants to put into comic book related movies.

Posted on Nov 14, 2012 by
Taylor Ramsey
While I quietly wait for a really good excuse to go on an interstate mayhem spree, I read comics and watch movies. While I do the "writing" here, my wife makes it readable.
Follow