Disability in Comics: The Misconstrued Representation

When doing a quick search on “disabled superheroes” through Google, you are greeted with an obscure list of heroes; either not well-known or mainstream one shots with the disabilities never being treated as something permanent. It is only when digging deeper that results begin to pop up, showcasing well-known names such as Oracle and Daredevil. There are also instances and situations in which heroes have potentially been disabled at times (such as when Thor was cursed into the form of Dr. Blake and sent to earth by his father in various comics staring from Journey into Mystery from 1962). However, these hindrances do not exactly showcase what living with a disability is truly like. When searching “superheroes with mental disorders” a quick list does not even appear and when looking into lists, the results are rather narrow. Heroes and anti-heroes are, much like with those who are physically disabled, either not well-known, have poor or incorrect representation of mental disorders, or suffer a “mental disorder” by being nothing more than psychotic. 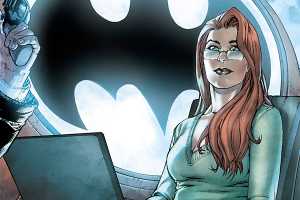 Many people suffer from various disabilities, both mental and physical, and struggle to live with them on a day-to-day basis. Heroes are also meant to represent society, its values, and its peoples. Heroes are held on a pillar of hope; fighting those who thrive on the disruption of peace and destroy tranquil social order. They are protectors, who come in different forms, shapes, and sizes just as people do. In terms of diverse representation, comics have been slowly increasing the diversity of their hero characterization from race, to gender, and sexuality to help reflect where modern day attitudes sit and where societies standards have shifted. However, disabilities are often left behind; treated as a type of paradox when it comes to “super” humans.

Not all disabled heroes are drowning in obscurity and in fact, most don’t suffer from horrible representation. In particular, within recent years, there has been a huge step of not only understanding mental disability, but also in accepting it. Within comics, the concentration of mental disability has fallen onto post-traumatic stress disorder – or PTSD. Bruce Wayne’s (Batman) trauma over losing his parents often comes to mind when thinking of those who have been prominently plagued by PTSD. Other popular figures that exhibit PTSD symptoms including Steve Rogers (Captain America) and Tony Stark (Iron Man). For Captain America, his PTSD has potentially been triggered by the shock of his unfreezing in the twenty-first century and his memories of World War II. Iron Man, arguably, developed his within events such as the death of his parents and his capture and torture by enemy soldiers (whose origins vary depending on the comic universe). Despite this comic and movie canon, visible symptoms have only begun to show more prominence in recent comic events such as in Age of Ultron.

Unfortunately, comics have yet to showcase and popularize heroes who outright suffer from mental disorders and those who are speculated, such as the schizophrenic Wanda Maximoff (Scarlett Witch), are left unofficially diagnosed nor popularly acknowledged. Nonetheless, there is a lack of heroes with mental disorders such as: obsessive compulsive disorder, depression, bipolar personality disorder, eating disorders and body dysphoria. Those who are more recognized with prominent mental disorders are villains.

Surprisingly, on the physical side, heroes such as Clint Barton (Hawkeye), or Natasha Romanov, (Black Widow) are showcased with disabilities as regular comic canon that has been forgotten by the Marvel movie franchise. Black Widow fights crime with a prosthetic leg, while Hawkeye is 80% deaf and uses a hearing aid. These physical disabilities play active roles in their comic canon lives and do not hinder their abilities what so ever.

All heroes have parameters for their powers, however, for those with disabilities there will always have to be another blockade for what they can and cannot do. For heroes possessing physical disabilities, comics have generally done a fantastic job at portraying what the mental or physical hindrance is, how they are formed and behave alongside their personas and powers, and how they learn to overcome these impediments. A fantastic example of a hero that has grown and learned to overcome their short comings is Barbara Gordon – the former Batgirl turned Oracle. During Alan Moore’s famous graphic novel The Killing Joke, Barbara was shot in the spine by the Joker and as a result was permanently paralyzed. Unable to continue being Batgirl, Barbara did not let her new disability slow her down. With her incredible knowledge of technology, she decided to take upon the new persona of Oracle – an information broker and hacker providing intelligence to not only Batman, but to other superheroes as well.

Another, and truly remarkable character, is Marvel’s mutant genius: Professor Charles Xavier. Suffering from both multiple personality disorder and is paraplegic, Professor X has rarely suffered problems due to his wheelchair confinement and from his extremely powerful, telepathic abilities. In fact, his phenomenal control and knowledge make him a guiding and fatherly figure among other mutants. However, his personalities have taken hold of him before. Suffering from a mental breakdown during the 1996 X-men comics, he became the villainous Onslaught. Overall however, perhaps the greatest parameter for Professor X is how mentally exhausting his powers are. The occurrence in itself is rare and usually only happens when battling other strong telepaths such as Magneto.

Some other heroes include the earlier mentioned Hawkeye, who has absolutely no problem using a hearing aid in the field, as well as the villain, Deathstroke, who is blinded in his right eye. He treats the visual impairment with absolute confidence, going as far as to wear a mask that completely covers the right side of his face to prove that the impeded site does not hinder his abilities as an assassin. Someone who truly does not suffer from their lack of vision is Matt Murdock (Daredevil). After saving a man from an oncoming truck, the radioactive cargo spilled onto him that although enhanced his senses, rendered him totally blind. Nonetheless, with his other senses enhanced, Daredevil is barely slowed down by his blindness.

Characters will always influence readers and characters will always reflect something within their readers. For those who suffer from mental and physical disabilities, they will look for characteristics that are reflected within themselves. Physically speaking, there is some positive representation within comic books, such as the earlier mentioned Batgirl turned Oracle. Her character exhibits true strength as she passes through the stages of shock, trauma over the injury, growth, healing, and recovery as she grows past her disability and continues to help in any way she can. Her character evokes a kind of hope that those who also have an existing physical disability. Whether formed through traumatic experiences or have been with them since birth, they can also be great and become larger than their disabilities.

Unfortunately, as mentioned earlier, mental disability is poorly mentioned among heroes and tends to thrive within disastrous situations and villains. The massively popular Joker who is a dominating presence within comics, films, and even video games is riddled with mental illness. However, his cold-blooded, psychopathic killing does nothing more than antagonize those who do suffer from mental illness and is a horrendous representation of extreme actions taken by those who possess mental disability and instability. More so, this destructive behaviour is mirrored through heroes. The PTSD riddled Tony Stark seemed to make a breakthrough within the events of Iron Man 3 after he had come to a realization of how debilitating his extreme anxiety and panic was and aimed to properly heal himself. However, within the next movie and comic installment Age of Ultron, his character reversed back into a state of severe paranoia. In his anxiety induced panic to save those whom he is close too, he created the robot Ultron – who paved his way in blood and death that obliterated the small country of Sokovia. This antagonistic display of mental disability is nothing short of degrading for those who do suffer in day-to-day life just as the disregard of a physical disability is virtually irrelevant because these heroes are “super”. The lack of positive reinforcement within the superhero genre is something that can, and should, be changed.

In Popular Media and the Future

Those who suffer do nothing but horrible things or thrive on un-relatable levels. PTSD’s destructiveness that thrive in the modern Tony Stark or Bruce Wayne come to mind, as well as the lack of any popular, physically disabled characters. It wasn’t until the recent Daredevil TV series that a character who is not only physically disabled, but also canonically disabled finally fell into spotlight. Matt Murdock flies solo in this regard, other than characters such as Bucky Barnes (the Winter Soldier) or the recently paraplegic Colonel James Rhodes (War Machine). However, the physical disability is practically none existent, as Bucky Barnes’ metal prosthetic arm is so technologically advanced that it behaves much like a regular arm – something that the average person in today’s society has no chance of experiencing. How Colonel Rhodes’, leg paralysis will be treated in the future Marvel Cinematic Universe is yet to be seen.

Superheroes, regardless of their race, disabilities, background, and story are still fundamentally “idealized humans” and there will always be a level of disbelief in the “superiority” of their abilities. The lack of positive reinforcement within the superhero genre is an old style of writing featuring an archaic form of characterization within comics. Originally, physical deformity was a symbolic demonstration of moral devolution and therefore, was often reserved for villains. Many of them had often become physically challenged, such Heath Ledger’s Joker, or the Spiderman antihero, Chameleon while heroes were left pure, unblemished, and true shining examples of supreme beings. Despite this “perfection” the genre has been moving away from the black and white idealism of “super heroes” to a modern audience’s more preferred “flawed hero”; a “human hero” and someone who can be related to on basic levels. Characters are not perfect, however, their differences and unique traits should not be treated indifferently or as villainous due to their “super powers”. In the future, as we open the gates of diversity, hopefully mental and physical disabilities will be included in the invitation to grow. There is huge potential in creating larger parameters for characters who do suffer, and even simply increasing how these characters or portrayed by making canonically comic disabled characters (such as Hawkeye) also disabled within the larger movie universes. Characters who are both mentally and physically disabled are not invalids and are not villains. They can be great and do “good” with these hindrances, just as ordinary people do in everyday society.