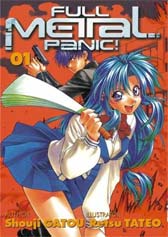 When Sosuke Sagura is put in charge of guarding Kaname Chidori from terrorist organizations he finds himself feeling severely out of place. Having never lead an average social life due to him having spent the majority of his childhood in war zones, he is seen as a military maniac by his peers. Slowly as the Sosuke and Chidori spend more and more time together they begin to understand each other and come to relate with one another.

The way in which the manga was not adapted chronologically into an anime may be seen initially as an odd decision. Many of the chapters in the first few volumes of the series were rather oddly excluded in the first series of the anime, and were included instead in Full Metal Panic? Fumoffu. However when this decision is further looked into it’s understandable. The director of the anime evidently wanted to set a slightly more serious tone in the first series (I’m grateful for this decision); therefore, faithfully adapting the manga wouldn’t have really worked. Whilst the opening chapters were all hilarious and highly enjoyable, Sosuke and Kaname’s relationship doesn’t really go anywhere until the end of the book. It’s really just gag after gag, with no real substance to it; however, as you go through the book you begin to question Sosuke’s origins and motives. This sense of wonder is increased as scenes showing his superiors gradually become more frequent – evidently paving the way for the series to reveal its interesting core plot. Skipping these initial chapters did allow the anime to be less episodic and therefore enabled it have more immediate character development.

Whilst Kaname is the typical feisty high school manga girl, Sosuke is an interesting choice for a character protagonist. Having an almost Belldandy (Ah! My Goddess!) -like personality – in the respect that he is naïve to the majority of social conventions – means that  (due to it being a Seinen series) the creative team has prevented the series from becoming a harem. Despite this, it is clear that Kaname, and many of the other female leads, were evidently meant to have a great more appeal; however, I believe that this may have been because the creators wanted the series to fit in with Monthly Dragon Age’s house style and audience, and therefore, have a greater readership. Thankfully, the series doesn’t turn into a harem, although later on towards the end of the series there are some questionable scenes involving Kaname and the Colonel discussing their desire for Sosuke, but these didn’t detract from my overall impression of the series.

Whilst Retsu Tateo’s artwork is flawed (it isn’t particularly detailed, character designs are not always consistent and panels often feel bare), sequentially every panel works. Evidently she has a clear understanding of how important timing is in comedy. The dramatic emphasis on the punch lines makes each gag all the more hilarious. The comedic effect is further emphasized by the brilliant expressions each character has, both making characters more surreal and more likable.

So then, after twelve years has the first volume of the series aged well? Whilst it is certainly true that both the writing and art work are sometimes off due to the strange pacing and the late use of character development, the first volume is still as hilarious as ever. It really increases the comedic effect and makes the book really enjoyable.

While the series is currently out of print I’ve found that it is available to buy quite cheaply second hand at play.com and Amazon. I bought ADV’s English edition of the book that contained six pages of color.

Posted on Nov 14, 2012 by
WillStocks
I really enjoy animation, manga and games. As well as writing articles I write plays and draw frequently. Follow me @stocksatron
Follow

Yuri: An Indepth Look at Women in Love
Akame Ga Kill and the apolitical revolution
Happiness, a exploration of Nihilism.
The continuation of the Berserk manga series, a blessing from the skies or a curse?
What We Can Learn from Survival Game Shows
Legacy and One Piece
How My Hero Academia treats it’s villains