No, this is not the same as Full Metal Jacket or Fullmetal Alchemist. Full Metal Panic! is one of the well-known mecha anime titles you may have come across. Perhaps you recognize the girl with the long green hair? If you hadn’t already guessed, her hair wasn’t originally green! The light novels, which is what the anime was based off of, describe Kaname Chidori as having black hair, like an ordinary Japanese student. Surprised? 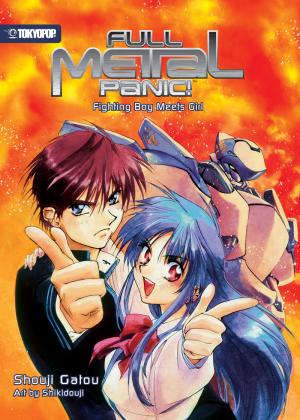 Light Novels are commonly adapted into anime, in the same way novels get translated to movies. Full Metal Panic, by Shoji Gatou went for a lot longer than the anime series would have you believe. Twelve volumes were released, between December 1998 and August 2010. From there, short stories and a sequel were written. The anime by GONZO and Kyoto Animation only reached volume 5 – that’s a whole 7 books that didn’t get made for TV! For those who don’t know, FMP! is about a young girl named Kaname Chidori who unknowingly gets assigned a soldier as a bodyguard, for reasons she has yet to find out! You can see a trailer, here.

The first 5 Light Novels were released in English by Tokyopop. Unfortunately, they went out of business and never completed the series either! It seems the only way to get copies of it now are Amazon and Ebay. In comparison to the anime adaptions which are altogether inconsistent in quality, and the manga drawings often change styles, the Light Novels are where you can get the full story, with as little filler as possible, and with a unique experience you only get from the magic of writing (understanding the characters’ thoughts for example). Once the english versions run out, the manga Full Metal Panic! Sigma, continues from where The Second Raid starts, and has overlap with the following novels. If you’re unwilling to cash in some bucks for a light novel, that manga series is another way to go.

To date, this series presents one of the most epic love stories I have come across in anime (paralleled only by Rahxephon, perhaps), but it combines action, comedy and drama, to the point where it has something for everyone. Sousuke Sagara is my favorite male character in an anime thus far! While the plot is quite repetitive, it is decent – the characters are what make it special. The writing isn’t Stephen King standards, but it is better than others of its type. It accurately conveys the moods and atmosphere it intends to.

Highly recommended, no matter who you are.

Posted on Nov 16, 2012 by
Jordan
I started writing about anime when I was 15 and it looked far worse than this. If you like my articles, check out my Goodreads to see what I'm reading.
Follow

How D. Gray-man Challenges Readers to Look Deeper
Akame Ga Kill and the apolitical revolution
Happiness, a exploration of Nihilism.
The continuation of the Berserk manga series, a blessing from the skies or a curse?
What We Can Learn from Survival Game Shows
Legacy and One Piece
How My Hero Academia treats it’s villains