There are certain shows where there exists a clear divide between right and wrong. They take the guess work out for the viewer by presenting a static protagonist and a static antagonist, and let the story develop from there from places where you can see around the corner. On the other hand, there are those where the viewer is not given the same courtesy. Shin Sekai Yori, or From the New World, fits that bill. As soon as you thought you knew the answers, Shin Sekai Yori changed the questions. 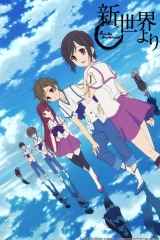 Shin Sekai Yori was a dystopian sci-fi anime based on the Best-Selling Japanese novel of the same name. The series centered around Saki Watanabe and her group of four friends at school in a seemingly utopian town in Kamisu’s 66th district, roughly a thousand years into the future. All five children possess their own forms of special telekinetic powers. Those powers are also possessed by the leaders of the world and throughout the series, those powers prove themselves to be a gift, as well as a curse.

In the same world exists creatures known as Monster Rats that live among themselves in sub-colonies outside of the area where the humans live. To the Monster Rats, humans with the telekinetic powers are seen as god-like and seemingly highly revered. The Sub-colonies of the creatures are all separate and have their own sense of governing, but have affiliations and divisions amongst themselves that prove problematic at times.

Certain events take place throw the original balance of the exposition out of whack, creating differences for the worse. The original quintet dwindles, the hero worship between Humans and Monster Rats sours, and the skeletons of the utopia inhabited by Saki and friends are revealed as the town to be another product of a gilded age.

For most viewers, this series existed on the outside edge of the realm of predictability, before jumping into the realm of “seriously, what just happened.” Every aspect of the series had their moments of surprises. Whether it’s the life, love, or war, there wasn’t much that one could honestly have seen coming with great certainty. Shin Sekai Yori was mildly popular, but overall unheralded to in the grand scale of the anime community. In fact, I never saw a link or advertisement for it, but rather heard about it from a good friend. But that lack of notoriety was not for a lack of compelling nature. There’s are a few different twist that occur in the show that should prove it to be well-worth your time.

And those are (Major Spoilers Ahead)…

In most cases, the romantic connections of a story story is one of the most predictable aspects of it. This is not quite the case in Shin Sekai Yori. The first signs of romantic entanglement arise when Saki, Satoru, Maria, Mamoru, and Shun are all 12 years old on a summer camping trip. While the group takes their boats to the water in what turns out to be quite the experience, Saki and shun spark up a bit of an infatuation for each other. From the boat ride, to meeting a False Minoshiro, to their harrowing encounter with the Monster Rats, they seemed to grow closer.

Fast forward two years after the incident. The group still appears together in school, but there’s been a change. Saki still shows interest in Shun, but the feeling is not reciprocated as Shun seems more interested in hanging around Satoru than acknowledging her. Later on, Saki sees Shun momentarily alone in a field, before hiding behind a tree when she sees Satoru soon to follow. While the two roughhousing was not a surprising sight, the passionate kiss that the two boys shared certainly caught Saki and much of the audience off guard. Not only this, later on it appears that Saki and Maria had become lovers as well. What a difference a couple of years make.

During the group’s ever eventful summer camping trip, they met a Monster Rat named Squealer. He was a cowardly, yet harmless creature that was grateful to have been saved by the five friends. In the midst of showing them his appreciation, they got a slight tour of his Robber Fly colony. During this they say the queen monster rat who, as based on the way Squealer described it, was growing old, angry and insane. This seemed to be a problem the Robber Fly colony was going to have to adjust to as every colony had a queen and she was responsible for the continued reproduction of their people.

The same amount of time passed between the initial event and the twist again, as two years later Saki and Satoru have found themselves in the company of Monster Rats once again. This time, it’s to search for Maria and Mamoru, who had fled the town for a multitude of reasons that could only be explained by watching the series. If Saki could not return them within three days, The Board of Education was going to have Maria and Mamoru destroyed. During the search, gets knocked unconscious and comes to in the familiar setting of the Robber Fly colony with Squealer. This time, seeing the queen solicited a much different reaction. In the time between the first and second visits, the queen had become a gruesome sight to behold, as a result of being lobotomized and reduced to a baby factory with a vacant look with a hint of shock. Squealer justifies this as being the best thing for the colony that the queen would be happy to know of her purpose. That message may not have been completely delivered over the strong sense of horror that this scene conveyed.

This one doesn’t occur in an instance, but was rather systematically built up since before the setting of the beginning of the series. Fast forward twelve years into the future to see that the former group of five had been cut to just two. Saki is now 26 years-old and now works for the Department of Mutant Management when she gets a visit from her old friend Satoru, whom she had lost contact with. He informs her of a Monster Rat attack that seems to have been related to the battle between the two factions that the colonies had broken up into. One led by the leader of the Giant Hornets colony, Kiroumaru, and the other led by the leader of the Robber Fly colony, Yakomaru, who is formerly known as Squealer. This sparks a war between colonies that soon becomes a war against humans led by Yakomaru, who was able to easily defeat Kiroumaru’s clan with his secret weapon. That weapon turns out to be an ogre, a human child raised by Monster Rats with immense and uncontrolled power. Yakomaru becomes a real threat to mankind, until Saki, Satoru, and Kiroumaru devise a successful plan to defeat the ogre, rendering the creature formerly known as Squealer powerless.

As the result of every war in modern history, the losing party must be held accountable for the casualties. Apparently, this will be no different in the next millenium. While Yakomaru is being held trial to answer for the horrific acts against humanity for which he was responsible for, he flips the script by claiming humanity forced his hand. While this claim seems ridiculous at first, the evidence says otherwise. When asked what he is during the trial, Yakomaru, who has demotes himself back to the name Squealer, vehemently screams, “I am human,” which is met by laughter from the board. After Yakomaru is sentenced to “Eternal Hell”, which is constant torture without the fortune to die, Saki is told by Satoru that the Monster Rats are in fact humans, who were injected with mole DNA to prevent them to being a threat to those with the power, and being able to kill while avoiding the Death of Shame, dying from killing one’s own people. Saki meets this news with shock, and decides that Squealer has had enough and puts him out of his misery. While the identity of the true villain is up to the opinion of the viewer.

Shin Sekai Yori was a roller coaster of action and emotion that proves itself to be worth every minute spent watching it. If you’re thinking that there’s nothing else to be seen after reading this, then you’d be pleasantly surprised to know that there’s still tons of surprises that weren’t mentioned in this article. So if you haven’t you’re not turned off by knowing the ending, I highly suggest giving it a watch.

Posted on Jun 26, 2013 by
Dominique Kollie
Freelance writer interested in Music, Sports, Anime, and many other artforms. College student interested in writing for a major publication by day, and writing comics by night
Follow