Snow White and the Huntsman Review: More than just a pretty face 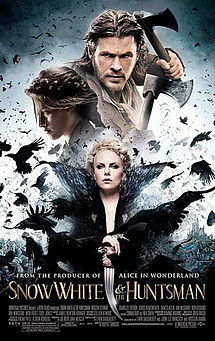 Upon first look, it seems that Snow White and the Huntsman is a movie that is simply meant to be pretty. The first thing one might notice, either from previews or posters, are the three stars: Chris Hemsworth, Kristen Stewart, and Charlize Theron. Also, it is a film based on a fairy tale, which are known for their dazzling imagery and beautiful scenery. But it’s definitely more than just a pretty face.

The story of Snow White is familiar to all, but there are none quite like the story this movie tells. The Evil Queen, Ravenna (Theron) is a very powerful woman with a very wicked plan: to take over every kingdom in the world. Among her many magical powers, her beauty is also a dangerous weapon, for she uses it to allure kings and take everything from them. When she takes over King Magnus’ kingdom, she kills him and imprisons his daughter, Snow White. When her magical mirror informs her that Snow White is the only person capable of defeating her, as well as the only person who shall become more beautiful, she plans to kill her. Snow White escapes the kingdom, and Ravenna sends a local huntsman to get her with the promise that she will bring his wife back from the dead. The Huntsman and Snow White meet in the very dangerous Dark Forest, where strange creatures lurk, and many men have gone to die. When he discovers that Ravenna lied, and he will not see his wife again, he makes it his duty to protect Snow White. They travel all across the land, fleeing from the Queen’s men, and meeting several other colorful characters along the way.

When creating a movie about a story that is so familiar across the world, it’s a large task to undergo. There’s the question of creating something unique, while at the same time, staying true to the story that everyone knows. When it comes to Snow White and the Huntsman, the crew did a wonderful job. Director Rupert Sanders, the writers, cinematographer, set designers, and visual effects artists all knew exactly what they were getting into–and they lived up to the task. Sanders directed the actors in a way that made their characters all likable (or easily hated). The writers took the story of Snow White in a completely new direction that was innovative and interesting, though it did find Kristen Stewart in yet another love triangle. The set designers and visual effects artists were wonderful at creating scenery and creatures that were aesthetically pleasing. The cast must also be praised for their performances. Hemsworth was great as the huntsman, who was a sympathetic yet very strong character. Theron was wonderfully wicked as the evil Queen Ravenna. And even Stewart, an actress known for bland performances, stepped it up.

Snow White and the Huntsman was a beautiful film that captured both the dark and magical sides of fairy tales. It offered beautiful scenery and actors alike, but it was more than just a pretty face. It had action, romance, humor, and a twist that probably few have seen before. Though most of the crew are fairly unknown, they definitely stepped up to the task of creating a unique story out of something very familiar. I have high hopes for what they will create in the future.

Posted on Nov 27, 2012 by
JenniferWard
I'm a writer, blogger, movie lover, and all around weird chicka from Northeast Georgia.
Follow