Superman Earth One vol 2 review: a comic for everyone 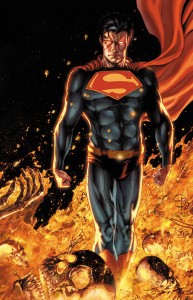 J Michael Straczynski (JMS) and Shane Davis’ second volume of their attempt to redefine the Man of Steel has arrived and it was worth the wait. For those not familiar with Earth One, it is DC Comics’ attempt to create original graphic novels of the classic characters for a modern audience. The origins are basically the same; what changes are the settings and situations that the characters find themselves in.

These new circumstances form the basis for the new characterizations of heroes that are, by now older than most of the readership and Superman in particular has been showing his age in the last decade or so. How do you keep a powerful & iconic character interesting and relevant? According to Straczynski & Davis, by taking a moment to think about Superman and the world, how these two things would affect each other and what would come as a result. The result is an emotionally powerful, touching and convincing version of this classic hero. More importantly, it succeeds brilliantly in creating an avenue for new readers of both genders; the holy grail of comic book publishing.

Superman has been active for a short time since the first volume in this series, but don’t worry, you do not need to have read that volume to follow this one. Any information you need from the first is given in this volume, and unlike many comics, you don’t feel like they are treating you like an idiot by giving it to you. The exposition needed in this type of story is expertly delivered and seamless. You don’t really even notice you are getting it until it all fits together.

The world is divided into the groups that want to trust him and those that are afraid to trust him. Here is a being of unimaginable power that seemingly has humankind’s best interests at heart, but with no clear motive for his actions. For every citizen that trusts and admires him, there is a faction of the power structure in the world that fears him. As the building block for the world of Earth One this love/fear scenario is obvious, less obvious is where JMS chooses to go with this. While it is true that there is an undercurrent in this book of the big bad government trying to find a way to “kill the indestructible man,” the main focus of this is actually the normal people that encounter both Superman and his alter ego, Clark Kent.

Lois Lane is here, but not in a familiar way. Modern readers are used to them being friends or spouses, but not as someone who distrusts Superman and Clark equally. Her investigation of Clark is fuelled by her jealousy of him, but reveals much of the heart of this new character.  That heart then is seen in Clark getting to know a pretty girl who is clearly and instantly attracted to him. There is pain inside both of them. They both feel an almost unbearable isolation that comes out as they get to know each other. The back story of both is revealed here to varying degrees and it is the most powerful and important part of this story. For the first time in my lifetime of reading comics, I can identify with Clark. He is human when he is not wearing the blue tights, and yet his alien nature has made him lonely all his life. All he wants is to respond to this girl, but he fears for her safety if he does; not because of a super villain, but because of the comparative frailty of humans. That frailty is described perfectly by Clark’s now long gone father as “Man of steel, woman of tissue paper” analogy. The power that every geeky fan wants is a crushing burden to Clark.

He is every shy high school kid trying to get to know a girl, and while she practically throws herself at him, she too is scared of her world pushing Clark away. They each have a secret, and the fear of the others’ reaction is like a third person in the room. Clark’s story of his only real friend growing up put a lump in my throat and made me care about him for the first time in my life.

JMS’ story is nothing short of flawless in its construction and execution. This book is everything that his Grounded arc in the regular Superman book failed to be. Shane Davis’ art is even better this time than in the previous volume. His art improves every time he puts pen to paper. There are times when his line weight fails to provide a balance between foreground and background, but some of that is corrected by the coloring. While he occasionally goes off model in the character depictions, and it is sometimes difficult to tell them apart, for the most part this book is visually amazing. There is one point where the pages tilt sideways, which fails completely and pulls you right out of the story, but beyond that this book feels like the movie we all wanted Superman Returns to be. There were several points reading this that it felt like seeing a movie.

While the visuals are a strong part of that, the lion’s share of the credit goes to JMS.  This feels like an important story. There is emotional weight here that creates a connection with the reader that is rare outside of the movie viewing experience. This is not Christopher Reeve, or even Brandon Routh. This is an entirely new Superman based on foundations that we should all recognize.  I don’t care if you read comics regularly or have never touched one. I also don’t think your gender will matter either. This is a book anyone who wants heroic fiction can enjoy.

If you have enjoyed the super hero films of the last few years but have not bothered reading the comics that started it all, this is the book for you. There is finally a book that might just make the leap into the hands of people that have avoided comic books.  Now, jump! You won’t regret it.

Posted on Nov 10, 2012 by
Taylor Ramsey
While I quietly wait for a really good excuse to go on an interstate mayhem spree, I read comics and watch movies. While I do the "writing" here, my wife makes it readable.
Follow