The Last Stand trailer: Arnold is Back!

A new full-length trailer has been released for Korean director Kim Jee-Woon’s action film The Last Stand. The movie stars Arnold Schwarzenegger as the sheriff of a quiet border town who becomes the last line of defense against a drug kingpin who has fled an FBI 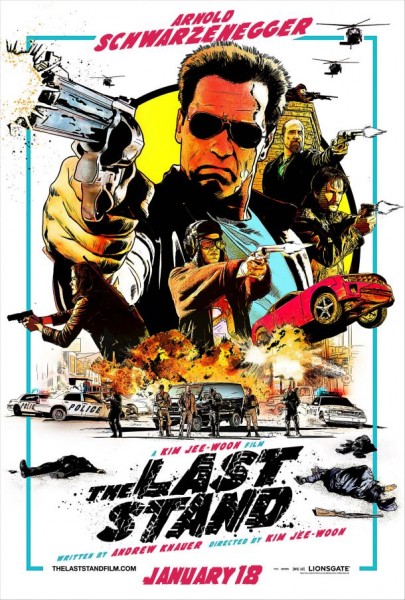 prisoner convoy, and is trying to make his way into Mexico. The trailer features tons of action moments, along with some comedy bits spread throughout. There seems to be lots of genres mixing here, but Schwarzenegger and company seem to be up to the task. This will be the actor’s first starring role in a very long time, so it’s pretty kick ass to see him back in movies. This also marks Kim Jee-Woon’s introduction to American audiences with his first English speaking film. Jee-Woon has an impressive resume coming out of Korea with such films as I Saw The Devil and The Good, The Bad, and the Weird. He’s very capable of pulling off an action film like this, and it should prove interesting to see how he handles the Hollywood way of things.

The film also stars Forest Whitaker, Eduardo Noriega, Rodrigo Santoro, Johnny Knoxville, Jamie Alexander and Peter Stormare. The Last Stand is due in theaters January 18, 2013. Check out the trailer below!

The official synopsis for The Last Stand:

Action icon Arnold Schwarzenegger makes his much-anticipated return to the big screen in Korean director Kim Jee-woon’s hard-hitting US directorial debut, THE LAST STAND. After leaving his LAPD narcotics post following a bungled operation that left him wracked with remorse and regret, Sheriff Ray Owens (Schwarzenegger) moved out of Los Angeles and settled into a life fighting what little crime takes place in sleepy border town Sommerton Junction. But that peaceful existence is shattered when Gabriel Cortez (Eduardo Noriega), the most notorious, wanted drug kingpin in the western hemisphere, makes a deadly yet spectacular escape from an FBI prisoner convoy. With the help of a fierce band of lawless mercenaries led by the icy Burrell (Peter Stormare), Cortez begins racing towards the US-Mexico border at 250 mph in a specially-outfitted Corvette ZR1 with a hostage in tow.

Posted on Nov 10, 2012 by
Mike G
I'm an absolute film buff, and love writing about movies and TV. I'm particularly a fan of Asian cinema and hope to introduce people to truly great films from that region.
Follow