The Mentalist: Who is Red John?

With The Mentalist’s fifth season concluded, and a big secret revealed, it’s about time that we look and see who could possibly be the feared serial killer, Red John. In the end, though, it is ultimately up to series creator, Bruno Heller to tell us who is the murderer of Patrick Jane’s family.

Throughout the series, fans have created theory’s involving Jane being Red John, or his partner Agent Lisbon. Series creator, Bruno Heller has said that Red John is one of the seven listed, meaning neither Jane nor Lisbon are the culprit. Now it’s time to determine who, out of the seven, could be Red John.

Possibly the most surprising name on the list, Reede Smith was introduced in the season five premiere. Since then, he hasn’t appeared in any other episodes. His poor temper, especially towards Jane, makes him a likely suspect. His first name, Reede, is also very similar to ‘red’.

Chances of being Red John: 40% 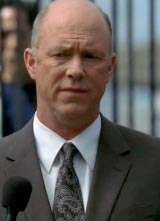 This name didn’t come to much of a surprise. As head of the California Bureau of Investigation, Gale Bertram seems to love power, and winning. Red John has bragged about constantly being one step ahead of Jane and Bertram has been seen as overly invested in casual games of poker. He has never been fond of Patrick Jane, to the point where he tried to prosecute Jane to the full extent after Jane murdered a man believed to be Red John.

Despite this, Bertram has never indicated that he is highly intelligent and he appears to fear Jane, which would seem unreasonable if Bertram was Jane’s arch-nemesis. The fear lies mostly in the fact that Jane does whatever he wants, without care for the consequences. This is likely a fear the Red John does not share. His late introduction, like many on the list, also brings doubt to the possibility of them being Red John.

Chances of being Red John: 45% 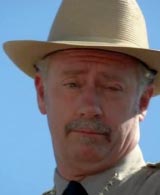 This is also a surprising name as McAllister only appeared in one episode. Like Reede Smith, there is very little to prove, or disprove, that the sheriff is Red John. It has been confirmed that Sheriff McAllister will return for season six, which might mean that he will be disproved as Red John or the character will be given a larger role.

The biggest problem with him being Red John is his age. Red John is most likely between the age of 35 to 50. Xander Berekley, who plays McAllister, is 57, but he does look older.

Chances of being Red John: 50% 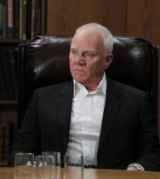 Being the leader of the cult, Visualize, his relationship with Patrick Jane has been rocky. Bret Stiles has been able to brainwash a large community of people and his intelligence matches Jane. In many ways, he is just like Red John. They both like Jane, but are no where near friends, and Stiles has gathered followers in a way similar to Red John’s disciples.

There are a few issues with Stiles, though, his heightened age being the most prominent. It’s hard to imagine a man closing in on 70 years being able to murder the amount of people that he did. One could argue that he receives help from his followers, but a rebuttal would be that Jane would easily find discrepancies between the crime scenes if that were the case. While suspected by Jane since their first meeting, he has doubted Stiles brutality. In one episode, Jane said that Stiles “wouldn’t hurt a fly”.

Chances of being Red John: 60% 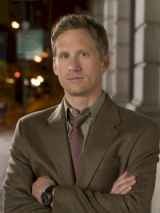 First introduced in the episode Little Red Book, we, the audience, are immediately led to dislike Ray Haffner. In his next appearance, we not only find out that he is a member of Visualize, but he might have been at the camp where the first Red Smiley was painted. These two facts, along with his age, make it likely that he is in someway connected to Red John.

There isn’t much to say that could disprove the fact that he might be Red John, but this has led to fan speculation that he is just a red herring. The only trait against him is that he appears far too strong, which differs from what characters who have met Red John have claimed about him. It would make sense for him to be a red herring because he fits all the requirements to be Red John a little too perfectly.

Chances of being Red John: 70% 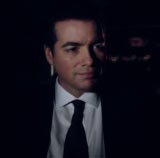 Robert Kirkland, since his introduction, has been working in the shadows to destroy Patrick Jane. Kirkland has performed ruthless acts to find out just how far Jane is to solving the mystery of Red John. This means that Kirkland is either close to Red John or he is Red John.

The biggest argument against him being Red John is that Lorelei Martins, the one who told Jane that he had met Red John, was in prison when the two men met. His late addition into the series could also mean that he too is just a red herring, meant to draw the audience’s attention while one of the other candidates float by undetected. Oddly enough, extras resembling Kirkland have been spotted since the first season, but that is most likely just a coincidence.

Chances of being Red John: 75% 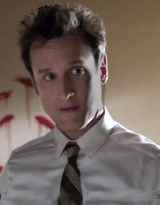 Introduced in the pilot, Brett Partridge has appeared throughout the series as a forensic investigator. It’s hard to imagine Bruno Heller would keep writing the character into episodes if he wasn’t Red John. People have spent a lot of time looking for ways to prove he is the dreaded serial killer.

First, in the episode The Red Sky of Morning, Red John recites a poem to Jane. Comparing the two men’s voices, Partridge and Red John, leads one to notice similarities in tone. Red John’s voice is muffled, but it is still a close match. The character Rosalind Harker described Red John as a normal looking man, neither strong nor weak, with straight hair. That matches Partridge for the most part.

One might argue that due to the amount of interaction with Partridge, Jane would have been able to figure out if he were really the murderer of Jane’s wife and daughter. While this might be true, Red John is a master showman, and this could be merely an act. Ms. Martins also said that she was surprised that Jane and Red John didn’t become fast friends when they first met. In the pilot, the two men bicker because Partridge argues that the crime scene is the result of Red John. The bickering has continued, but the two have always remained relatively civil towards one another.

Chances of being Red John: 85%

Out of the seven, Haffner, Kirkland and Partridge seem to be the likely suspects due to their personal relationships with Jane and how they act around him. Bruno Heller has said that the sixth season will be like a chase, with Jane searching for Red John. This leads one to suspect that the list might be cut down to half by the season’s end. One can only anticipate that Red John will be reveal sometime around season seven, making it one of the longer mysteries in TV history.

Posted on May 21, 2013 by
Austin Bender
I attend college in hopes to one day work in film or theater, but until then I write reviews on the subjects I love.
Follow