The Role of Choice in the Mass Effect Universe

Mass Effect is notorious for its morality system and dialogue options, having made a huge impact on the way RPGs are played since its debut eight years ago. By letting the player choose his/her own path and even create their own story, the game becomes a different experience for whoever picks up the controller. Choices become a vital part of how the player experiences Mass Effect, and change the way the game presents itself, even going as far carrying over the decisions made into the next two titles in the franchise and continuing to affect the game. However, how does having so many choices and personalization options affect the player’s relationship with the game?

It is important to understand how Mass Effect works before delving into the effects it has. When booting up the first game in the series, gamers are able to choose the gender, the history (Earth-born, colonists, spacer), the psychological profile (ruthless, sole survivor, war hero), and the class/military specialization (soldier, engineer, infiltrator, sentinel or vanguard) for their character. From the very first moment players step into the Mass Effect universe, they’re given a variety of options. With 108 different combinations, Commander Shepard is very apt to cater to each player’s unique desires for their character. After the creation of your Shepard, players are thrown aboard the Normandy under Captain Anderson and given the run-down about how dialogue options work. Initially, the game only allows for a few, however by raising their Paragon or Renegade stat players can gradually build up to unlock more options. 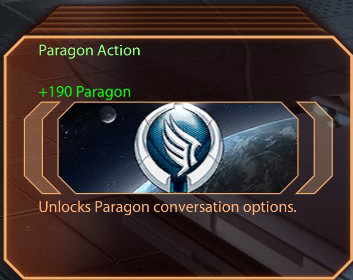 The system in Mass Effect, instead of being the more common moral dichotomy between the ‘good’ and ‘bad’, harnesses a more complex system. Games like InFamous are known for their clear line of good and evil with no grey area, while Mass Effect thrives off of said grey area. To use terms gamers are familiar with, The Paragon route would more closely be considered to ‘lawful good’ while the Renegade route is ‘chaotic good’. While players may choose to try to be purely Paragon or just raw Renegade, the game allows you to find a happy balance between both and deviate from each. Thus, there is no ‘good’ versus ‘bad’ working against each other. Lastly, for players who wish to engage in some in-game romance, the first game offered fewer options while the second and third instalmments offer more variety. Shepard’s sexuality becomes more flexible, allowing the same-sex romance scenarios.

As Mass Effect lets you have dialogue options, the decisions Commander Shepard must make only become more and more difficult. On more than one occasion, Shepard is given the choice to save one team-mate over the other, drive entire species to extinction or save them, to cure a life-long disease one species created to control the other or let them continue to suffer, and while the right decision isn’t always clear, players learn to live and deal with the consequences. Having this very ability to make the tough calls and decisions within the game furthers the feeling of authenticity, allowing players to think that they are in fact, Commander Shepard. The game trusts players to make the right (or wrong) decisions, basing itself entirely on the calls the players make gives you a real experience. The lines between the reality of it begin to blur as BioWare perfectly captures the aftermath and consequences in the choices players make, forcing the player to live with them throughout the trilogy.

Every gamer who has picked up a copy will have a different story to tell you about how they experience the game, and it makes it all more personal. The gamer’s relationship with the game thickens as you are the one in control of nearly everything. The experience itself is personalized to meet the needs/wants of each and every player. The choices you make reflect your Commander Shepard’s character and gamers find themselves portrayed within this Commander (if you choose to play the game that way). The last installment in the Mass Effect Series bases the eight different endings on decisions made throughout the game. The experience in itself is such an intimate one, as players project themselves onto the character of Commander Shepard. BioWare harnesses raw emotions by taking the time to introduce the different characters the Commander interacts with, giving them each unique personalities and planning for each different Shepard they encounter. The developers make these characters seem as authentic as possible and thus making gamers want to portray their own Shepard as genuine as they feel it to be.

While some gamers might let all the control Mass Effect gives them to go to their head, others (such as myself) hold the game very close to their heart. In this day and age it becomes less rare to share such an intimate experience with a game, however the Mass Effect Trilogy gives each gamer a different story to tell. The variety of choices and personalization affects the player’s ability to portray themselves as accurately as they wish in the Mass Effect universe should they choose, thus making the experiences felt throughout the game feel as though they happened in the real world to the player.

The personalization and depth presented in the Mass Effect game trilogy is nearly unmatched by any competitors today. To go from playing a game where the experience is catered to each person’s needs/wants for their main character as opposed to a game that plays in a more linear sense is a strange sensation. The role that choice plays in video games as a whole really leaves you guessing as to what is coming next, and despite reading countless reviews or plot summaries on the game, you have the ability to experience it in a different way whereas a linear game tends to become predictable (though, not in all cases) and players may find themselves suffering from frustration or second-hand embarrassment from the things the linear main character may say or do.

The personality of whoever picks up the game is reflected back at them on-screen through the choices and decisions made by Commander Shepard. If a certain character gets on your nerves, this game gives you the Renegade option to deal with them, while if you feel pity or care deeply for another character, the Paragon or neutral option is there for you. The developers capture authenticity with each and every character by showcasing each individual throughout missions and through the immersive storyline.

The role of choice in the Mass Effect series allows each player to have a unique story to tell about the game, and undergo different situations that shape their Commander Shepard to fit the exact mold you’re looking for in a game, and be the main character you’ve always wanted. Having choice bridges a gap that so many other games can miss, by allowing players to choose their path instead of having it planned out ahead of time. Mass Effect captures the essence of actually having to be Commander Shepard, to have to make those tough calls. Mind you, Mass Effect isn’t perfect in the system, but it does not have the same linear feeling that other games have — the game takes into account your decisions, your choices, allowing you to fully immersive yourself in it and all while you kick some Reaper butt. What more could you want from a game?

Here’s to hoping Mass Effect 4 won’t let us down either.