This Is 40 Review: An Example of Purposeful and Effective Aimlessness

This Is 40 was one of the most highly anticipated comedy films of 2012, and with good reason: Judd Apatow was writing and directing, the cast was excellent, and this was a spin-off from Knocked Up, Apatow’s second best directorial effort in my opinion, behind The 40-Year-Old Virgin.

Prior to the film’s release, my only concern was whether or not Apatow would be able to rebound from the most recent film he directed — the highly mediocre Funny People. Then, however, my concerns multiplied when This Is 40 began to receive mixed reviews, with the consensus that while funny, the film was too long and oftentimes aimless.

Nevertheless undeterred from seeing the film, it became apparent that this perceived “aimlessness” was quite intentional on Apatow’s part and ultimately very effective. Think about it. The film is called This Is 40. Do the middle-aged years of a struggling married couple lend themselves to a concrete plot with a typical three-act story structure? I might be only 23 years old and yet to experience the tumultuous nature of this life stage, but I feel valid in asserting that these years typically do not have a clearly discernible and linear plot. For Debbie (the underrated Leslie Mann, Apatow’s real-life wife) and Pete (the always-great Paul Rudd), every day is a challenge in trying to manage financial problems, work-related issues, the maturation of their children, and of course, the myriad of minute problems between themselves that often bring each person to a boiling point. 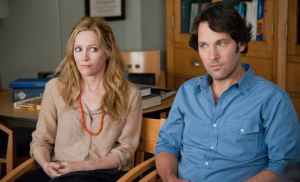 This Is 40 purposely avoids depicting one specific problem and showing the journey to its resolution through a clear beginning, middle, and end. Instead, it embodies “40”. The film is a series of seemingly disjointed events and social situations that together depict all the ups-and-downs and countless concerns of people in this stage of their lives. Sometimes things are going well for Debbie and Pete and everything is jovial and hilarious. Other times things are going very poorly and there is fighting and sad situations (though things are still typically hilarious, as Apatow never forgets that this is a comedy after all, and that these sometimes serious problems are easier for experienced people to digest when delivered this way). Sometimes the issue is something as simple as Debbie thinking Pete eats too many cupcakes. Other times it’s as large-scale and difficult as Debbie unexpectedly becoming pregnant or Pete not making enough money to be able to afford the family’s house anymore. Given this, some will complain that this movie is unbalanced. I counter that if the movie were more balanced, then it wouldn’t be as accurate a depiction of its titular subject matter.

The film’s hilarity is bolstered not only by the performances of Mann and Rudd, but also by a terrific supporting cast that includes Albert Brooks, John Lithgow, Jason Segel, Chris O’Dowd, Megan Fox (whose acting was actually not horrible), Melissa McCarthy (who actually managed to not annoy me too much), and Apatow’s real-life daughters — Maude and Iris — as the daughters of Debbie and Pete. Apatow’s sharp writing and hilarious commentary on how our society is becoming completely absorbed by any device with a screen also helped; I imagine that since 75% of the film’s featured family was his real-life family, he was more easily able to draw from his own experiences. On the other hand, though, while we know that this life stage can be extremely tumultuous, I hope for his sake that his family situation isn’t quite that problematic.

The film did feel a little too long, but I’d be inconsistent in my argument if I said that didn’t relate to its purposeful aimless quality, as without a concrete plot, there was no real good stopping point. In the end, the aimless nature of This Is 40 did have an aim — to show what family life in one’s middle-aged years can be like, which it did so very effectively. The film will not prove to be as good or memorable as The 40-Year-Old Virgin or Knocked Up down the road and wasn’t among the year’s very best, but much of its criticism seems misguided.

Posted on Jan 7, 2013 by
Tom Dianora
My name is Tom Dianora. I'm a 23-year-old yuppie (though not like Patrick Bateman) living in LA. I have a passion for film that I like to tap into through writing.
Follow