Best of 2012: The top 3 Shojo and Josei Animes which aired this year

Whilst every year only a few shojo and josei mangas get adapted into animes, with the exception of some shows such as Say ‘I Love You’, 2012 has arguably been a particularly good year for both adaptations and new IP’s. Rather than being solely romance shows a wide variety of genres was put out, many were refreshing and many took gave viewers a new perspective as to what shojo and josei is and can be.

What is shojo and josei you may ask? When literally translated shojo can mean girl and josei can mean woman. However in the context of anime shojo and josei stories tend to be either those which were adapted from a story in a shojo or josei manga magazine, or those whose primary audience are girls or women. These stories tend to be more drama orientated than the action which shonen and seinen is filled with (however this doesn’t mean that shojo and josei cannot contain action either). Whilst this type of anime is originally aimed at a female audience, as it’s stories become more universally appealing, it’s target audience is becoming more and more blurred, so don’t let these titles’ initial demographic put you off from checking them out!

So without further do, let us commence with number 3…. 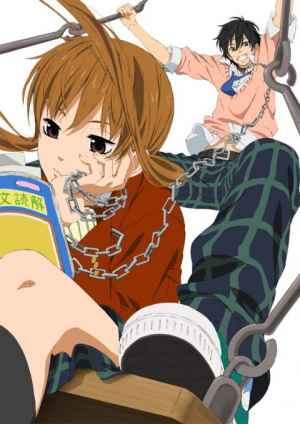 Midway through term Mizutani Shizuku, a diligent and hard working student who’s sole interest in life is to work and study, is asked by her teacher to deliver some handouts to Yoshida Haru, a boy who rarely attends school and suffers from frequent violent outbursts. After completing this errand however Shizuku is yet again asked a favour of her by her teacher – she is asked to get Haru to attend school regularly to prevent his expulsion. As a result of attempting to do so however, Shizuku finds herself being the target of Haru’s affection. As the two begin to spend an ever-increasing amount of time together Shizuku begins to find herself falling for Haru, but is her love the same as Haru’s?

Whilst My Little Monster is a Romance anime, typical tropes and scenarios which occur frequently in this genre are thankfully left out, there isn’t an imbalance between characters (as there is in Say ‘I love you’) and there isn’t an overuse of screen tone like animation sequences, this allowed the show to be refreshing and compelling. Shizuki and Haru’s feelings are reasonable and understandable, and through the way in which they cover up their true feelings with their personality – whilst Shizuki does so through being constantly serious, Haru does this through being silly and aggressive- they are made even more realistic. Personally I was mainly able to relate to this show due to the themes of isolation that were explored. Whilst My Little Monster is categorised as a comedy there is certainly enough drama to keep a wider audience satisfied and I couldn’t recommend checking it out more. 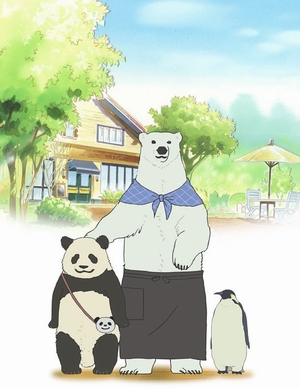 Polar Bear Café is set in a suburban café serviced by a Polar Bear, several of the customers which visit daily also happen to be animals, despite their obvious differences humans and animals mingle on a daily basis. Whilst Polar Bear has a habit of constantly making bad puns, Panda spends his days lazing around and drinking Iced Coffe in the café, Penguin on the other is very unsuccessful with women and constantly finds it difficult to strike up courage to ask fellow penguins to go out with him. Adding all of the three protagonists’ personas together creates an incredibly funny comedy which is not to be missed.

Whilst on the surface the anime appears just to be a simple comedy involving animals acting as if they were humans, beneath this lies a satire concerning modern day Japan and the habits of men. From Penguin’s inability to confess his love to Penko, to Panda’s lack of enthusiasm when it comes work and helping others, man’s traits are clear. However Polar Bear Café is just as strong a satire as it is a comedy, it strongly reminded me of Cromartie High School both because many of it’s characters appeared at times to resemble real life figures to a ridiculous extent and because of the fact that it is a well played satire on topics which are rarely admitted in society…and of course because Grizzly tended to act like a bad ass delinquent). Overall as well as being both one of the best Shojo animes Polar Bear Café was probably one of the best comedies of the year. 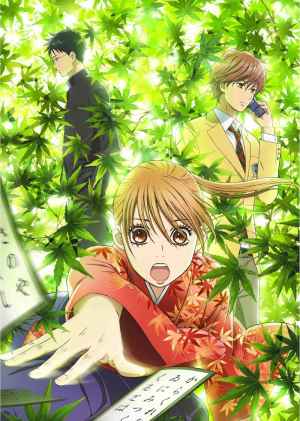 Chihaya used to be only interested in supporting her sister in her modeling career, however everything changes when she meets Arata Wataya – one of Japan’s most talented Karuta players. As Arata teaches Chihaya to play the game he encourages her to take on the dream of becoming the world’s best Karuta player. Years later after Chihaya has been separated with her Karuta playing friends, she still continues to play – with the hope that through the sport she will be reunited with them at tournaments.

Whilst Chihayafuru appears to be just a simple sports anime, it runs much deeper than that. Whether it’s the difficulties which Chihaya has had to face through being separated form Arata, Arata’s difficulty with coming to terms with his grandfather’s passing or Taichi’s reluctance to admit that he has feelings for Chihaya, the protagonists strong persona’s made the anime compelling. Whilst I wouldn’t argue that it is the anime Karuta itself was also incredibly interesting. Karuta is a card game which involves 100 cards, all of which have printed on them a different poem from the Hyakunin Isshu, throughout the game different poems from the sequence are read and the players must quickly determine which card is being read before their opponent. The game is made historically fascinating by the fact that each poem captures a period of Japanese history.

Therefore if you’re interested to learn about Japan’s history and culture, you are looking for good drama or you want to check out the best shojo/josei anime of 2012 then Chihayafuru is an absolute must!

Posted on Dec 24, 2012 by
WillStocks
I really enjoy animation, manga and games. As well as writing articles I write plays and draw frequently. Follow me @stocksatron
Follow