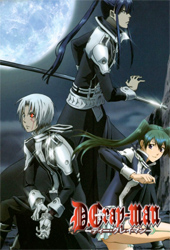 D Gray Man is organized as an episodic series, comprised of “mini stories” which stretch over 3 or 4 episodes each, quite like the character arcs of Kanon 2006. Each ‘character of the week’ endures an internal struggle with their values. To them, seeking the magical power of Innocence seems like the perfect resolution to their problems. That’s when protagonists Allen Walker and his gang collide with often opposing agendas. In this world, Akuma try to bargain with grieving individuals to resurrect their loved ones back from the dead. Little do their victims know, it comes at a price. Allen brings a new definition to the word Exorcist, as it’s his job to destroy these Akuma and bring peace to the land. Mystery, darkness, and plenty of fantasy gruelling action await for those who are not looking for an intricate story.

Alas, the plot is D Gray Man’s downfall. The manga was published in Shounen Jump from 2004 and has 28 volumes to date, proving to be a stellar title. The anime aired in 2006-08. While it is dark, it does not turn out to be as complicated or deep as one would believe from the commendable visuals and music. The themes and notions of “bringing the dead back to life” is something many have seen before, and done better. The show is repetitive in the same way Sailor Moon is: a monster of the week theme will have veterans rolling their eyes. Its predictability means you can watch the start of any arc, give or take 20 episodes, and still be able to follow the story.

The characters are a great distraction from this blaring flaw. Each one, while strange and distant at first, has stories to tell and unique traits. As the show takes its time to explain them, you can feast your eyes on the beautifully detailed backgrounds, and precision of the character designs. No two characters look the same. The colours are on the softer side but complement the medieval setting D Gray Man is part of. Best of all are the action scenes, which are fluid and well animated, with no short cuts. It is certainly a marvel that a show of 100 episodes manages to keep its animation consistent.

The sound, like the Gundam franchise, is another highlight. Opening and ending themes are well sung and catchy – for once the opening song isn’t superior to the ending theme! The score orchestrated by Kaoru Wada (you may know him from Kingdom Hearts or Princess Tutu) is beautiful. It brings back memories of Yuki Kajuira, at times dark, at others, whimsical. In one episode in particular, you will be blessed to hear a gorgeous insert song (sung by a doll)! The English dub is great – fan favourites such as Todd Haberkorn & Luci Christian step in as the main duo, Allen and LenaLee. All the voices fit the characters and are acted well.

This is a long series, but is worth collecting if you are a fan of anime with a repetitive premise and great characters and a better than average story underneath. Despite its flaws, D Gray Man has got its heart in the right place. It is humorous, dramatic, and at times, romantic and touching. While the show is entertaining and mixes a bunch of genres together, I have seen the story done better in other projects. For those looking for something more in depth, Full Metal Alchemist should do the trick!

Posted on Dec 3, 2012 by
Jordan
I started writing about anime when I was 15 and it looked far worse than this. If you like my articles, check out my Goodreads to see what I'm reading.
Follow