It has become increasingly common for female characters to take leading roles in mainstream popular culture. Not only is female representation improving, it is also becoming less and less unusual to see female characters perform outside of their traditional gender roles in popular culture. The success of the 2015 action-film Mad Max: Fury Road, which features a female soldier as the main protagonist, has shown us how much we are changing in our attitudes towards strong women in stories. This change is not limited to film and television however; Japanese animation frequently challenges and toys with the concept of gender as well. Numerous animated series and films from Japan feature strong female characters, strong female protagonists, and even predominantly female casts. Many take the step further, by tearing down conventional notions of gender at a fundamental level. The 2012 anime Girls und Panzer is one such series that attempts to do this by exploring alternative ways to view gender role and gender performance, and can even be read as work of deconstruction.

Girls und Panzer or Garupan for short is set in a universe in which tank warfare is widely practiced as a sport, known as “senshadō” or “way of the tank.” An important quality of the sport is that it’s practiced exclusively by women, usually high school or college aged. The series’ take on gender is particularly noteworthy in how attempts are made within its universe to redefine notions of femininity. The role that senshadō seems to play in shaping women in this society is made evident when the sport is first being introduced to the protagonists. In a presentation to the promote sport to the school, senshadō is advertised as a martial art that enhances a woman’s femininity by making her “become hot and tough as steel, as robust and lovely as caterpillar tracks, and as passionate and accurate as a cannon (Girls und Panzer).” It adds that those who take up senshadō will “without a doubt become a great wife, a great mother, a great career woman, and a woman who will appeal to many men (Girls und Panzer).” These assertions are particularly interesting in that the characteristics of tank combat, an activity that wouldn’t be perceived as feminine in the real world, are in a way forcefully associated with womanhood. Through this reassignment of ideals, it is demonstrated here that concept of gender can be largely rooted in social construction rather than biological division. 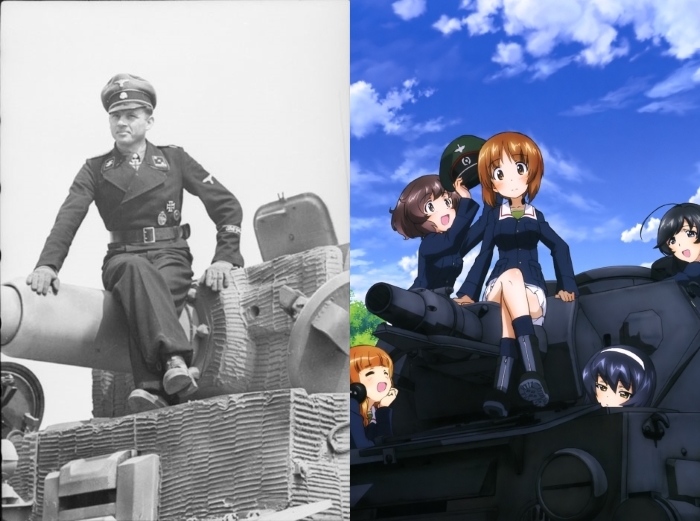 In regards to the character cast, the makeup of characters is overwhelmingly female and female-dominated. This largely stems from the fact that senshadō is practiced exclusively by women in this universe. Boys of comparable age to the main characters do not appear in the series and the few men who do are usually family members, a small number of elderly men, or male bystanders. This gender makeup may not necessarily allude to a female-dominated society in the universe. However, considering how notions of femininity seem to differ significantly in this universe from that of the real world, one can infer that gender roles are far from traditional here. In any case, filling the cast with women and making senshadō a female-only sport works against the norm of male-driven storytelling and could very well serve to simulate what a female-dominated society could look like.

What is also telling about the cast, in addition to the shortage of men, is the way the men themselves are portrayed in the series. The house servant Shinzaburo, although initially introduced as a handsome and polite retainer of the Isuzu household, is quickly shown to be subservient in character and highly emotional, bursting into tears at numerous points in the series. The father of the group’s tank loader Yukari Akiyama, the only other male worth noting, is significant in how he behaves in comparison to his wife. In his single appearance, he is shown to be overexcited, anxious, and comedically awkward. Yukari’s mother on the other hand is shown to be much more level-headed and is given a more driving personality than her husband. 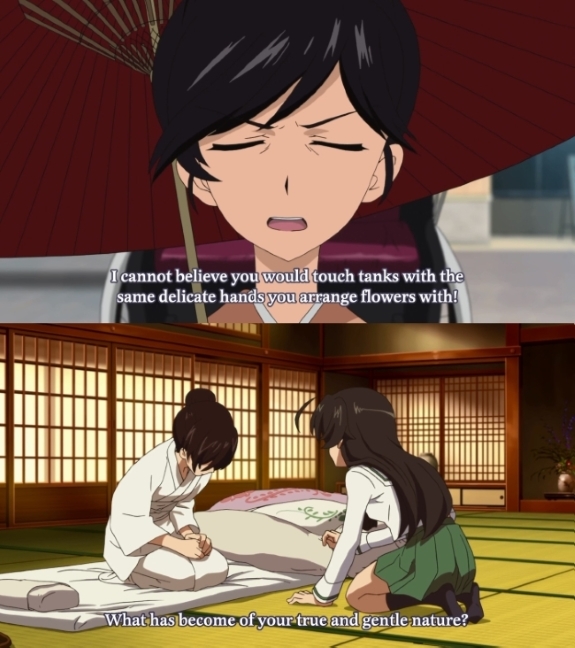 Although the rules of femininity are modified to accommodate senshadō, traditional norms still remain prevalent in this society. This is made evident in the subplot involving the group’s tank gunner Hana Isuzu and her mother. Near the beginning of the story, Hana acts against her family’s traditions by quitting flower arrangement to take up senshadō. Believing the sport is not suit a “delicate and gentle” woman, Hana’s mother disowns her and has her banished from their household. Later on in the story, she reveals that she had not given up flower arranging entirely, despite fully committing to senshadō, and goes as far as to arrange a piece inspired by the sport. Hana’s mother reconciles with her upon realizing that senshadō did not change her for the worse but instead makes her an even better artist.

Perhaps the intent of including this subplot was to explore the question of whether one can participate in supposedly unfeminine activities without also giving up her womanhood. The result of this dispute may imply that it is indeed so. Having a background in flower arranging did not result in Hana being any less effective in tank gunnery, nor did taking up senshadō cause her to become any less of a woman to her mother in the end. Questions of femininity aside, this subplot may have conveyed an even more valuable message for the viewer: What mattered the most was not Hana’s actual decision but rather the fact that she made the decision for herself, without any concern for societal expectations.

Not Just A Weapon

Phallic symbolism may also have a role in the deconstruction of gender in Garupan. The phallus, which is any object that resembles an erect penis, is notable in that it represents both tangible and psychological power that would otherwise be exclusive to men. As women do not possess male genitalia, the possession of a phallic object is sometimes necessary to demonstrate a degree of parity. Not unlike the magic wands used in the shōjo manga Sailor Moon, the tank guns depicted in the series can be interpreted as phallic representations of power. They are not only significant in a visual sense, but are also significant in their ability to put individuals on an equal footing. Whether the user behind the weapon is male or female, strong or weak, large or small, its capability does not diminish. Another interesting detail to note is how the tank operated by the protagonists is upgraded with larger guns throughout the story. At the beginning of the story, it is armed with a short-barreled howitzer. However, by the story’s conclusion, it is armed with a longer and more powerful anti-tank gun. A connection can be drawn between this progression of armament and the growth of the protagonists as great senshadō practitioners. As the team gains proficiency in their craft and continue to win battle after battle, their symbolic phallus grows larger in size. 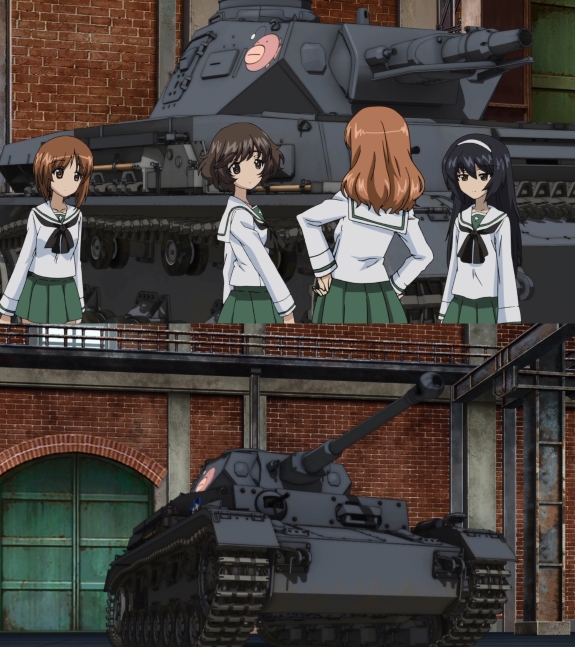 
One can justifiably dismiss the series as a product of male sexual and aggressive desire, with no purpose other than to indulge its audience with attractive young women and military hardware. When it comes to Japanese animation, the use of a largely female cast is by no means revolutionary, nor does it necessarily imply a feminist or egalitarian message. However, it is not entirely unreasonable to read Garupan from a more sociopolitical angle, and interpret the series as a satire on gender norms or as a playful expression of female empowerment. Moving forward, viewers might be led to ask questions on what even constitutes femininity, on where one would draw the line between masculine and feminine, and on ways power can be represented with respects to gender.

Taking historical events into consideration, using tanks to empower women might not be such an absurd premise in reality. In addition to serving as snipers, machine gunners, and anti-aircraft gunners, women of the Soviet Union also served in tank crews during the Second World War. Female tankers like Aleksandra Samusenko and Mariya Oktyabrskaya, who both died heroically in battle, demonstrated that giving up one’s womanhood is not necessary to “become hot and tough as steel, as robust and lovely as caterpillar tracks, and as passionate and accurate as a cannon.” In a similar fashion, the characters of Girls und Panzer were able to perform what was historically a man’s job and fight without giving up their own identities. 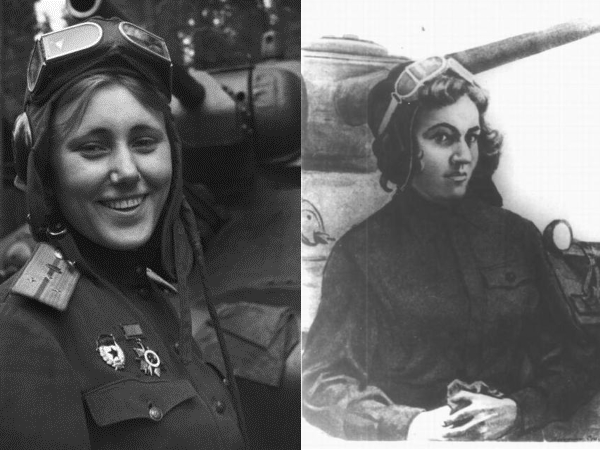