Madame Joker Volume 2 Review: a disappointing addition to the series 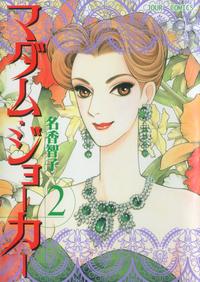 As Ranko’s boyfriend leaves her to marry another woman, she sets out to find a new partner. She walks the streets (accompanied of course) and goes to adult education lessons and attends various social gatherings. This is where she encounters various members of society from various different classes. Unfortunately due to her great wealth and beauty, instead of finding a boyfriend she only finds more people who are jealous of her. However these new foes don’t prevent her from getting to the bottom of various new social and class problems which those around her suffer from.

I couldn’t help but feel that there was something missing from this second volume. The story and new characters which were introduced were not as compelling as others in the previous volume. Whilst there was a greater emphasis on the lower classes and how the members of the upper class regard them, and there was a slight move away from the episodic nature of the first volume, overall the story lines were a bit weak. I felt that the way in which characters were shown to have a disliking of members of the lower class wasn’t subtle enough, through having characters going all out and exclaiming that only the social elite can have true artistic taste and that noble families shouldn’t be aloud to mix with those not of nobility. The natural atmosphere which had been captured so well in the previous volume was lost and as a result I was forced to doubt the idea that members of upper class Japanese society actually have these feelings and beliefs. 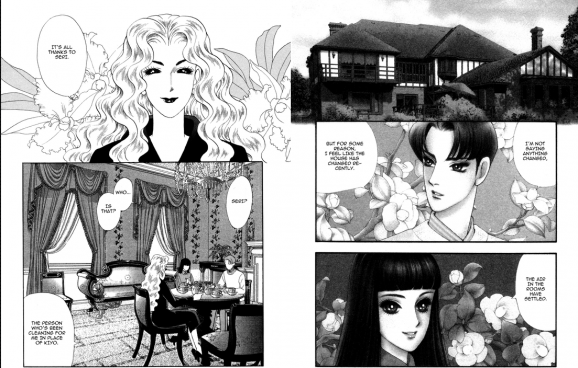 The first story suggested that the volume was going to be strong, whilst the new character Arashi Tojo was slightly archetypal, I found the ethical idea which was put forward – should parents have children so that they can use them to make money – interesting and I thought that through moving away from stories focusing solely on the upper class, Tomoko Naka would be able to open herself up to new story ideas. However as more characters were introduced in subsequent chapters I couldn’t help but find them much like the archetypal and stereotypical ones contained in your average mystery story, this was only worsened as the mangaka appeared to be using caricatures as character designs. Despite these flaws Ranko’s strong character still managed to shine, the message of gender equality was evident and through introducing female characters who own and manage businesses this message is only strengthened.

In terms of art work, at the beginning of the volume I felt that panels had been hastily drawn and were far from the detailed ones which I had grown to love in the previous volume, this was both due to the fact that panels containing characters were often left bare of a background or screen tone and because some panels depicting locations had been copied from those in the previous volume. However as soon as the first two chapters had ended I was greeted to a series of eye pleasing panels, and thankfully subsequent chapters contained both new location designs and new drawings of previous locations. Whilst – as I previously noted – some character designs appeared to be almost caricatures of stereotypes, I still found it impressive as to how Tomoko Naka manages to not recycle previous character designs and individually draw and design each ‘extra’ – no matter what their significance is to the story.

Whilst this second volume was not as strong as its predecessor had been, and material often felt rushed, it was still good. Whilst they were not as subtle as they had been before, the strong social commentaries were still there, and the new ethical debates, which were introduced were interesting. Although the artwork didn’t start out as strong as it had previously been it was still detailed and character’s expressions still gave a subtle impression as to what they might be feeling. Whilst the second volume may not be anything outstanding per say I would still recommend reading Madame Joker volume 1 for those who are looking for a manga about the upper classes, which is not set in a private school. Or for those looking for a great josei title.

Madame Joker is available on jmanga.com

Posted on Dec 30, 2012 by
WillStocks
I really enjoy animation, manga and games. As well as writing articles I write plays and draw frequently. Follow me @stocksatron
Follow