My Little Monster is an anime about a boy and a girl who struggle to understand the extent of each other’s love.

Midway through term Mizutani Shizuku, a diligent and hard working student who’s sole interest in life is to work and study, is asked by her teacher to deliver some handouts to Yoshida Haru, a boy who rarely attends school and suffers from frequent violent outbursts. After completing this errand however Shizuku is yet again asked a favour of her by her teacher – she is asked to get Haru to attend school regularly to prevent his expulsion. As a result of attempting to do so however, Shizuku finds herself being the target of Haru’s affection. As the two begin to spend an ever-increasing amount of time together Shizuku begins to find herself falling for Haru, but is her love the same as Haru’s.

Unlike the majority of romance and high school anime’s, My Little Monster’s characters are believable, relatable and compelling. The typical trope that the best time in life is during high school is thankfully neglected, this makes way for the isolation and heartbreak that teenagers truly feel. The character’s naturalistic personalities therefore make the reasoning to their actions and feelings much more believable. The show is particularly refreshing as Shizuku and Haru’s are made more realistic through the covering up of their true feelings through their outer personality (whilst Shizuku does this through being serious, Haru does it through hyperactivity and aggression). Whilst the anime is made less repetitive through not dillydallying when it comes to the couple embracing (as too many titles seem to do), there were occasional repetitive points when it comes to being open about how and in what way they love each other. Whilst the majority of episodes were strong, there was one episode (I won’t name which), which left me questioning its’ point, there are also the scenes in which a few words seems to have been panned out into many. Whilst this series is and has been advertised as a comedy (whilst there are certainly hilarious points in the series) I would prefer to think of My Little Monster as a drama, this is due to the fact that many of the jokes often fell flat, and it was drama rather than the comedy which kept me interested compelled and kept me watching the show. Character’s are also introduced naturalistically, whilst a catalogue of character’s is slowly building, their proposes and relevance to the series is logical, new characters aren’t introduced so increase the number of scenarios – rather they are there to keep the drama compelling. 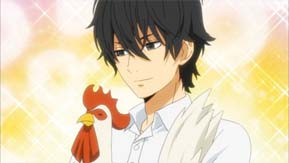 The animation and overall design of the title is highly commendable. It’s always refreshing to see a show that doesn’t use flat angles and chooses contains a wide variety of shots. Thankfully there is no fan service at all, therefore limiting the number of questionable moments between characters. Backgrounds are beautifully constructed and little bits like hair animation and the animation of the ‘extra’s’ show how much thought has gone into constructing this show. However there is the occasional slip up in the animation, sometimes this is seen when the camera pans across jollity and when characters walk with a slow frame rate.

The soundtrack added further drama and emotion to the series, and there are some particularly well composed tracks. Whilst the opening and ending themes are good they are not they were not good enough to make me want to constantly re-watch them, however the animation for the opening is quite breathtaking at points. I also found that the piano score which constantly re-occurs throughout episodes slowly annoying.

Overall the first episodes were thoroughly enjoyable. Barren of all typical anime and fan service tropes, having an excellent artistic style, fantastic animation and  great character development this series is shaping up to be a fantastic shojo title – with a hopefully future ahead of it. So if you are looking to watch something original this season, I would suggest giving this a try.

My Little Monster is available to stream now on Crunchyroll.

Posted on Nov 24, 2012 by
WillStocks
I really enjoy animation, manga and games. As well as writing articles I write plays and draw frequently. Follow me @stocksatron
Follow