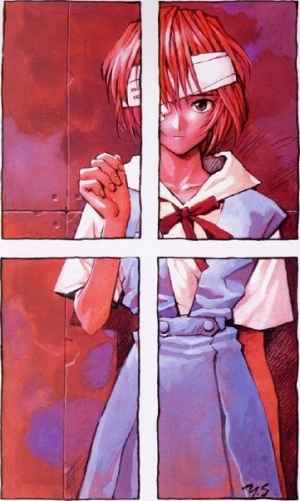 If Sgt.Pepper’s Lonely Hearts Club Band was the Big Bang of music in the 1960s, then Neon Genesis Evangelion was the equivalent of anime in 1990s. Eighteen years since its release and we are still trying to analyze every single aspect of the series (and Gainax is still making huge amount of money out of it with its Rebuild of Evangelion project). Even academic scholars have written articles about it, something unimaginable to non-anime viewers. Here, I want to focus on the popularity of one character and her influence in the anime industry: Rei Ayanami.

Rei is an anti-heroine, much like all the other characters in the series. She is a beautiful, mysterious fourteen-year-old who shows no emotions and acts more like a robot than a human being most of the time. She is very quiet makes only pithy remarks, if she speaks at all. The female characters in Evangelion are adorable in their own ways – the tardy but motherly Misato, the feisty but insecure Asuka – but it is Rei that changes the rules and revolutionizes the anime industry.

Warning: Spoiler ahead, as it’s impossible to discuss Evangelion without spoiling the content.

When referring to a ‘mysterious character’ in the pre-Evangelion era, it was usually about someone with a twisted and often tragic past that would be slowly revealed as the plot progressed. What is mysterious about Rei is that she has no past. We learn in episode five that all records of her past have been erased from the database of NERV, the organization that develops the giant mecha known as evangelions. This generates the sense of mysteriousness surrounding the character, and has become a major talking point as the series goes on.

Personality-wise, she is socially detached, talks to nobody, and carries a dull expression all the time. Unlike traditional female protagonists who are usually strong, caring and charismatic (like those we see in productions of Studio Ghibli), Rei is the complete opposite. It is a different kind of charisma that makes her popular. She gives fans plenty rooms of imagination on what she really thinks and feels. It also makes fans sit on the edge of their seats whenever she makes an appearance, since it is hard to predict what she will do. After all, who knows what she is thinking?

Then there is the famous “Ayanami Rei’s smile” scene at the end of episode six. We learn that it is not the case that she cannot feel emotions, but she just does not know how to express them. Facing a crying Shinji who is glad that she is alive after a big fight, she says, ‘I don’t know what to feel at times like this.’ Shinji replies, ‘with a smile’, and smile she does, after a minute of hesitation. The scene is so powerful and iconic because that is the first time she has deliberately shown an emotion, and one of the handful of times she has done so throughout the whole series.

Rei can be considered as the prototypical ‘mukuchi’ character, meaning ‘mouth-less’. It is a term used by anime fans to describe characters who do not speak unless necessary and show no emotions when speaking, and is considered to be a moe element. They have a monotone voice and speak to-the-point, avoiding unnecessary conversations. Rei has popularized this moe element, and we later see characters like Yuki Nagato from The Melancholy of Haruhi Sumuziya, Lain from Serial Experiments Lain, Eve from Black Cat, and Ai Emma from Hell Girl all fitting into this ‘mukuchi’ category. Mukuchi characters sell, and they are immensely popular among anime fans.

Sex sells. It is a very simple rule in business. Rei is a fourteen-year-old school girl with a pretty face and a well-developed body. Along with her mysteriousness, she is a character that can give viewers lots of rooms to fantasize about. Developers hence can create many Rei-related products for sale. Her image also printed on stationary, posters, shirts and various accessories. Figures of Rei and many characters (in swimsuits and/or suggestive postures) are manufactured in huge amounts. These products sell really well. Before Evangelion, anime merchandises were not considered a big market for producers to profit on. However, it changed when Evangelion came out. Rei expands the market, and Gainax capitalizes on that. 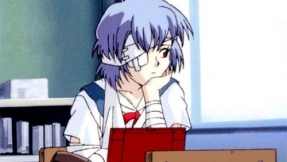 One thing that I think Rei popularizes is the bandage look. In the first episode she is seen being wrapped in bandages as she is badly injured, inducing a sense of sympathy in Shinji. It also creates an image of her needing protection from others, in a way inducing protectiveness mainly among male viewers, the target fan base of Rei. Gainax, for sure, will not let such a fat chance go. Author Kazuhisa Fujie wrote that “figures of Rei, in her bandaged beauty, sold like wild fire”, and that the bandaged Rei figure outsold all other merchandizes. The bandage look has now become almost a trademark image of her, and a common feature in cosplays.

All characters in Evangelion have encountered their own existential crisis during the series. They all struggle with reality and ask themselves what they are fighting for. Rei faces no such problem. In fact, she does not wonder why she is alive, but question why she does not die yet. An anti-climax for an anti-herione.

Throughout the series she has dropped hints of her indifference to living, and has engaged in drastic acts that could have cost her life. Unlike other characters, she does not care if she dies. In a way one can say she is very nihilistic, but viewers only understand why she embraces death by episode twenty-three. In that episode, Rei self-explodes her evangelion to defeat an angel. (Coincidentally, the background music being played at that scene is titled ‘Thanatos’, a Freudian term that refers to the death drive propelling humans to engage in life-threatening acts.) When she miraculously ‘survives’, it is explained that Rei is actually a human clone of Shinji’s mother, Yui Ikari (who ‘died’ when Shinji was young), made to activate Gendo’s Human Instrumentality Project. That’s why she does not care, as she could be easily replaced by a dummy if she dies. To a certain degree, she embraces death, as if dying is the only way to prove that she has lived.

If we boldly put this into context of 1990s Japan, known as the ‘Lost Decade’ after the economic bubble burst in the decade, it is not hard to see why Rei is so popular among Japanese teenagers, as they could relate to her: there were no goals for them to pursue, and they were severely damaged psychologically. Living or dying did not seem like a big concern when they thought they were living lifelessly anyway.

Being the clone of Ikari Yui explains and complicates Shinji’s affection towards Rei, which shows a degree of Oedipus complex in his case. In Freudian psychoanalysis, Oedipus complex refers to the young boy’s desire to have a sexual relation with his mother, and sees his father as a competitor for her affection. From the beginning, Shinji has a very strained relationship with Gendo, and if Rei is the clone of his mother, then Shinji fits perfectly into this Freudian case. In episode six, when Shinji wakes up he thinks he sees his mother by his side, but it turns out to be Rei, who is watching him.

The role of Rei then becomes ambiguous. She now not only is a friend and a potential love interest, but also a motherly figure that Shinji lacks when growing up. Much of this relates to Shinji’s tension with Gendo, who sends Shinji away after Yui’s death. During the Lost Decade many fathers were seldom home as they had to work or pretended to work (to avoid the shame of others knowing they were unemployed), and the mothers became the children’s support. In The End of Evangelion, Shinji explores his existential crisis with Rei, a scene that can be seen as a mother-to-son talk as Rei asks Shinji what he really wants. She is almost guiding him into making his decision on accepting the Human Instrumentality Project or not. Rei and Yui could now be seen as one.

Much like Radiohead’s Kid A, Evangelion and Rei have been discussed so thoroughly and obsessively by, well, everyone that it is hard to find something totally original to say. I can only try to, perhaps unjustly, narrow the reasons and impact of Rei’s popularity into the mentioned categories. Obviously, there is a lot more to say about them, but I’ll refrain myself from turning this into a 30-page essay.

Posted on Jul 11, 2013 by
Justin
Contributing writer for The Artifice.
Follow