Say ‘I Love You’ Episodes 1-5 review: an uninteresting opening to a new shojo anime 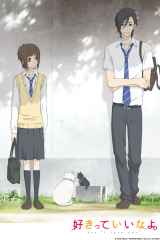 Mei Tachibana spent her high school life without making friends due to her childhood belief that all friends soon betray each other sooner or later. However when the most popular boy in school comes across her one day – Yamato Kurosawa – and begins to take an interest in her, the way in which she views those around her is dramatically changed forever. As Mei begins to branch out and befriend others she begins to emphasize and understand those around her, by helping others she begins to become a more confident and better person herself.

As I started watching this series I found it almost impossible not to compare it to the other currently airing shojo title, My Little Monster. At first the story lines appeared to be incredibly similar. They are similar both in the way in which the characters are set up and also through the reasoning behind why the female protagonists choose to isolate themselves from others. However as the second episode progressed the path split and Say ‘I love You’ began to take a much darker direction. Although again and again similarities between the two shows did begin to crop up, I felt that the difference in tone allowed me to stop comparing the two. I feel that the reason as to why the two shows are so similar may be due to the fact that the mangas which the animes were adapted from were both published in the same magazine (Dessert), suggesting that the magazine’s audience is particularly attracted to characters who are isolated or who have difficulties in making friends.

The story is quite generic in the respect that the plot revolves around the least popular girl and the most popular boy forming a relationship. The plot is not helped by the fact that Tachibana and Kurosawa are both archetypal characters either. Whilst Tachibana is your typical shy anime character who finds it difficult to express her feelings, Kurosawa is the popular polyamorist who just can’t help girls falling in love with him. Despite this there were some strengths in character’s personas, for example in an episode concerning a character describing how she lost weight so to get Kurosawa’s love, I couldn’t help myself from feeling moved. Unfortunately when supporting characters gain the spot light they are quickly dismissed and are never seen again, this put a greater focus on the leads which as I have stressed, are highly uninteresting. Plot points are similar to supporting characters in the way in which they appear and then are dismissed in later episodes. The story lines which the episodes contained, rather than making me feel that the couples relationship was strengthening made me question why Tachibana was going out with Kurosawa in the first place.

The art direction wasn’t particularly interesting. Characters were typically shojo in design and animation came across as cheap at times due to the lack of movement in places and the frequent flashbacks to previous episodes. If cats are your thing however, then you may enjoy the cute cats which Tachibana looks after in her spare time. However this is really the only plus side in terms of art and animation.

Overall this series hasn’t had a particularly interesting opening. With stereotypical protagonists and poor art design and animation nothing really caught my eye. It really needs to pick up and progress in the next few episodes to re-capture my interest therefore. If you are looking for an interesting shojo or romance title this season therefore I would thoroughly recommend that you do watch My Little Monster instead.

Say ‘I Love You’ is currently streaming on crunchyroll.com

Posted on Dec 5, 2012 by
WillStocks
I really enjoy animation, manga and games. As well as writing articles I write plays and draw frequently. Follow me @stocksatron
Follow

Violence in Anime: Helpful or a Hindrance?
What makes an anime/manga popular? How does it get into the mainstream?
Analyzing The Concept of Unforgiveness in Hell Girl
The role of fillers in anime: Is there a way around them?
What is in an anime opening?
Black, White, & Colour in Star Wars Visions
Portrayals of Gender in Studio Ghibli Films