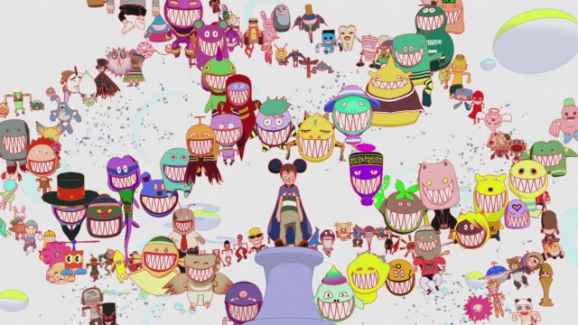 If anyone deserves the title of “The Next Hayao Miyazaki” it would have to be Mamoru Hosoda. He originally worked as an animator for Toei Animation (a studio responsible for a lot of pre-00’s favorites including Dragon Ball Z, One Piece and Sailor Moon), before moving onto Madhouse in 2005. Unknown to many, he was supposed to work on Howl’s Moving Castle in 2004 but left due to his ideas clashing with the Ghibli staff. Since his 2006 release of The Girl who Leapt through Time, he has been releasing a new feature film every couple of years, and has been rapidly climbing the pyramid of popular anime directors.

Summer Wars (2009) has been out for a decent number of years, but to those outside of Japan it only started finding its way into stores early 2011. Summer Wars marks Hosoda’s writing debut, and while his plot is interesting and entertaining, it is secretly in the remake comfort zone of film making. Comparisons between Summer Wars and the Digimon Movie are endless, but not without reason. Hosoda directed both films, and his influence seeps through enormously, to the point where the scripts are almost identical copies of each other. The engaging concept for Summer Wars is simply this: imagine if Facebook and Google were taken over by a virus? Except in Summer Wars, this evolved version of the Internet is called “Oz”. In Digimon, it is called the Digital World. While visually they look similar enough, the execution of the story – the ending in particular, is a clone of it’s preceder. It’s as though Hosoda wanted to make his Digimon story appeal to a wider audience. Well, it worked- more mature themes and characters.

Hosoda’s work is recognisable by the distinct modern and colorful art style, particularly the character designs by Yoshiyuki Sadamoto, who drew the characters for Neon Genesis Evangelion (1996). The smooth, fluid animation from The Girl who Leapt Through Time takes a step up in Summer Wars. The amount of detail in the backgrounds, and vibrant coloring, especially in the scenes inside Oz is remarkable. The fight scenes stand out for being high speed, versatile and fluid. However, much focus is given to facial expressions and body language of characters. No matter where you look on the screen, something will be moving somewhere. It is this attention to detail which makes this film believable and a wonder to look at.

There’s a huge cast of family members in this movie and all of them do something on screen, whether eating, drinking or watching the baseball. While this is a highlight in the animation department, it becomes overwhelming from a character standpoint. The insanely large number of characters, like in the popular series Mai HiME (2004), and Mai Otome (2005) afterwards, deems itself unnecessary. Lengthy introductions follow each one, but the only ones whom are given proper focus is our group of protagonists: Natsuki, Kenji, Grandmother Sakae and the mysterious Wabisuke. At least half of the mob could easily be cut out with no loss to the story. While this writing choice was a reflection of Hosoda’s equally large family, such sentimental thoughts do not often work well on film. Flaws aside, the characters are likable and enjoyable to watch – the film exploits the flaws of the four mentioned, making them all the more memorable.

The soundtrack by Akihiko Matsumoto is fitting, but nothing extraordinary. It gets progressively more powerful as the film progresses, and the intensity and urgency of the situation the characters find themselves in escalates. It couldn’t be described as bad, but it doesn’t strike as particularly unique either. Overall, it’s the careful compilation of thriller, action, science fiction, romance and drama; the brilliant animation and lovable characters that makes Summer Wars such an enjoyable, and highly recommendable film. It shows off what anime can do in terms of visuals, and inserts themes of family everyone can relate to. While it may not be perfect in terms of the recycled story and immense cast of characters, these aspects are easily overshadowed by the fast paced, energetic romp which is nothing short of entertaining. No matter who you are, if you have a taste for excitement, Summer Wars will fit, if not exceed, your expectations.

Posted on Jan 22, 2013 by
Jordan
I started writing about anime when I was 15 and it looked far worse than this. If you like my articles, check out my Goodreads to see what I'm reading.
Follow