Top 5 Titles from CLAMP: from Magic, Mayhem to AI’s 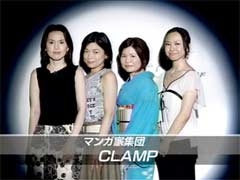 CLAMP is an all-female manga group, whom joined forces in the 1980’s. They started off writing doushinji (fan comics), but released their first original work called RG Veta in 1989. They are still releasing titles today, and have sold millions of copies. Over the years members of the group have come and gone (apparently they had 7 at one point!), but no matter what they will always have a band of loyal fans.

If you’re ever going to consider reading manga, CLAMP should be one of the first authors on your list. In all their titles, they suck you in with beautifully drawn characters, detailed costumes, fun stories – and most of all, they know how to properly set out the panels on the page and still make it eye pleasing (instead of trying to cram in too much)! Plenty of their characters and symbols have become almost iconic. It is no wonder almost every one of their manga have been adapted into anime! 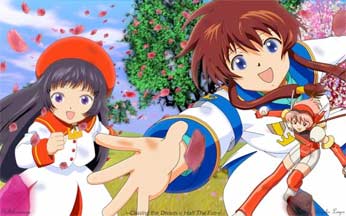 The manga for Angelic Layer is hard to come by, since their other titles are more popular. It spawned a measly 5 volumes from 1999. As concise as it is, I would like to highlight the 2001 anime by BONES here. Acclaimed as ‘the best of all CLAMP adaptions’, Angelic Layer is what all anime tournament shows should be like! It is about a young girl named Misaki who once moving to Tokyo is drawn into the craze of virtual-reality battle dolls called Angelic Layer. It has fluid fight scenes, vibrant colors, emotive music and a story which has more to offer than it first appears. If you can deal with a set up similar to Pokemon, just prettier (and a lot shorter!), then this is the show for you. You can see the opening credit sequence here. 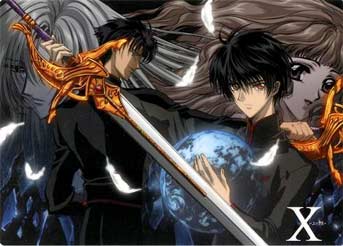 In a similar vein to Angelic Layer, I enjoyed the TV series more than the manga. The original manga came out in 1992, and spawned 18 volumes. In 2003 there were problems with publishing, since events in the manga were lining up with earthquakes in Japan at the time. In 2005, CLAMP tried to publish the last of the manga, and a volume 18.5 was released containing previously unseen content! A movie adaption came out in 1996, but has been criticized for cramming too much content into too short space of time.

X TV is a largely character based series, which explores the theme of destiny versus free will. The first third is very action orientated, while the majority of the show focuses on each of the many characters in the series. It is a dark action/fantasy story of a boy named Kamui who returns to Tokyo for the first time in 6 years, only to find he has more to achieve there than he first expected! You can see the opening credit sequence here. With great characters, a repetitive but epic soundtrack and steady pacing, X TV is a show worth watching for those who don’t mind a little grittiness here and there!

On an unrelated note, you may notice this is where LeLouch from Code Geass got the design for his cape from! 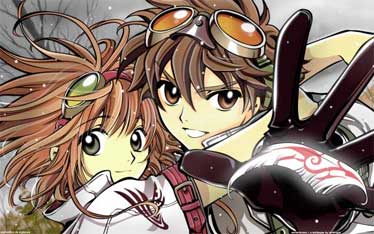 Tsubasa Chronicles, along with XxxHolic are two series that’s cast is a compilation of all CLAMPs previously invented characters. This has been greeted with either praise of genius, or disappointment. I would like to highlight the manga here. It overtook the likes of X with 28 volumes being released! It is a fantasy story about a boy named Syaoran whom goes on a quest to retrieve his childhood friend Sakura‘s memories that have been lost across time and space.

While half of the story is repetitive, it is an entertaining adventure story which gets darker the more it goes along. The plot twists that occur from volume 15 onwards will knock you off your chair (if you can understand them, that is)! The characters are lovable and well detailed, story intriguing (once it gets going) and the artwork is very nicely done, especially in fight scenes. The lines are quite thick, much like the style in Angelic Layer, but it is still eye catching. The later chapters blew my mind with how complicated and exciting it had become – prepare to get your thinking cap on!

If you would like to take a look at the anime (2005- 7), I would recommend watching the first episode, and the 5 part OVA series – but read the manga first! The music score for the anime (composed by Yuki Kajuira) is a must listen, no matter who you are! You can see the trailer for the series here. 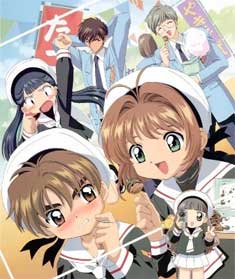 Cardcaptor Sakura is probably the most well known of CLAMP’s titles, since it originally aired on TV as the edited-beyond-recognition mess as Cardcaptors. It follows the story of young Sakura Kinomotto, whom’s destiny is changed forever, after she accidentally releases some magical cards from a book in her Dad’s library! The manga chapters were spread across 12 volumes, which were later adapted into the 70 episode anime by Madhouse. The writers increased the number of monsters/cards that need to be retrieved in order for the series to go on for longer. Two feature films followed it, the last one The Sealed Card was created to wrap up the series.

Both the manga and anime versions of Cardcaptor Sakura have been successful. It is a hugely entertaining franchise, with something for everyone. It combines comedy, drama, magic and romance into one! While it is repetitive it has unforgettable characters and an interesting story. The anime has a great soundtrack, although the animation quality (while mostly fluid) sometimes falters. You can fall in love with the opening sequence here. 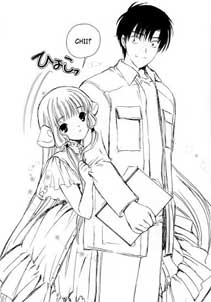 Chobits was one of the first titles CLAMP tried to aim at a male audience. It covers 8 volumes, and was adapted into a 26 episode anime in 2002. The anime changed the ending of the manga, and contained a lot of boring filler (not even fun filler!) – which is why I would like to recommend the manga over it. It is a romantic comedy series, about 19 year old Hideki, whom moves into the big city and finds a persocom in the trash. Overjoyed (because he’s broke), he brings her home, but finds she is no ordinary robot!

Chobits is set in the same universe as Angelic Layer, where technology has advanced well beyond Facebook into the realm of humanoid robots – and the question of Artificial Intelligences is brought to the table. It does a great job at portraying the problems that may occur if humanoid robots were to exist. It is an important work – it’s very possible we may have similar technology in the future! The artwork (especially Chii and her costumes) is gorgeous, the characters are memorable with their own fair share of backstory and the plot is very interesting. There are a few twists I didn’t see coming!

Addictive, but touching, funny and cute all at once, I would highly recommend the Chobits manga to anyone, even if you are skeptical about manga.

Posted on Nov 21, 2012 by
Jordan
I started writing about anime when I was 15 and it looked far worse than this. If you like my articles, check out my Goodreads to see what I'm reading.
Follow