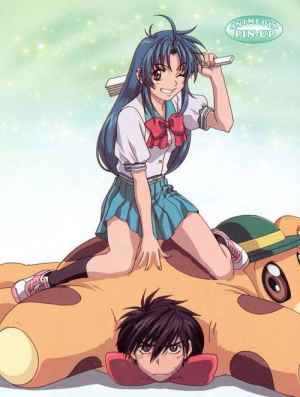 Anime that focuses on comedy alone has often got the short end of the staff in terms of praise because of the lack of story and/or direction. Commercial hits like Azumanga Daioh (2002) and Lucky Star (2007) both run on a “skit” format which gives the episodes a ‘hit or miss’ quality. Another comedy competitor, School Rumble (2004) has a simple story thanks to its love triangles, but is very episodic at the same time. These titles not only suffer from a lack of story, but inconsistent, often simplistic artwork and choppy, still-shot galore animation.

Just when it seems like anime comedy alone will never “wow” us like Matt Groening’s work of genius The Simpsons (1989) and Futurama (1999) have, one stumbles upon Full Metal Panic? Fumoffu, a 12 episode Kyoto Animation series from 2003. Granted, it is not entirely comedy, trickles of romance and action are thrown in too – but it most closely matches the style of the US animation comedies we know today (Adventure Time being a more recent one). The episodes are either divided into two 10 minute episodes, or one story that covers the full 20 minutes running time.

The Full Metal Panic! franchise is based off a series of light novels by Shouji Gatou. It is unclear where the title came from as it is about a high-achieving, high school student, Kaname Chidori, who is put under close surveillance by 17 year old Seargant Sousuke Sagara in order to protect her from kidnappers, for reasons neither of them know… yet. It is a show of many faces, so when GONZO originally produced the 2002 series, a lot of the comedic moments were left out to help move the story along. This series basically takes all the left over giggle-factor and smushes it into one show.

If you ever want to start getting into the animated franchise, Fumoffu is the best way to introduce yourself to the characters and be greatly entertained at the same time. It combines nearly everything fans seek from anime comedy, or anime in general. Kyoto Animation start off their career with a bang (pun intended), taking a gigantic leap forward over their competitors. The character artwork is more clear cut then GONZO’s 2002 production, with vibrant colors, fluid, movement-packed, extravagant animation. The attention to detail in facial expressions, where their mouths do more than just open and close vapidly is amusing to see. The characters’ outfits change, so it is a lot more true to real life. There are a few episodes where the amount of stills increases, and these episodes are not on this list. The characters’ personality flaws are exploited to the point where you can’t help but to love them. The contrasting personalities of Sousuke and pretty much everyone else, but especially the fiery Kaname add to the amusement factor. Let’s not forget the fantastically catchy and touching opening song by Mikuni Shimokawa, which features one of the most visually impressive opening credit sequences for the genre. The background soundtrack is subdued, but works well in emotive scenes.

Perhaps it is because Fumoffu was based off Shouji Gatou’s beautiful characters that the show basically wrote itself and spewed out some great writing. Even though the show is episodic, every situation, problem and solution the characters find themselves in is creative and clever. Who would have thought retrieving a piece of homework would turn into an epic scale adventure – and this beach episode sets itself apart from all the others. Even if the show fails to make you laugh, it will warm your heart with the sprinkles of romance and shoot your adrenaline flying with explosions. Sadly, even at 12 episodes, Fumoffu has its fair share of subpar episodes, where both its aesthetics and writing sink to average. For the greatest time possible, here are the top episodes you should try and track down if you are to watch the show. I hope it gives you a giggle or two!

5. The Man from the South / A Hostage with no Compromises

Episode 1 gives a good introduction to the cast of characters that newcomers to the franchise may not be so familiar with. The animation is not Kyoto Animation’s best but it is above average, and the main conflict of the story is resolved in a smart way. Who would have thought Sousuke had brains after all? Because the episode deals with kidnapping, and kidnappings were a big problem in Japan at the time (August 26 ’03) this episode was not aired.

The final episode wraps up the series appropriately with a great deal of havoc and craziness. A classmate opens a container of Sousuke’s, which contains a mysterious hazardous substance! In order to try and stop the effects from spreading to the entire school, Sousuke locks everyone inside until further information can be retrieved. Insanity comparable to William Golding’s Lord of the Flies follows, with beautiful animation and some strange but fitting music.

3. Hostility Passing by/ A Fruitless Lunchtime

An average day at school is not made not so average with the forgetful, over-reacting Sousuke. His antics are brought to full attention with an inability to order himself lunch, and a crazy Kaname sending him home to retrieve her homework. The hyper, fluid animation of Kyoto Animation is in full swing here, and there are a few cute, touching moments as well.

Possibly one of the best anime beach episodes known to man, this episode is part fan-service, part weirdness and part violence. Everything we love about anime is here: pretty girls, great animation, an interesting set up and most of all brief but effective fight scenes. How can one go wrong? With Sousuke in the middle of it, that’s how.

The two winners of the pile are episodes 8 and 9. It was a challenge to decide if they should remain separate or combined. Since they are technically just one big episode, I kept them as one unit. The Captain of the Mithril submarine, Miss Testarossa, has decided to try and live a normal life for a change – so she comes to Jindai High. Sousuke is supposed to guard her, and Kaname at the same time. The result is a big mess. It is 80% situational comedy (which gives all Full Metal Panic! shippers an opportunity to wave their flag), 10% hilarity and 10% awkward. The animation is Kyoto Ani at their peak – so much happens on screen it is hard to look away (and why would you want to, with the fan-service?). Great fun, if you had to sum up the show that is Fumoffu these are the episodes to show.

Posted on Apr 6, 2013 by
Jordan
I started writing about anime when I was 15 and it looked far worse than this. If you like my articles, check out my Goodreads to see what I'm reading.
Follow