Are you curious as to what anime is currently airing in Japan at this very moment? Well fret no more I am here to help you make that decision by giving you a quick glance into the Japanese Air waves. This may seem intimidating to newcomers but I highly recommend simulcasts, as this helps all passionate anime fans alike on a whole different level. With simulcasts now growing more rampant, finding the right provider proves all the more easier to delve in to the world of current anime.

Let’s have a look at some of this fall season’s new “romantic comedies”.

My Little Monster is the story of discovery, emotions, and, bonds. Mizutani Shizuku is a girl whose only interest lie on her studies almost seeming apathetic to the rest of her surroundings. One day that all changes when she meets the frank and abrasive, Yoshida Haru, a student who has refused to attend class due to his inability to restrain himself though completely honest and innocent is often misunderstood. Watch this series if you would like to see how these 2 polar opposites attract and journey through understanding everyone around them and each other.

Say “I Love You” is about meek Tachibana Mei, an isolated high school girl who goes on about her life until a chance encounter with, Kurosawa Yamato, the most popular boy at the school through some irregular circumstances but he still happens to take a liking to her. This anime is very straight-forward and refuses to censor itself in its brash behavior. Would you be able to take it all in? Then go ahead and give it a go though seemingly unoriginal it can be quite entertaining.

The Pet Girl of Sakurasou

The Pet Girl of Sakurasou is about Sorata Kanda, a high school sophomore who currently resides in Sakurasou, the dorm of the problem children at the academy. The only crime perpetrated to land him in that dorm is wanting to adopt a cat out of the goodness of his heart but unfortunately the regular dorms do not allow pets. He one day plans to leave Sakurasou to disassociate himself from the quirky residents with whom he resides with. One day he meets and befriends, Mashiro Shiina, a cute and innocent girl who just so happens to be a world famous artist. Though a world famous artist she unable to take care of herself on a regular day to day basis, and Sorata ends up having to be her “owner” and care taker to guide her through day to day life. How does Sorata protect her innocence? Tune in and check out this fall title.

Need more explosions and magic? Here are some of fall’s new “action” titles.

BTOOOM! with 3 million copies sold worldwide, this competitive game only includes bombs (BIMs) and radar. With 8 specific types of bombs, the strategy varies and creates more depth to the battle. But this all becomes too real when, Sakamoto Ryota, one of Japan’s top players is placed on an island to play the game for real alongside many other mysterious strangers with varying perspectives of playing the game. No longer able to hide behind the virtual world, the real consequence of death affects everyone’s sense of morality and ethics. Would you play a dangerous game like this in real life? Watch this to see what kind of struggles you may encounter.

Blast of Tempest is the story of magic the follows logic, but as events start unfolding and things start becoming illogical, the world is slowly turned into chaos, the only one who can stop it, Hazake Kusaribe, is trapped on an island to prevent her from interfering with the grander scheme. With very little at her disposal she manages to enlist the help of Mahiro Fuwa, a reckless young adult bent on revenge for the murder of, Aika Mahiro, his beloved sister. As his journey begins he is accompanied by his best friend, Yoshino Takigawa, who also happens to have secretly been Aika Mahiro’s lover. For a magical adventure of mystery, secrets, and heroism, be sure to check this anime after the jump.

Ixion Saga DT has our hero, Hokaze Kon, sent to another world known as “Mira”. In this world he meets with, Ecarlate, a princess of St. Piria on her way to marry a prince of a neighboring country accompanied by her guardians, Sainglain, A veteran swordman, and Mariandale, a transgender maid who dual wields pistols. Together they venture to help get the princess her destination and help Kon get back to his home world. Have you ever wonder about alternate dimensions and snicker at sexual innuendos? Then you may want to try this dimension transfer for yourself.

Here are some series making a triumphant return into the Japanese air saves.

Hiiro No Kakera is the tale of bloodlines/lineage being passed down from generations and the duties involved. Tamaki Kasuga one day visits her grandmother but to her dismay encounter strange creatures that can only be seen by her and other gifted individuals. She is then rescued by Takuma Onizaku, a guardian to the Kasuga family household. She later discovers from her grandmother she is to inherit the title of “Tamayorihime” after her grandmother, and is to protect ancient seals across the land. She also meets other household guardians, Mahiro Atori, Yuuichi Komura, Shinji Inukai, & Suguru Oomi as together they must face a new foe that threatens to break the seals. If strange occurrences and supernatural battles are your thing, be sure to give this series a try.

Hayate No Gotoku! Can’t Take My Eyes Off You 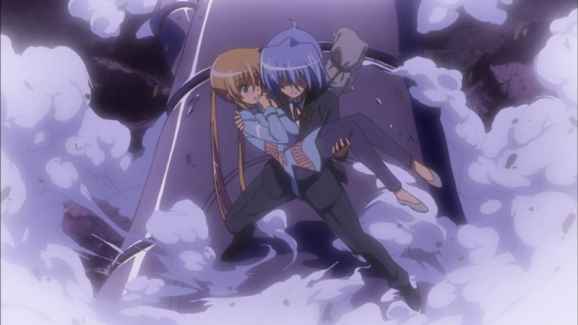 Hayate No Gotoku! Can’t Take My Eyes Off You is a popular series making its long awaited return. Hayate Ayasaki in once again protecting and serving Nagi Sanzenin as her butler. Not much more to this story as the series tends to randomize all just to entertain and breaks from reality more often than none. If you have ever felt unlucky in life and ever wonder how weird things can really get, give this anime a go.

Gintama is returning for its sixth season, join these super sleuth-like handymen during the era of samurai and aliens in the longest currently running gag anime. This show has no solid plot or story but makes for great variety and can pass the time trough its quirkiness and charm. If you would like a show that can be picked up from anywhere with a minimal need to start from the beginning, this show is a must and see why this show stands the test of time.

Sword Art Online is the story of the realistic struggles of Kirigaya Kazuto, a boy is entrapped in a a Virtual Reality Massive Multiplayer Online Role-Playing Game (VRMMORPG) called Sword Art Online alongside ten thousand players. Here he meets many individuals including Asuna, a female player with whom he becomes romantically involved with. All players are trapped within the game unless they can clear all one hundred floors, and anyone who dies within the game will perish in real life. If you like gaming and anime this is a must watch and see why this may just be the best anime of this year.

These are only some of the current anime to choose from, question is where are you going to start? Leave a comment below.