Ballad of a Shinigami Review: Your Time has Come

Ballad of a Shinigami – しにがみのバラッド

Opening Theme: “no one” by KOY 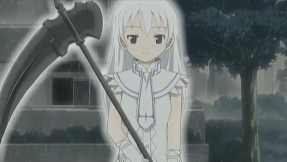 me, adapted from a 10 volume light novel series, revolves around a Shinigami (God of Death) with the appearance of a young girl named Momo. Unsurprisingly this anime is about death.

Unlike other Shinigami who are usually dressed in dark clothing, Momo is dressed in white including her hair. She is accompanied by a winged talking cat, Daniel. The only ‘abnormality’ about her appearance is the scythe she carries. Like a normal Shinigami she is responsible for bringing the deceased to their resting place.

Every episode tells a standalone story with different characters. They all relate to death but deal with it in different ways. Whilst Momo and Daniel are the protagonists of the series, they are more in the background supporting the main characters of each story. Momo is only supposed to move the dead on, yet she always meddles in what she shouldn’t, making her a unique Shinigami.

Death is all around you; it’s a fact of life. I felt this anime dealt with the subject in an interesting way compared with other anime and because of that I took an interest in it. It took a light approach to a serious topic widely covered in many other anime. Many will choose an overly serious way of dealing with it like Death Note, or go down the emotional tearjerker route like Grave of the Fireflies this did neither and kept a casual approach. It doesn’t try to overwhelm you with emotion, it wants to make you think about your life and I love anime with morals. I also liked how it integrated the fantasy element of a Shinigami nicely into a real life setting without falling prey to a typical fantasy battle anime like the most obvious one, Bleach.

Whilst I’ve said that this show is aimed at teens and older teens, I think they tried to appeal to a younger audience as well. For one the protagonist, Momo, was quite moe, not something you expect from a Shinigami. None of the stories were particularly ‘dark’ and due to the lack of episodes none were really ‘deep’ either, seemed like they wanted to keep it as light as possible. The slight details may indeed appeal to a younger audience.

Still I would say this anime isn’t for them, not because of the connotations of death, but because of the emotional side of the stories that they wouldn’t be able to relate to. I think it’d be difficult for someone without much life experience to understand the hardships that some characters go through and sympathise or relate with the situations. It’s very unlikely they’ll have experienced anything similar and are probably too young to understand. They’re more likely to become bored even with children friendly elements like Momo.

Not to say they wouldn’t understand anything. I was a young teenager when I watched it and I had no experience of anything. Nevertheless I found myself drawn into each story and the feelings came across to me. It probably is more suited to older teens, early twenties and hitting the seinen and josei demographic.

As said before, every episode is a standalone story with each dealing with death differently. Because of the drawback of it being only 6 episodes, it was difficult to feel anything for the characters or get into a story. In that way none of the stories were really compelling. On the other hand I think the stories were good for the time it had and I believe you’ll realise that the stories makes this anime great, nothing else. It’s the various circumstances of the characters that you may have a connection to, not the characters. I found the stories portrayed well and even heart-warming.

Here’s a quick mention on the light novels. I personally didn’t think the author K-Ske Hasegawa was good at setting a mood. It could be due to the translation but whatever the case the books didn’t create enough atmosphere. The anime picks up on that and was able to emphasis the mood when needed. Most of the emotions here I’ll admit involved tears, though not always sad tears, happy tears too.

I think this is the type of anime that would easily slip under your nose and you’d have no idea it existed. I don’t think it’s deserved. I understand that some may be turned away by the slow pace and perhaps somewhat predictable endings. But I feel that having 6 separate stories compliments this part as you can flip to the next story if you didn’t like one without losing anything. Albeit not the best of advantages. The unfortunate outcome would be if you didn’t like the first story and turned away instantly, perhaps you wouldn’t like the rest anyway but that isn’t for certain. If you liked the first episode you should like the rest.

The opening theme sets up the atmosphere and was a nice little song. Stood out enough to me to be on my itunes list for a relaxing listen. The lyrics were a little odd, though that may have been part of the appeal, I thought it was almost charming.

I didn’t remember the ED song until I listened to it again for the first time in years, and it still doesn’t ring a bell. Looking at it with a fresh view, it’s not bad. It lifts the mood at the end, but there’s nothing more I can say. It’s an okay song but pretty standard, nothing stands out.

BGM wise, again it was standard, it did its job of setting the atmosphere, little else. 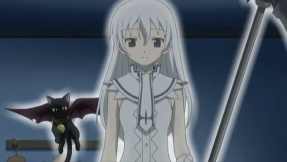 It’s an oldish anime released in 2006 and the animation back then isn’t as good as now so it’s difficult to comment on. However it definitely wasn’t bad for its time. The animation studio that worked on the series was Group TAC who also worked on another one of my favourite short anime series ‘Looking up at the Half Moon‘. But neither were anything special, if anything I remember the animation being bland.

Due to every episode having a fresh cast it was difficult to feel connected with any of the characters. Though I did take a liking to some characters and felt sympathy for others. If you can relate to them somehow, rather than feeling general sadness, it helps a lot. 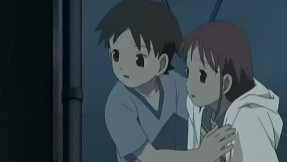 The series did well with the 20 minutes it had, I felt they brought out everything possible with the characters to the extent that you should have felt something for them. Perhaps some felt more, some less, but the fact that I still remember this series after watching it so many years ago is proof that I felt something.

Momo didn’t help matters, only her and Daniel returned every episode but were unfortunately in the background. I got that she was a kind Shinigami who wanted to help. But her main role was supporting the ‘main’ characters of each story rather than developing herself. She was still a likeable character, but for me she was nothing more than a reminder that death is always looming over you waiting for its time. And as much as I like talking flying furry animals, Daniel was useless, his only purpose seemed to be companionship for Momo.

Everything apart from the story was pretty standard but the story wasn’t affected much and that holds this series together. With what was probably a low-budget production I don’t think you can expect much more. I found some emotions felt here to be almost comparable to watching a Key series. At some points the stories were a bit of a drag, but for me those were few and far between. This is one of the few anime I watched solely because I loved the story, so much so that I bought the light novels. Only volumes 1 and 2 are released, none of the others are translated.

I’ve tried not to spoil anything by taking a generalist approach to reviewing this. I felt that reviewing each story individually would’ve been too long for one review, but perhaps being general wasn’t the fairest way to review this series. However I think I managed to get my main points across.

I recommend this for those who wants a good story and don’t care much for art or music. The 6 episodes are well written stories on a topic that’s slightly overused but puts its own unique twist on it. Because it’s only 6 episodes it’s quick to watch, so if you can spare a Sunday afternoon or Saturday night with nothing to do, it’ll be a good light watch especially if you’re not after anything too complex or deep.

Death itself is a pretty easy topic to get into no matter who you are or where you’re from and I think that plays in the anime’s favour. Also the unique take it has on the Shinigami and death itself can draw you in if you let it. Perhaps by the end of it you’ll think about your life a little differently such as how you feel about the memories you hold dear. I changed a bit, although I’m particularly susceptible to stories about death. Most of them do tend to make me rethink my life a little as something similar to that changed my life in university.

Posted on Jan 6, 2014 by
Lucretia Arkwright
Hi everyone, I'm 22 and got a fair bit of free time for now so I use it all to do what I enjoy and that's writing. Mainly blogging, and time I have left goes into anime.
Edited by Jordan, Misagh, Kevin Licht.
Follow