Captain America #1 Review: A new Cap for a new era 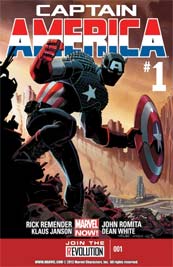 Ed Brubaker has left Captain America. He picked up the book in January 2005 and ran with it for a long successful period. He has now left Steve Rogers and the book has a new author, Rick Remender. Rick has received accolades for his great work on Venom, Secret Avengers and Uncanny X-Force series and appears to be moving slowly through the Marvel ranks. His work does involve heavy characterisation and relationship storylines, as in Uncanny X-Force, or fantasy based tales as in Secret Avengers and Venom. Joining him is John Romita Jr who has a long storied bibliography. He has a unique way of drawing heroes; they are quite square jawed with large rectangular eyes. Heroes appear more on the cartoonish side of the comic world. His work was fantastic on World War Hulk and Eternals but his recent pencilling has not made such an impact. They are a worthy two to take on Captain America’s mantle.

This book certainly has a new tone as the melancholic older Rogers has been replaced by an optimistic younger Steve. There is an excellent panel showing this attitude change with Rogers attempting a sexual innuendo with Sharon Carter and failing miserably. He appears to be happier and more engaging with modern times, though he has been here a number of years. The comic starts off with a flashback sequence from Cap’s childhood, which highlights his relationship with his mother, and it’s a poignant scene. The pencilling is strong and the aggression displayed is very believable and a little scary. The action sequences of the book are imaginative and a little far-fetched but the art is fluid and impactful making them quite enjoyable. The characters are drawn inconsistently in their uniforms and the poses somewhat odd as there are some uncomfortable looking characters. As expected with Remender the book enters the realm of fantasy and I think this suits Romita’s style. The alien looking creatures and odd facial features allow freedom to draw instead of the constraints of human form.

Captain America has been a very stiff character for a long period of time. The all American boy scout can appear quite dull and work orientated, with the weight of the world on his shoulders. It is understandable for an important world war veteran to take the pressure on in modern times as a hero, especially when he does not fit in. Steve Rogers needs to adapt his personality and skill set to manage with a new writer and in new environments, namely Dimension Z! I am interested to see how Remender takes him forward especially into the fantastical realm, as this is really out of Cap’s comfort zone. This is further cemented with the twist at the end of the issue and it is a shame that Cap was removed from a human environment so quickly. With some regular cast members and a return of enemies of old, the book sets out a new direction and one I am looking forward to reading.

“Because, and you listen close, Steven…you always stand up”

Posted on Nov 24, 2012 by
KulbirMann
Long time comic lover, full time surgeon, aspiring writer. Always happy to be criticised and reply with a vengeance! Feel free to contact me or leave comments.
Follow