Evangelion 3-in-1 Edition Volume 1 Review: How well does Viz’s edition of the manga stand up? 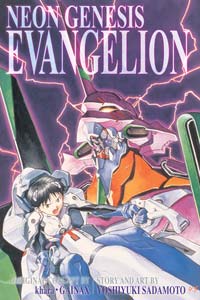 In the year 2000 over half of the world’s population was wiped out by a disaster known as the second impact. The impact is widely believed to have been caused by a meteorite, and its effects are catastrophic. The population’s struggles are only worsened by great economic stress and the nuclear wars which countries begin to wage against each other. Despite this however the Seele organization manage to achieve a number of scientific feats following the second impact, including: the construction of the giant humanoids the evangelions and the building of the new city Tokyo 3.

Fifteen years after the second impact the fate of mankind tilts on the coming of the third impact. 14 year old Shinji Ikari is summoned to Tokyo 3 by his father to pilot Evanglelion Unit 01 on the eve of an angel attack. Before Shinji didn’t care about anyone, but with the fate of the human population on his shoulders he must learn the importance of protecting and helping others.

Despite having only seen the two recent Rebuilding of Evangelion movies I still really enjoyed this book. Any copies of the original anime that I have found online have always been put at a ridiculous price point so this reproduction of the manga (which was based upon the series) was a godsend for me. Rather than watching the two recent movies I would recommend reading this edition first to understand the phenomena as a lot of the concepts and plot points are rushed in the movies and sequentially the manga makes a lot more sense. If you have seen the original series, (from what I’ve heard) the ending of the manga is different to that of the anime and in terms of plot there is a lot more detail contained within each volume. 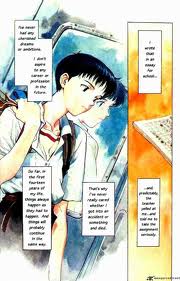 Whilst on the surface, the franchise just appears to be a simple mecha anime, Evangelion is far more than that. The plot is deep and complex and holds strong messages for today’s world. Whilst some of its’ messages – such as the religious ones are – a bit controversial, those related to how we should treat people as human beings not as machines and those which explore Freudian theories are incredibly interesting. Shinji and Rei are two of the most compelling (and depressing) characters I have ever found in manga and anime. Their struggle to show and empathize with human emotions is incredibly interesting and both of the characters backgrounds are just as captivating. Yoshiyuki Sadamoto’s comment, saying that he wonders whether it is that Rei cannot feel emotion or that she simply does not hold the ability to express it further shows how deeply complex her character is. Whilst it is questionable whether fourteen year olds would have such thoughts and would consider their lives completely worthless, their feelings demonstrate how mentality can be greatly influenced and matured by both upbringing and life threatening situations.

Yoshiyuki Sadamoto’s artwork really captures the feel of the anime and the panels containing the Evas are the most impressive in the omnibus. All of the characters’ emotions incredibly displayed, Rei’s gazing stare and her blank expressions really prompted me to question what could be going on in her mind. Whilst some panels feel rushed, action sequences are dynamic and flow well. However the level of detail in backgrounds is inconsistent and there is an incredibly questionable scene (which was in the anime) in which Rei lies naked on the floor with Shinji on top of her, (which I’ll never understand the importance or relevance of).

Viz’s edition itself is impressive. Included are twelve coloured pages, accounts written by the voice actors who played Rei and Shinji, an interview with Yoshiyuki Sadamoto, plus an incredibly funny and bizarre four panel gag strip. The interviews and accounts both give a further insight into the minds of pilots and an impression as to what the mentalities and work styles of Sadamoto and Hideako Anno are like, I can only hope that the next omnibus will contain an interview with Hideako Anno himself.

If you’re a newcomer to the franchise or if you’ve only seen the movies then I couldn’t recommend picking up the first omnibus any more. The story and characters are compelling and the themes contained in the plot and the art style is just as noteworthy.

Posted on Jan 7, 2013 by
WillStocks
I really enjoy animation, manga and games. As well as writing articles I write plays and draw frequently. Follow me @stocksatron
Follow