What Lost at Sea can Teach us About Anxiety and Depression

Bryan Lee O’Malley is probably best known for his Scott Pilgrim series, in which 23 year old Scott Pilgrim must battle robots, ninjas, and more in order to defeat Ramona Flowers’ seven evil ex-boyfriends and win her heart. It can be serious on occasion, but most of the time the series is off-the-wall, crazy, and full of upbeat humor, video game logic, and pop culture references.

Lost at Sea could not be more different.

Lost at Sea is a graphic novel which O’Malley published before Scott Pilgrim. The story follows Raleigh, an incredibly shy 18 year old who somehow ends up on a cross-country road trip with three of her classmates, none of whom she has ever talked to. This includes Ian, a cultured teen prone to bursts of anger; Dave, a laid-back smoker still recovering from a painful breakup; and Stephanie, a kind and extremely hyperactive delinquent. Raleigh is the outsider of the group, the others have known one another for years and had planned the road trip together.

Raleigh barely talks, and it quickly becomes clear that she feels that she is worthless and quite literally soulless. As the trip goes on, she becomes friends with the other people in the car, gradually opens up to them, and learns to accept herself. On the surface, the novel is a story about Raleigh forming new friendships, trying to move on from her own previous romantic relationship, and general adolescent confusion. Although moving in its own right, the story can also serve as a look at both what living with anxiety and depression is like, as well what one can do to support someone dealing with them.

Trapped in her Own Head

The novel itself somewhat unique, in the fact that many pages include no dialogue with the other three characters, and instead take place entirely inside Raleigh’s head. Pages are filled with paragraphs of rambling text covering the panels, which detail her innermost thoughts and feelings. Given how little she initially talks to the others, it is largely through these inner monologues that the reader comes to know Raleigh (spoilers for the novel follow).

The reader’s introduction to Raleigh comes in the form of one of these thoughts, as Raleigh opens the comic by saying that she has no soul. This sets the tone for the rest of the novel. Raleigh’s inner monologue for most of the novel is heavily juxtaposed with her outer state. On the surface she is usually straight-faced and very occasionally smiling. But internally she is almost entirely negative, reminiscing about how cold and useless her high-school friends are, or how she despises her appearance, or how she feels like a horrible burden to everyone around her. Depression and anxiety often aren’t things that are visible from the outside, and this is exemplified in Lost at Sea. Even Dave and Ian never seem to notice how much pain Raleigh is in. In the end, Stephanie is the only person Raleigh truly confides in. 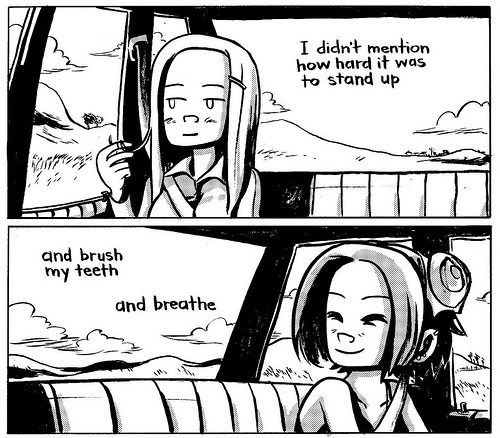 Easily the most touching part of Lost at Sea is the way in which Stephanie cares for Raleigh, and how close the two grow throughout the book. Despite the fact that they’ve only known one another for a few days and in terms of personality are polar opposites, Stephanie treats Raleigh like a human being (more so than any character depicted in Raleigh’s flashbacks), and takes everything Raleigh tells her completely seriously. When Raleigh describes how she has a ‘problem’ where she sees cats everywhere, Stephanie doesn’t laugh at her or even question whether the cats are real, she takes it in stride, agreeing to tell Raleigh if she sees any cats, so that Raleigh will know she’s not crazy. Cats can be seen as a metaphor for mental illness in the story: Raleigh feels that she is the only one who can see them, in effect that no one notices that anything is wrong with her; and she becomes closer to Stephanie when Stephanie confirms that she can see them too. Later on, when Raleigh is sitting on a hill and surrounded by cats, Stephanie is the only one there who notices, and shoos them away. 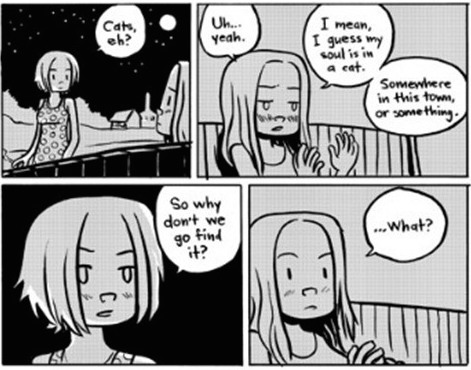 This assertion of cats is supported by Raleigh’s oft-repeated belief that a cat stole her soul, or in other words that her mental illness has stolen her life from her. It is left for the reader to decide whether a cat literally stole Raleigh’s soul or whether she is deluded or speaking metaphorically, but in the grand scheme of the novel it doesn’t matter; the focus is instead placed on how her new friends react to this. Stephanie immediately suggests that if a cat stole her soul, they should go and look for it, and proceeds to wake up Dave and Ian to search the town for Raleigh’s soul. During the following sequence, Raleigh appears to be having fun and connecting with the others, and their acceptance of her situation brings her closer to them. This acceptance both by oneself and others is a major theme in Lost at Sea, as well as being a good way to deal with or help others with depression.

In Limbo and Lost at Sea

The climax of the novel is heartbreaking, as Raleigh unexpectedly completely breaks down in front of Stephanie while they’re taking a break from chasing cats. She explains how she thinks maybe she really has had a soul throughout their trip, she feels like she’s crashed their trip and messed up all their lives with her pointless problems, and that she feels that she is effectively dead to the world. Stephanie deals with it awkwardly, but calls Raleigh the coolest person she knows, saying “Anyway, I know you’re all fucked up or whatever, but so am I, okay? So’s everyone. Or everyone I know, anyway.” She finishes by telling Raleigh that she know’s Raleigh’s going through a lot, and that if she was in her place she never would have been able to handle it and would have given up years ago. Their conversation ends with Stephanie murmuring words of encouragement before silently embracing a sobbing Raleigh. No matter how unsure of herself she is, Stephanie does everything possible to support Raleigh: She acknowledges how hard Raleigh’s situation is and makes it clear that she’s not alone and has people there for her, even if no one can understand what she’s going through. 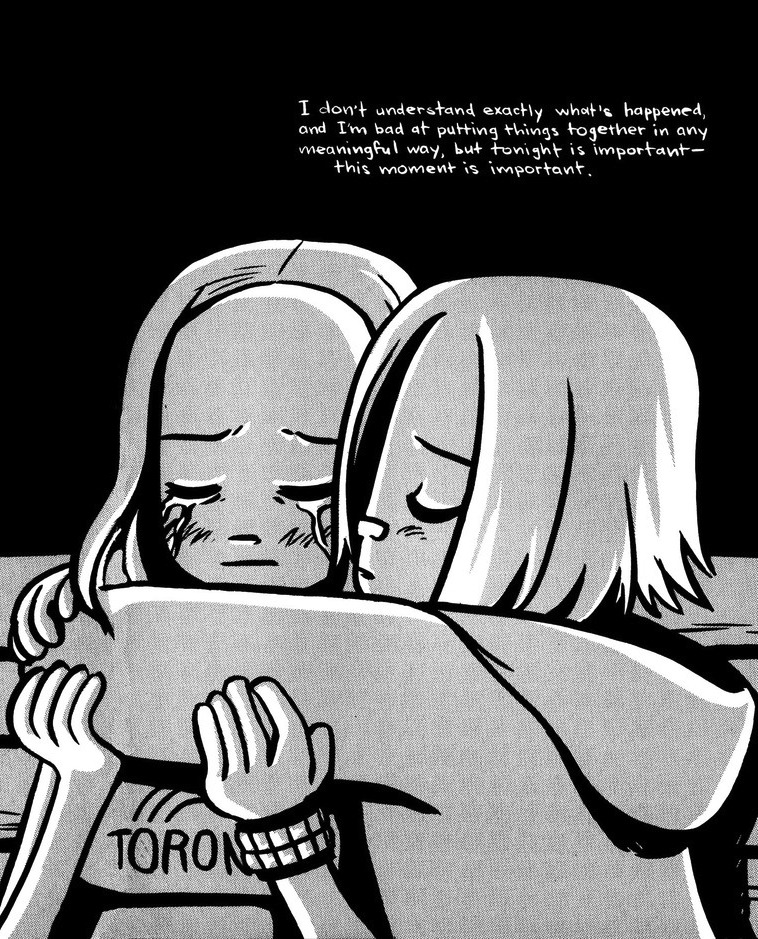 And this is the main message of Lost at Sea. Depression and anxiety are possible to overcome, but not easy. That it often takes support from others, and that things won’t always be perfect. The final scene of the novel is a tad bittersweet, but largely hopeful: Raleigh acknowledges that what happened in her past won’t go away, and how sometimes she still feels awkward and wonders if everyone hates her. But she also talks about how they’re all friends in the future, and that (eventually) she maybe just stopped worrying about not having a soul, and that she’s gradually started feeling happier. Depression and anxiety aren’t things that just go away out of nowhere, they’re things that people have to fight for a long time to be rid of. But eventually, they can be overcome, especially with help from others.