Peaky Blinders, the BBC’s recent Birmingham-set gangster drama from the pen of Steven Knight, finished its first series with an episode that kept viewers on the edge of their seats for the full thrilling hour. It went out with quite the bang – literally. But the ending, just the right amount of climax and closure, pointed to two potential futures for the story: either Grace lives or Grace dies. It was a perfect cliffhanger. That is, unless the latter proves true.

Grace by name and by nature, played by the spectacular Annabelle Wallis, she is introduced as the enigmatic chanteuse. Her soft blonde curls, delicate features and lithe figure perfectly construct the traditional ingénue. Quickly, though, her opening scene proves to challenge that and, though she’s singing a rather mellifluous rendition of Carrickfergus as she does it, Grace is seen mucking in at the pub in an effort to convince the landlord, Harry, to hire her. As it turns out, she’s a little tougher than she looks. Before the first episode is over, it becomes clear that there’s nothing innocent about the Irish operative – a first insight into the use of her femininity to trick others into believing she is not a threat.

As the series develops, Grace’s darkness emerges. Her motivation is primarily vengeance and, despite his romantic little gun lesson, she’s more comfortable with a gun in her hand than Tommy. Constantly reaching for her weapon, it’s Grace who is responsible for the first fatality of the series. Far from the soft-spoken, sweet-natured girl that she portrays, Grace appears to control her femininity and allows people to underestimate her in order to assert her power. By the end of the series, Tommy has given up so much information to her that she holds the power to destroy the Shelbys. What is so compelling is that the series sees Grace cultivate that power, while falling in love with Tommy prevents her from wielding it. This is the high wire act upon which the series has been walking very tentatively throughout its six episodes. 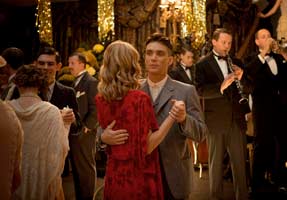 Having created such a captivating character, Knight has made it hard to imagine the series without her. Among the reasons to keep Grace alive, the chemistry between Annabelle Wallis and Cillian Murphy is hard to ignore. Their dynamic is electric. Not having it as a key aspect of the next series would be an upsetting adjustment. In the words of my favourite captain, they’re just too pretty for Knight to let them die. More problematically, to kill Grace off would be to fall into the trope of “fridging” a character – that is, to kill her off to advance the hero’s (or, in this case, anti-hero’s) ongoing storyline by exploring the emotional repercussions of his girlfriend’s death. In the case of Peaky Blinders, that would extend to Inspector Campbell as well as Tommy. Furthermore, it would most likely lead to all future love interests for both characters being measured against her.

The first series made a solid effort towards fleshing out all three female characters in interesting, unique and nuanced ways, with Grace an integral cog in a beautifully crafted machine. To reduce her to nothing more than a love interest, or former love interest, for the sophomore year of the show would be a disappointing twist. It would effectively undermine the strength of the writing for Grace that has built her up as a complex and believable character. It sends the message that she is punished for her sexuality. To kill her off, to silence her and eliminate her experience within the plot, would leave the conflict between Tommy Shelby and Inspector Campbell to nothing more than a disturbing clash of testosterone. The scene between Grace and Polly was everything I’d longed for, expertly played and frighteningly tense, and I now long for more of that dynamic to pepper the second series.

Finally, it would simply be a dull creative decision. If the sound of the gunshot marked Grace’s demise, that would be that. If she isn’t dead, it opens up a lot more options for the story. If she isn’t dead, who is? Or, is anyone at all? The potential for surprise is infinite.

If Grace is alive, Knight created a perfect cliffhanger, one to keep viewers eager for the next chapter of the story, but without sacrificing the quality of the show for a sensationalist storyline. If she’s dead, my love for the series, and its special mix of high quality writing, cinematography, casting and music, will be thrown into question. Grace has been the fixed mark on which the story has turned. To keep her alive is to keep the integrity of the story alive.

Much to my relief, the BBC recently commissioned a second series so viewers will find out Grace’s fate in 2014.

Posted on Nov 2, 2013 by
Jessica Eve Kennedy
English student with a habit of working West Wing references into any situation. Likes to write extensively about TV and feminism.
Follow