4 all-ages comics that really are for all-ages

Have the comic bug? Want to pass it along? You know, you need to start the addiction when kids are young. Here is a listing of some great all ages comics for you pass on (or read yourself). 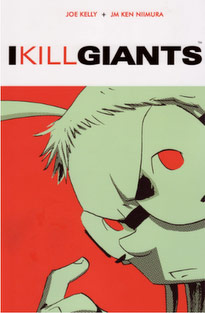 I Kill Giants, by Joe Kelly and JM Ken Niimura, was originally released as a seven issue self-contained series from July 2008 to January 2009. It is one of the best books for ‘all ages, I have ever read.

The story follows Barbara Thorson, a pre-teen girl in a smallish coastal town. She has the same problems that every young girl has (or so I am told – having never been a young girl, I have nothing to base the comparison on) bullies, stupid teachers, Principals and a complete feeling of isolation in a very crowded world. Very quickly we learn that on top of all the typical pre-teen drama, Barbara also kills giants. Using her war hammer named Coveleski, so named for the player from the early days of baseball, Barbara bashes in the heads of any giant she sees. She has imaginary friends and a plentiful lack of social skills. Her family does not understand her or her obsession with role playing games and there is a clearly stressful family dynamic at work that slowly reveals itself. Barbara has a real friend that tries hard to understand her and a school counselor that is trying to get her to open up and deal with the personality issues that are developing. But sometimes it seems their efforts are in vain.

Much of the story relies heavily on the visual iconography being used. The images in the story are a mix of what we would call ‘real’ and what we would call ‘fantasy’, with no clear boundary between them. The reader is left with the impression that this is the way the world must seem to young Barbara, a girl that clearly has a rapidly worsening stress-related personality disorder. As her behavior becomes increasingly anti-social, the art becomes more frantic, using more aggressive panel layouts and larger panel sizes.

For anyone with teen and pre-teen children in their lives, or remembers their own teen years as difficult, this book is very powerful. Barbara has some serious causes of stress in her life, and while those causes are pretty easy to guess as the story begins to explore them, their eventual revelation is surprisingly powerful. The climax of the story is filled with real world events and metaphorical images, and yet at no time does the story tell you which are real as the people around Barbara seem to be as involved in the events as she is.

I am a 44 year old adult human male, and I am not ashamed to admit that the book managed to get me choked up as easily as it made me giggle. Anyone that enjoys feeling like they can identify with a heroic character will love this book. 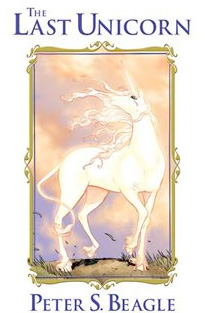 The Last Unicorn graphic novel was based on the 1968 novel of the same name by Peter S. Beagle. This adaptation is written by Peter B. Gillis with art by Renae De Liz and Ray Dillon and is something to behold.

The story follows the adventures of the last of the magical creatures known as Unicorns. She, Unicorns have no names, decides to leave her place of safety and solitude to search the world and see if she truly is the last of her kind. She meets a variety of characters along the way that lead her through her quest, climaxing with a confrontation with the red bull and the king that controls its power. The story is laden with metaphor, both intended by the author and those which the reader will bring to the experience. To tell much more would be to spoil the story. There is very little in this story that will come as a surprise to most adults, but that is not the point here. The real point here is what the reader brings to the story will determine what he or she gets out of it. While that is true of most fiction, it is particularly the case here. Younger children will not have the same experience with this story that an adult will have.

The color palette is as rich as it should be in a magical world. There is no part of this package that isn’t stunning. From that standpoint, this book is worth every penny of the $25 cover price.

I think this book would be more enjoyable to people who recall the movie more fondly than the original novel. Someone with no background in either, age depending, may find this a bit light and even predictable. But anyone that enjoys the old style of ‘fantasy and magical world’ stories will enjoy this for what it is, a fine fairy tale world brought vividly to life on the page. 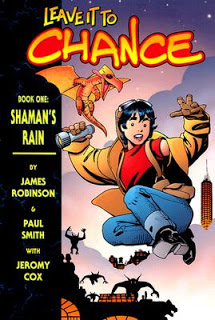 All-ages genre fiction that does not insult the intelligence of at least some of its audience is rare. The balance between fun for kids and fun for adults is next to impossible to strike, and when it happens the story still needs to be worth reading. James Robinson (Starman, The Golden Age) and Paul Smith (X-Men, The Golden Age) not only manage that balancing act, they make it look easy with leave it to chance.

Collecting the first four issues from 1996, this volume is a fairly quick read as most all-ages books are for an adult. The story is nothing all that new, but the goal for the book is just to be a fun read. This book is that and a bit more. This is the story of Chance Falconer, the daughter of Lucas Falconer, who is the mystical protector of the town of Devil’s Echo. 14-year-old Chance and her pet dragon St. George try to solve supernatural crimes and mysteries, behind the back of her father. She desperately wants to be the next in a long line of Falconers to protect the city, but her father will not see her put in danger. 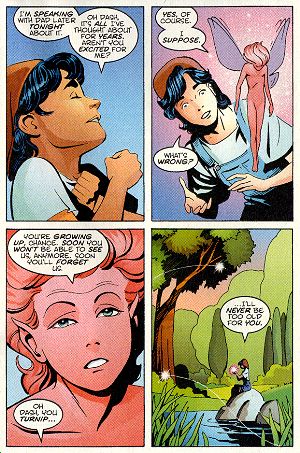 That is the concept in a nutshell. There is not a lot of meat to the tale but the charm of this book is in the usual places. There is always excitement and danger but not such that you ever really doubt the outcome. You instantly want to be on Chance’s adventure and suddenly want a pet dragon (which looks suspiciously like another dragon Smith is known for drawing).

Most ages will enjoy this. Kids can identify with Chance and the adventures are wish-fulfillment. Adults can enjoy the escapist quality of the stories. There are a total of 3 collections and they would be well worth picking up for anyone that wants some fun, regardless of their age. 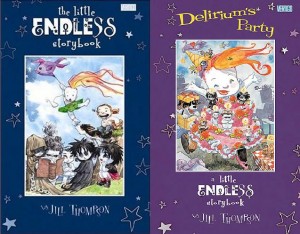 The two volumes of The Little Endless Storybooks by Jill Thompson that are currently available are just wonderful. The first Little Endless Storybook is the story of Delirium’s search for her dog Barnabas. The second volume is about a party Delirium wants to throw for her sister Despair. Both volumes are so subtle in their storytelling that they will deceive the reader into thinking they are just quick little reads. There is a depth her that is not immediately evident.

The stories centering around the little Endless are every bit as rich as their Sandman counterparts but are still accessible for younger readers. There is a lot that happens between the lines of these tales and a careful read will give an adult reader a great deal to think about while the younger readers will enjoy the story on the surface. 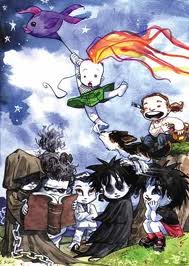 Beautifully painted watercolor images are fun for eyes of any age and have a great deal of humor. These books are fun and rewarding reads for everyone and can easily be read aloud to very young readers. I strongly encourage you to check these out.

These are just a couple of great all-ages comic books available. There are many more and I urge you to visit your local comic book store to search them out and pass them on.

Posted on Dec 17, 2012 by
Taylor Ramsey
While I quietly wait for a really good excuse to go on an interstate mayhem spree, I read comics and watch movies. While I do the "writing" here, my wife makes it readable.
Follow