Dave Sim is one of the most polarizing figures in the comic book industry today. His political and religious views have earned him a place out on the fringes of society and have driven him to withdraw from public life. Sim’s massive talent and contributions to the industry overall deserve wider recognition. So when I say “like Dave Sim”, ultimately I mean his amazing body of work. For those of you turned off by the man, here are five reasons to allow yourself an opportunity to discover (or rediscover) the life’s work of a master of the art form. 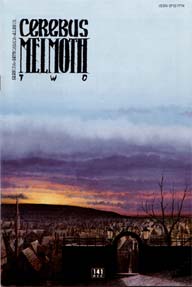 The elephant in the room creatively speaking is Cerebus, Sim’s 6000 page narrative that ran from 1977 to 2004. Given there are 300 issues to choose from, is hard not to point to several sections of this amazing series but I have decided to highlight one of the better collections. Melmoth tells the story of Oscar, a supporting character seen in the previous book Jaka’s Story.

Based almost entirely on firsthand accounts of the last days of the great Oscar Wilde, this is a deeply emotional and harrowing story. The personal pain of the characters is almost too much to bear. Knowing that these events actually happened to real people makes this book stand out in a medium where the superficial and artificial are the norms. Cerebus himself is almost entirely absent, making this book a good place for the uninitiated, and the end of the book leads directly into the next collection drawing readers deeper into the world of Cerebus. Melmoth is the darkest of the books visually speaking and the sparse art leaves you feeling like you have visited something from a half-remembered dream. Normally the world of Cerebus is visually rich and complex, but here the heavy shadows and negative space cover this world like a shroud. Certainly not the funniest of the books (the first 100 issues or so are where you will find most of the humor) but to my mind, the most satisfying. The later books became somewhat bogged down in the controversy surrounding Dave’s beliefs, but the first 200 issues are a joy to read and Melmoth was a creative high point.

4. The Strange Death of Alex Raymond 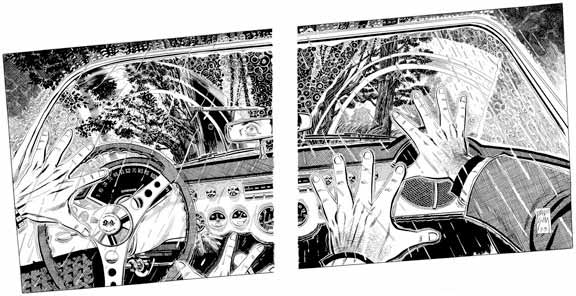 The Strange Death of Alex Raymond was a co-feature in the Glamourpuss comic and has not yet been collected in a single volume. In fact the story has not yet been finished and may never be. As long as you can get past the story not having an ending, finding the original issues to read what is available is truly worth the effort. The story is a somewhat fictionalized account of the late comic creator, Alex Raymond’s, last days and is a stunning work of Sim’s photo-realistic line art. While Sim has said that this is still a learning process for him that is not evident in these amazing pages. Mixing the photo real with more traditionally styled art creates a real treat for the eyes and a very interesting story for the brain. 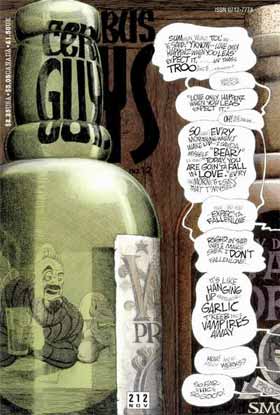 ‘Lettering’ I hear you ask? How can the lettering be a major factor in a comic? Or at least why should we care? This is easy to explain. In such a visual medium if you are not using every tool in the toolbox, you are failing to exploit the medium to its fullest potential. It would be like Maxfield Parrish or Vincent van Gogh painting sunsets with only one color. The artwork is only part of the story in a Dave Sim comic. Power, inflection, timing and even mood are all conveyed in the lettering of one of Dave’s works. The page comes to life in ways an ordinary comic cannot and humor works particularly well when lettered by Sim.

2. The ugly personal lives of artists

The personal lives and opinions of artists are rarely pretty. Every great genius in history has had issues in his life just like all of us. But with exceptionally creative people, things get a bit more complex. Dave Sim is not a popular person thanks to some of his more extreme views. However, society cannot ostracize one creative person for their beliefs while worshiping another without becoming a hypocrite. If crazy behavior or questionable lifestyles were means for dismissal from comics the short list would start with Wally Wood, R. Crumb, Al Capp and Steve Ditko. Add in ‘socially awkward’ and you can eliminate virtually every great creator in the medium. Comics is an industry of outcasts. Then again take the truly great from any creative medium as examples. If you set aside those people with mental issues, haunted minds, controversial opinions or even criminal behavior our museums and movie theaters would be very dull.

Jackson Pollock, Salvador Dali, Charlie Chaplin, Pablo Picasso, Vincent van Gogh, Ingmar Bergman, Woody Allen and Andy Warhol are just a few that came to me in the time it took to type their names. There are literally hundreds of examples of people whose art has touched us, but whose socially unacceptable behavior would be abhorrent to us. In my opinion let the art speak for itself.

1. The state of the industry

The current state of the industry is debatable as is the financial health of many creators. However, consensus is conditions are much better now for creators and Dave Sim had a lot to do with that. The Creator’s Bill of Rights that he helped draft in 1988 was largely mocked at the time due to the power structure of the industry. Many artists and industry executives thought it was just too radical to be a good thing. Twenty years later much of what was in that document has been quietly adopted as industry standard practices.

On the publishing side, the trade paperback format was not new when Sim started releasing the “phone book” collections of Cerebus, but the early success of those volumes cemented reprint collections as a viable sector of the market.

I hope these reasons are convincing enough and there are many more examples that can be applied to just about any person who is controversial. Artists have issues and are not always the easiest people to get along with, but most creative people will tell you that what they want you to see and appreciate is the art not the person behind it.

Posted on Nov 21, 2012 by
Taylor Ramsey
While I quietly wait for a really good excuse to go on an interstate mayhem spree, I read comics and watch movies. While I do the "writing" here, my wife makes it readable.
Follow