Arthur Christmas Review: Finally! A Christmas Movie That Will Melt The Heart of Your Inner-Cynic

I know what you’re thinking. Christmas is mere weeks away. We’re getting into prime gift-buying time. This has got to be another one of those deplorable, holiday cash-ins, right? Well, not exactly…

Sure, the fact that Arthur Christmas was released in cinemas around this time last year, and has now popped up on DVD/Bluray a whole year later, smacks of money-grabbery. I mean, come on, a year between cinematic release and DVD premiere? Call me cynical, but when I hear the sound of hooves I think “horses”; not “good-natured family fun movie about Christmas that wasn’t held back a year just to make some more cash”. However, I can forgive this act of treachery for several reasons.

Firstly, Arthur Christmas is brought to us by the fine folks at Aardman Animations; the team behind hilarious high-seas caper The Pirates! In an Adventure with Scientists and the Oscar-winning Wallace & Gromit: The Curse of the Were-Rabbit. To say that Aardman is an organisation blessed with hardworking people of integrity would be apt. In each picture they have made, every scene is crammed with the kind of loving craft that is nothing short of admirable. If you can, get your hands on a copy of Pirates! and check out the DVD extras – they’re full of painstakingly in-depth features on how the team put the film together. Ironically, Aardman’s likability actually makes a cash-in release sit much more comfortably with me, and this is the second reason why this isn’t just another Christmas cash-cow. Arthur Christmas only brought in around $150,000,000 at the box office from a reported $100,000,000 budget, and I just can’t bring myself to fault Sony for releasing the film now in order to get some more money from it. Any money that goes towards another potential Sony-Aardman collaboration is nothing short of bloody wonderful.

Finally, and most importantly, Arthur Christmas is ace. Ace to the point of future Christmas-time movie classic status. You’ll be watching this one between your festive favourites. Stick this between Die Hard  and The Muppets’ Christmas Carol on a frosty mid-December day and I’ll believe that the world is the most wonderful place it could possibly be.

So, what is Arthur Christmas about? What sets it apart from typical festive fare? Well, it all begins with a delightful premise: that Santa isn’t all magic and inexplicable mystery. In fact, Christmas is a precise, militaristic operation performed each year by a team of millions of elves, Santa’s super-efficient son Steve and Santa himself in a doddering old English army general kind of role (think Stephen Fry’s General Melchett from Blackadder Goes Forth, but with the added sympathy you’d give Santa). The best part? No sleigh, no reindeer…just a mammoth aircraft known as S-1 that acts as a S.H.I.E.L.D-like base of operations. It has camouflage and everything!

Our titular hero is a cheerful desk jockey working in the bureaucratic heart of the operation: the Letters department. Every year, Arthur bumbles about like a baked Wizard of Oz style scarecrow. He trips over things, leaves doors open (“It’s the North-Pole for goodness’ sake!”) and generally, though inadvertently, causes trouble. He is lovable though. He replies to a large chunk of the millions of letters Santa gets every year with reassuring cheer and warmth; he’s a buffoon you can’t help but root for. Oh, and just to add a little spice to proceedings…it turns out he’s Santa’s rather ordinary second-born son.

When a gift intended for a girl who had written Santa a particularly adorable letter is left on the factory floor, the operation’s merry facade begins to crumble. Santa is revealed to be an old man who has grown tired of his role. Steve’s interest in having the statistically most successful Christmas ever overshadows the importance of a young girl’s happiness on Christmas day. All things point to unhappy holidays for one child. Seeing the callousness of those around him, Arthur sets out with a wrapping Elf named Bryony,his bonkers grandfather and a geriatric reindeer to deliver the forgotten gift; and on a good old-fashioned wooden sleigh no less. 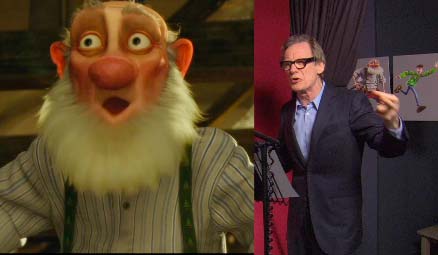 The voice work is solid, as is always the case with Aardman. Bill Nighy stands out as grandpa Claus with a fantastically batty slant to his usual slippery tones, and credit to James McAvoy for nailing a likable dimwit. I kind of wish McAvoy dated David Beckham, because I’d be able to make a super-funny joke about “nailing a likable dimwit” right now, but he’s happily married to a seemingly lovely woman, so…yeah, no funnies.

The plot hits upon a lot of the typical “journey-movie” notes. They face obstacles, they overcome them, you know the drill. Thankfully, Arthur Christmas does not hedge all its bets on comfortable familiarity. The details of our merry gang’s encounters, scrapes and escapes keep the film entertaining for kids and adults alike. As is typical of Aardman, the humour is suitably broad and often belly-laugh funny. From grandpa Claus’ insistence that the Serengeti is France (they have “the odd stray” elephant in France, apparently), to a brilliant scene where Arthur and his companions are mistaken for UFO-operating extra-terrestrials by a gun-toting man in Idaho. Yes, it is as gloriously manic as it sounds. The film doesn’t shirk from drama either. Sure, it’s light, but there’s relatable stuff here. Santa is becoming disillusioned, he is getting old. Arthur wants his father’s approval, Steve wants the Santa job. It’d be compelling if it weren’t candy-coated with sweetness.

I’d like to single out the opening Christmas Eve delivery set-piece for significant praise. It’s original, very funny and filled with thriller tropes that you can’t help but welcome. Elves dart around houses delivering gifts with the same attention to detail and precise operational skill of a Black-ops squad. Metaphorical bombs are diffused, tenuous places of hiding are taken and the enemy is subdued…with stocking full of treats! It’s one of the better openings in recent animated memory, and stands out in a film full of enjoyable moments. 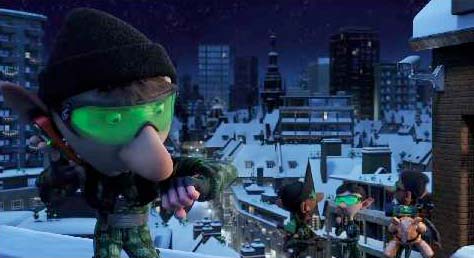 There’s not much to criticise here, other than the fact that you will see the ending coming from a mile off, but you wouldn’t really want it any other way after 90 joyous minutes. Sure, it sags a little here and there, but most will be having way too much fun to notice. So lend a little Christmas spirit to the cynic inside you and look past the suspicious release date. Give Sony/Aardman the gift of understanding and let yourself be won over by a film that’s more festive than terrible sweaters, drunken grandparents and crappy weather put together.

Posted on Nov 20, 2012 by
David Tatlow
You can call me Tatt. I like all kinds of films, as well as talking to/boring people about them at great length, so brace yourself.
Follow