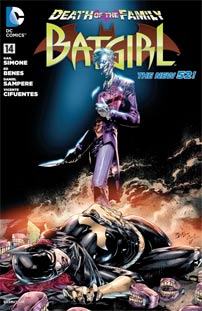 The Death of the Family storyline is in full flow with the Joker returning and exacting vengeance on Batman’s family. This title is part of that crossover storyline and Batgirl is targeted as part of the family. In recent times Barbara Gordon has been a communications expert at Batman’s side known as the Oracle. Prior to that she was actually the original Batgirl, until the Joker knocked at her door, shooting her at point blank range causing her to become paralysed from the waist down. Batgirl is back and Gail Simone has created great interest in a character that has regained the use of her legs and taken back her mantle. Simone is one of the few female writers at the big two companies and has been very successful with her work on Wonder Woman, Birds of Prey and Secret Six. Ed Benes has also been highly regarded with runs on Action Comics, Justice League, Batman and Birds of Prey. They have crafted a solid book, which has focused on Batgirl’s introspection at being a hero again and dealt with the ghosts of the past. Unfortunately one particular ghost is about to come a knocking.

The Death of the Family arc has begun with an explosion, and the tie in books need to supply extra support. Batgirl cannot just be treated as a side title because Barbara’s history with the Joker is only second to Jim and Bruce’s and deserves the time devoted to it. This is a book that delivers that respect and the narrative is consistent with the earlier issues and lives up to expectations. Batgirl continually self-reflects as she handles a frankly terrifying phone call and her subsequent conversation with the Joker. There is a level of intimacy with Gail Simone’s Batgirl, as we feel everything with her, the anxiety, her self-doubting, her hopes and her fears. Her thought boxes are used judiciously and do not overrun the page or story being played. She has written the Joker perfectly and he is exactly the same character and voice as in Snyder’s Batman book. Ed Benes artwork is very detailed and he does draw very attractive women. Barbara is pencilled particularly well with excellent ranges of emotions but most importantly, her postures are telling. The first page is testament to this as Batgirl’s whole body is in shock whilst on she is on the phone. I do sometimes feel that the shading and pencilling is a little over detailed especially on clothing and outfits. It becomes dark and almost murky looking which is odd because the colours are bright and vivid. His Joker does look fantastic but he appears to have replaced the belt with strings holding his face in place.

This book is excellent as a stand alone book, let alone be part of a crossover arc. Barbara has own story with the Joker and the book could fully represent that alone. It is a well-paced book with suitable highlights on Barbara’s state of mind as she confronts her demons. It is important that the book does not wash over her tortured past at the hands of the Joker and Gail places it at the forefront of Barbara’s mind. Since Batgirl issue 1, we have witnessed Batgirl’s growth as a hero and her final proving ground is here as she meets her nightmare. The balance of introspection and action is well managed and the final scene with the Joker does not let you down. There is a sickening scene at the end and a twist that gives additional intrigue to an already interesting book. An excellent start for Batgirl as she begins to stop the death of the family.

“That was a different time. That was a younger me”

Posted on Nov 18, 2012 by
KulbirMann
Long time comic lover, full time surgeon, aspiring writer. Always happy to be criticised and reply with a vengeance! Feel free to contact me or leave comments.
Follow