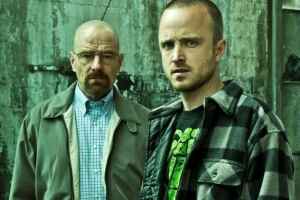 Sunday, August 11th marks the beginning of the end of Breaking Bad. With only eight episodes left of the tightly constructed drama anticipation is high all around. After four and a half seasons it’s been a crazy ride following Walter White’s journey from mild-mannered chem teacher to badass kingpin. Along the way we’ve been treated to intensive exploratory dialogues, a handful of tripped out drug induced sequences, science revelations that bring back the childhood nostalgia of watching Dr. Nye, and death by ATM. I can’t wait to see how everything concludes. So many questions still linger… [Spoilers] Are Walt and Jesse really going to be able to clean up their lives? What’s Hank going to do with his newfound revelation? Will anyone ever be able to find a reason to like Skylar? Who’s going to die (they can’t all live happily ever after after all the evil Walt’s sown)?

There’s been a lot of extra tidbits revealed recently along with the premiere date. A talk show to analyze each episode will be added to AMC for this season, Talking Bad. Also, a potential spinoff for criminal lawyer Saul Goodman is in talks – yes, please make this happen! It’s roughly four months to go until the show returns, here’s a little behind-the-scenes to hold us over for now:

Posted on Apr 18, 2013 by
Rosanne
Rosanne spends her free time hanging out with her husband, constantly searching for films that are exciting, evocative, enriching, or emotional. She also likes alliteration.
Follow