Breaking Dawn Part 2 Review: The Least Cringeworthy of the Saga

The Twilight films have been known to attract both worshiping fan(girl)s of the books, and those who weren’t so fond of the books but wanted to see it adapted into something superior in the films. While reading New Moon and Eclipse especially, there’s no doubt the source material is flawed: the same annoying angst-ridden conversations between Edward and Jacob occur a hundred times over, Bella and Edward recap old feuds and conflicts with villains appear inconsequential and dull. With all this redundancy, the material could have been condensed to enhance the enjoyment of viewers. The cheesiness of the dialogue is less overt in text, but cringeworthy and laughable on screen. I entered Breaking Dawn Part 2, expecting mocking it to be my sole feature for entertainment. While it does fulfill this part of my expectation, it also pleasantly surprised me in a few critical ways. 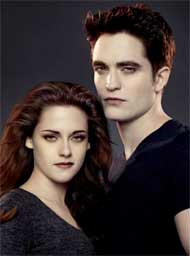 The visuals for Stephanie’s Meyer‘s saga have always been of decent quality – the use of color and lighting makes even the most awfully written scenes look pretty. The stylized opening credit sequence is very impressive with its contrast in color and high speed scenery pans, emphasizing themes of change and growth. The caked on white make up for the vampires, which was at it’s worse in Twilight, is a lot more subdued and sophisticated here, and it does not detract from scenes. Shots of the vampire running are often disorientating, and the special effects team appear to have changed their minds again on how vampires should look when they are killed. While the effects are not always great for the vampires, it’s a highlight for the wolves. Their silky sheen coats remind us that these are protectors rather than ill-intent monsters. Let’s not forget the continuity problem of the vampires lack of sparkling when exposed to sunlight!

Another highlight of the film is its soundtrack. The score is beautifully composed by Carter Burwell, who did the background tunes for Twilight. Both familiar compositions and new material succeed in portraying the extraordinary fantasy world of Meyer’s, whether from epic battle drum-rolls, to whimsical piano pieces. It manages to portray emotion when it needs to, from romance to drama. The songs emphasize themes of loss (of identity, love) and hope, giving the soundtrack that dark indie feel the films are known for. Standout tracks include “The Forgotten” by Green Day, the lead single on their newest album – Tre! ; “Heart of Stone” by Iko – and Part 2 of Christina Perri’s ‘A Thousand Years’ makes a re-appearance for the ending montage sequence. Even if you hate the Twilight films, the soundtrack is a must have for any alternative music fans.

Aesthetics aside, the movie is only as good as the source material – but the writing manages to improve on a lot of the flaws the previous two films had. Due to circumstances explored in the movie, the vampires and wolves start to work together, eliminating a lot of the conflict which was overexploited before. Those who saw the last film, will find Jacob’s new found imprintee, while creepy, a positive. It is a sigh of relief to see a movie where Edward and Jacob don’t argue over who gets to have Bella or who is the ‘better man’ (I think they’re both awful).

The film explores new territory: Bella discovers life as a vampire, enjoys her married life, learns to be a mother and takes more responsibility. It makes little sense that vampire Bella is stronger than all the Cullens, yet her specialist power is rooted in defense. This Mary-Sue approach may be off-putting to some. Many new characters are introduced, and this is a plus. We get to see just how varied their powers and beliefs can be. Most of them are likable and bring new perspectives to the table in a short space of time.

Unlike before, the conflict brought to light by the Voluturi seems to have a slightly stronger base than just ‘because we can’. The big plan to resolve of the conflict comes across as logical and mature, a nice change from reckless and impulsive stupidity Jacob and Edward are known for. The big fight scene near the end of the film is intense – I was about to cry as a number of  my favorite characters were killed off in gruesome ways. The mixture of wolves and vampires working together with different powers, versus the army of Volturi which look like the hooded guys who hit their faces with planks in Monty Python and the Holy Grail – is a marvel to see. You begin to wonder if the good guys will actually win. The clever plot twist you may hear critics talking about was actually mentioned in the book, it was just explored in more detail here. The conclusion of the film is a very satisfying one, and is less corny than I remember in the book.

The acting is more believable this time around – Jacob and Edward are not being angst ridden teenagers (Edward is over 100 years old now, what’s with that?), so their characters appear more realistic – perhaps the actors found their driving emotions easier to relate to. A few awkwardly delivered lines from Kristen Steward or Robert Pattinson doesn’t help the sometimes clunky dialogue, but everyone else in the cast fills out their roles excellently. Dakota Fanning doesn’t have a single line of dialogue but her evil glares still remind you she is a badass, Aro is a carbon copy of the version in the book – emphasizing words in the right places – and Carlisle and Alice perform their roles effortlessly. Let’s not forget Billy Burke who is great as the single father not understanding his daughter one bit (and let’s not forget that pornography-ish scene with Jacob!). 11 year old Mackenzie Foy is adorable as Renesme.

Despite its fair share of giggle worthy moments, Breaking Dawn Part 2 reduces a lot of the problems the previous movies had, and brings a memorable, moving and satisfying conclusion to the saga (I mean, who can really remember what happened in Eclipse, besides Bella breaking her hand?). It is highly recommended for those who were earlier put off by the films but still want to see one of Stephanie Meyer’s books done justice. To those who never liked Twilight in the first place, you will still hate this one, but there are better films in the Saga to laugh at if you don’t take it seriously.

Posted on Nov 20, 2012 by
Jordan
I started writing about anime when I was 15 and it looked far worse than this. If you like my articles, check out my Goodreads to see what I'm reading.
Follow