Brooklyn Nine-Nine: Sitcom Gold or Flash in the Pan?

During last year’s Comedy Central Roast of James Franco, the roasters took turns making fun of fellow roaster Andy Samberg and his upcoming sitcom Brooklyn Nine-Nine. Roaster Jonah Hill claimed it would easily be cancelled after five episodes. However, it was SNL alumni Bill Hader as the ‘President of Hollywood’ who captured the show’s cultural preconceptions perfectly. He commented on Samberg’s show by saying: “Funny cops…you’re always pushing the envelope, Andy”.

Admittedly, its easy to scoot past this show without notice. Thanks to its bizarre marketing campaign, the show appeared to be yet another Office-like satire devoid of laughs or thrills. However, the show, from the hilariously surprising pilot onward, transforms into a charming and blissfully entertaining sitcom. How does it do this? With good ol’ fashioned comedic timing. I know, this is relevant to all sitcoms – for there would be no sitcoms without this glorious invention.

However, Brooklyn Nine-Nine is the first sitcom, arguably, since Parks and Recreation to get this right. Despite my overwhelming praise, the question has to be asked: where is the tension in this article? Well, despite the show’s entertainment value, I still have a few gripes. Despite its overall quality, I fear it may not have what it takes to even complete three or four seasons. I looked back on the first season’s efforts (18 episodes released so far) to offer my analysis of this bumbling yet enthusiastic creation. To make it simple, I’ve decided to list the show’s shiny positives and debilitating negatives. Hopefully, by the end of this, I can reach something of an informed conclusion. 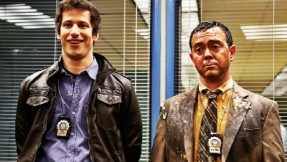 Without interesting characters, sitcoms can tear at themselves until they fall apart. Beyond the hype and monetary gain, sitcoms should always look to the future. With comedy being entertainment’s most subjective genre, the characters need to rise up and deliver what they’ve promised.

I may not be an expert on all of this, for my evaluation of this series may be entirely different to everyone else’s. However, agreeably, certain characters define particular shows. Ricky Gervais’ character David Brent single-handedly saves The Office from being mundane and cheesy (sorry fans). Lead characters can immediately become tiresome. Representing target markets or social circles, lead characters normally play it straight compared to the wacky supporting characters. In particular, Topher Grace’s character Eric in That 70s Show is an intellectual titan compared to his scraggly-haired counterparts.

In Brooklyn Nine-Nine, however, Samberg’s character Detective Jake Peralta is just as silly as the rest of his police precinct’s inhabitants. In the pilot episode, Peralta comes to terms with his slacker Police Captain’s retirement and his new Captain(Andre Braugher)’s introduction. Dealing with his bizarre co-workers accordingly, Peralta treats his and their lives like forgettable jokes. As the rough-and-tumble detective, his ego leads him into disastrous situations.

Touched upon succinctly by Sergeant Terry Jefferds (Terry Crews) during the pilot, Jake’s impulsive behaviour guides the first season. Thankfully, the show takes the ‘black police captain’ stereotype in a new direction. Acknowledging the archetypes’ seminal traits, the show balances dry wit and hysterical gags. Samberg and Baugher’s chemistry elevates this sitcom above most of its type. The robotic Captain and sprightly detective lead this bumbling team of morons admirably.

Thankfully, the casting directors hit their A-game with this particular series. Overcoming his shoddy movie choices, Samberg re-discovers his laugh-out-loud comedic chops. Before the pilot’s conclusion, Samberg’s overt charisma and baffling charm bring Peralta to the forefront of this straightforward sitcom. However, despite my praise, I can see how this series might descend into chaos and misery. Samberg’s comedic muscle flexing, despite elevating Brooklyn Nine-Nine above most sitcoms, can become tiresome.

Known for three minute sketches on Saturday Night Live (seriously, watch the Lonely Island/Michael Bolton music clip!), Samberg will have to push himself before he will be able to carry this award-winning sitcom. Fortunately, his Peralta and Holt’s awkward friendship immediately hits it stride. Braugher’s character, confirming the major difference between himself and most NYC Police Captains in the pilot, comes off as a necessary hindrance. His emotionless stare and stiff reactions become hilarious gusts of fresh air compared to Samberg’s gleeful antics. 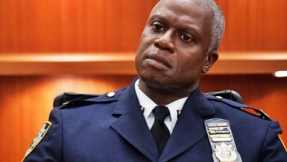 Despite the engaging characterisations and impressive comedic timing, the story-lines, in nearly every episode, fall flat. Admittedly, these words seem a little harsh. Sitcoms rely on their characters and actors much more so than their small and over-arching narratives. However, this show’s mysteries and sub-plots become afterthoughts.

In each episode, the story-lines lead the characters down simplistic paths. Pushing each episode forward, these stories become small, almost insignificant parts of a much grander vision. If anything, each episode’s plot serves to move these characters from one skit to the next. Each episode is broken up into multiple plot-strands and sketches.

Unfortunately, Fumero’s talents are under-utilised throughout the first few episodes. Despite her inherent charm and noticeable beauty, her infatuation with Captain Holt becomes steadily tiresome. Despite her chemistry with the other characters, her sub-plots distract from Peralta and Holt’s more interesting story-lines. Despite the enjoyably light tone, the show might want to elevate its over-arching themes and narratives before season 1’s finale.

Producers Phil Lord and Chris Miller(21 Jump Street, The Lego Movie)’s touches rub off on the characters. Known for turning tired premises on their heads, this starkly impressive duo lends a gentle hand to many conventional plot-strands. Despite these issues, the actors lift these sub-plots above desperate and bland. Characters actors and guest spots become second nature to this witty and insightful sitcom. Lo Truglio, seen in many big-budget comedies over the past decade, becomes a sweetheart in the best and worst moments. Thrown at opportune moments, Boyle – beyond being one of the precinct’s many punching bags – is a nuanced comic relief.

Commenting on the characters’ races at random, the show embraces its multi-ethnic cast. Diaz, coming off as another Michelle Rodriguez clone, places her emotions in full view. Matched only by Crews’ ‘Expendable’ character (get it?), her emotional spirals become major set pieces. However, they still come off as insignificant sketches. The women are pushed aside. More could be given to Santiago and Peretti’s characters. They, like many female characters in police-comedies/dramas, fall below the Bechtel test’s dividing line. Hopefully, despite its frolic male characters, the show will avoid transitioning into a misogynistic farce (The Big Bang Theory, in spite of its commendable intentions). 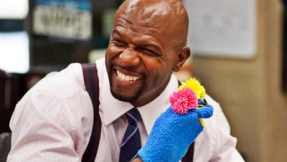 Touching upon a completely baffling situation, Brooklyn Nine-Nine is an insatiably engaging and enjoyable farce. With each sketch, despite their overall attachment to each story-line, certain characters become bumbling idiots and eclectic presences.

With contrasting characters and bizarre situations becoming the norm in this and Parks and Recreation, this type of TV comedy relies on spontaneity. Despite the overt predicability, each sketch becomes increasingly potent and hysterical. The comedic moments rely on awkward moments and quick wittedness.

Thankfully, Samberg’s talents are put to good use. Playing a disgraceful man-child, Samberg’s physicality and snappy timing become vital elements of this ambitious sitcom. Making fun of his co-workers, his accomplishments contrast seamlessly with his overbearing mistakes. In episode three, his winning streak comes to a grinding halt. His reactions, despite his inherent charms, become key to this episode’s success.

Nowadays, many shows, whether they be explosive hits or miserable bombs, have the potential to be cancelled after season 1. It’s a difficult task to keep a major production afloat for extended periods. Studios in charge of these sitcoms rest entirely on viewership and capitalist ideals. To be fair, they, like everyone else, are just looking out for number one. However, some major series’, like the US version of The Office, don’t know when to quit.

Brooklyn Nine-Nine has real potential. From the impressive cast to the spot-on writing, this show’s glorious high points and charming moments separate it from others of its type. With preconceptions eventually boosting the final product, this laugh-out-loud production, despite needing several upgrades before reaching Parks and Recreation‘s status, should be able to succeed.