Chained 2012 Review: squanders a potent chance to examine the poisonous chain of abuse from generation to generation 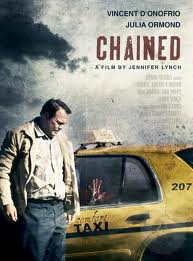 If you take a look at the dispersed career of Jennifer Lynch, the director of the new horror film Chained she seems to be operating under a faulty predisposition. From her critically mauled debut Boxing Helena back in 1993 to 2009’s hiatus breaking Surveillance she is a director unafraid to walk in the shadows of the dark sides of human nature, as her trio of films are overflowing with violence and cruelty, torture and death. The problem arises with a strange narrative instinct to confound audience expectations with some ludicrous twists to supposedly enhance the sensation, to hoodwink the viewers with some clever manipulation which prompt exhausted exasperation rather than trembling transcendence. Alas this instinct is repeated in her latest film which crushes any cogent examination or sober reflection on issues of power and hereditary failures, its a real shame as until its final, strained excursions Chained was a difficult to watch but compelling film, with a slithering performance at its entombed core.

In an effective opening sequence the claustrophobic ambiance of Chained is captured. Sarah (Julia Ormond) is returning from an afternoon trip to the movies with her teenage son Brad (Evan Bird). Hailing a cab some suspicions start to arise as the aloof driver avoids the usual motorway route and speeds the car out in the countryside, their growing fears of abduction are confirmed when the cabbie Bob (Vincent D Onofrio) drags the screaming Sarah into his lair, rapes and beats her to death, then retains Brad as his personal slave in his remote domicile, quite literally keeping him chained to prevent escape. As the teenager evolves into a young man (finally to be played by a twitchy Brad Weber) he becomes emotionally intertwined with Bob’s continuing grisly string of murders, witnessing their brutal dispatches affecting a Stockholm Syndrome, almost symbiotic transformation into Bob’s homicidal protege, unless Rabbit is cloaking his misogynistic feelings in order to finally attempt a fraught escape…

If a film can be likened to a series of interlocking scenes – a chain if you will – then this solid starting film quickly establishes its horrific premise which it then links through , before the stresses of the final act resolution clearly shatters Chained’s credibility. Vincent D’Onforio hasn’t been this distressing since his memorable debut in Stanley Kubrick’s Full Metal Jacket, with his slurried speech and dead-eyed hatred its a powerful performance of uncompromising menace. There is something dreadful about seeing Brad’s slow psychological possession as he moves from terrified youngster to groomed young man, force-fed the idiotic ideology of his surrogate father in the face of the uncompromising march of years which could break the strongest willed resistance, the film toys with a potent theme, that there is something to be said for the chains of abuse passing through the generations from one to another, the poisonous mindsets and addictions being equally genomed in the brain and body but the films left turn finale disintegrates this meditative strand, and transforms the entire ordeal into an ineffectual cul-de-sac, relying more on an absurd and shrug inducing revelation which betrays a lack of faith in the preceding ninety minutes. Until this catastrophic climax is unleashed however this is Lynch’s most assuredly made and clearly delineated horror film, with the Tim Roth starring upcoming film A Fall From Grace one hopes Lynch will unshackle the twists in favour of the terrifying

Posted on Jan 16, 2013 by
John McEntee
Based in London John makes the most of the celluloid capital of UK by attending as many BFI and art cinema related events as possible as well as the LFF every year.
Follow