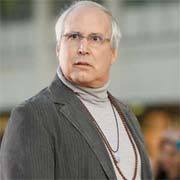 After a long rocky three years on the set of Community, Chevy Chase has reached a mutual agreement with producers to exit the show. This departure is effective immediately. Chase filmed 11 of 13 episodes for the show’s 4th season, two of which have not been shot yet. It’s been no secret the issues Chase has had with the show, especially with the way his character Pierce Hawthorne has been written. Many of these problems had led to a public feud with creator and former showrunner Dan Harmon, who was ultimately fired at the end of the show’s 3rd season. There also has been reports of Chase walking off set during filming and profanity laced tirades. All of this has led to him leaving, and the news really isn’t all that shocking. After having the 4th season being delayed, it was announced a few days ago that the show will return to its old Thursday night time slot of 8 PM on February 7. I suppose the impact of his departure won’t truly be felt unless the show is renewed for a 5th season, which is looking unlikely at this point.

I’m a huge fan of this show, which is probably in my top 3 right now, and this news is somewhat of a bummer. Pierce Hawthorne is an integral part of the ensemble on Community, and his presence will definitely be missed if the show moves past its 4th season. I have been a little worried about the upcoming season since Harmon was fired, mostly because his influence is all over the show. With that said, the cast is still intact for the most part and that’s the best aspect of Community. I feel Harmon left the characters in a good place at the end of the 3rd season, and it looks like we’re primed for some interesting character and story developments. While I’m excited for more Community, I’m also a bit nervous that it may not be the show I once knew. I guess we’ll find out come February 7, but I must say I’m happy to have the show coming back. If you haven’t even glanced at the show, I highly suggest you do. It’s one of the most original and hilarious shows on TV right now, and it deserves more viewers.

Posted on Nov 24, 2012 by
Mike G
I'm an absolute film buff, and love writing about movies and TV. I'm particularly a fan of Asian cinema and hope to introduce people to truly great films from that region.
Follow