Clannad Season 1 Review: Anyone up for an emotional roller coaster?

To start I didn’t actually like Key partially because they make such depressing Visual Novels/animes such as Air and Kanon although Kanon did end happily. But they weren’t bad animes so I thought I’d give this a try because Kyoani was behind and with the likes of The Melancholy of Haruhi Suzumiya, Lucky Star and Full Metal Panic under their belt I believed they could make this amazing. I had a look at the cast and came across the voice actor for the main protagonist which was Yuichi Nakamura, I thought, can someone who’s played villain roles suit being in a romantic comedy? Then there was the female protagonist who was played by Mai Nakahara. My thoughts drifted to Asami from Myself;Yourself and I declared if it was anything like that I’d stop watching. Only so much sadness I can take.

But of course if you’ve played the VN then the anime is definitely worth checking out .

The animation is done beautifully and the fact that Kyoani produces this series is a guarantee that the artwork is superb. Just remember Kyoani’s other works and I’m sure you’d agree e.g. Haruhi Suzumiya, Lucky Star etc. Characters and backgrounds are brilliantly drawn. Motions of all kinds were captured smoothly – that’s not only characters walking but also the wind blowing on their clothes. The body language is also very clear, which speaks louder than words most of the time. I couldn’t find any drop in quality all the way through, I’m glad to say.

All the BGMs were taken straight from the VN. A very varied selection and nice to listen to, plus it was composed to fit the storyline so why not re-use it? But the OP and ED are new.

The opening sequence, Megumeru was nothing special really; just a show of all the main characters and a few clips from the anime, although the song was catchy enough. The ending sequence Dango Daikazuku was a very charming song but sounded very childish and the fact that you saw little blobs jumping around enforced that fact. There’s nothing wrong with that, of course. I rather enjoyed it; nice to see a fun rather than serious ending theme for once. 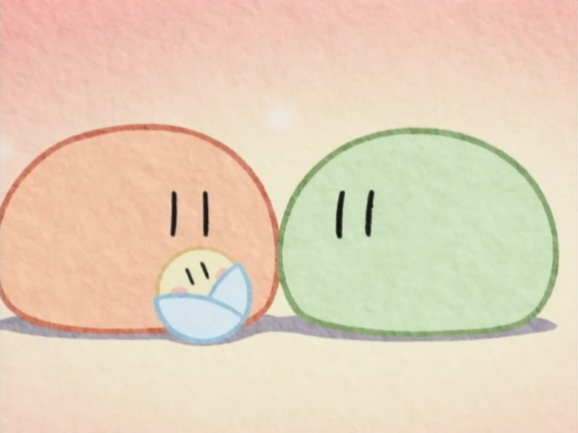 The anime itself was rather unique in terms of its genre. When you see the opening and all those girls you’d expect a harem anime, yet it makes clear who the main female protagonist is at the start, so a harem never has the chance to start and the male protagonist is never interested in any of the other girls romantically even if he is surrounded by them all the time. He just becomes involved in their concerns and helps them solve their problems with help from everyone. I like how this goes against the old cliche that the main character magically solves everything on his own somehow. It’s definitely refreshing to see.

This anime exhibits five main girls, each with their unique personality that would attract different fans. Each girl also gets her own story and character development happens as the story goes on. There’s more drama involved when there are intertwining relationships among the characters. Some episodes focus on one girl, but the overall involved feel of the series is still present. I consider this to be a bishoujo; however, not one that relates to ecchi which I was glad this anime didn’t have. However one of its VNs, the Tomoyo After one is an H game.

The storyline is lovely and more enjoyable with some humour, mostly cute and/or joking around. This anime knows when to be funny and when to be serious, the timings are perfectly done. There were many emotional sequences throughout the anime enough to say it’s a tearjerker, each emotional scene is very well executed.

The overall storyline is about the male protagonist Tomoya Okazaki who’s a delinquent hanging out with an idiot friend who’s nearly the complete opposite of him (Youhei Sunohara). At first Tomoya meets a shy girl, Nagisa Furukawa, at the bottom of the hill that goes to school and starts to help her establish a drama club at school, and just so you know, this is nothing like Tsuyokiss – Cool×Sweet.

The story proceeds as Tomoya helps her and meets other girls along the way and helps them with their problems. He already knows Kyou and Ryou the Fujibayashi twins and not much happens between them. They first encounter Fuuko Ibuki and helped her encourage her sister to get married and live a happy life. Then they meet Kotomi Ichinose and help her get friends instead of staying in the library all day. But then after Kotomi has an emotional breakdown, Tomoya helps her overcome her past trauma and we also discover a bit of his past. Then they meet Tomoyo Sakagami and help her become the student council president which enables her to help Nagisa with her club. Around the middle of the series the girls who actually fall in love with Tomoya realise who he actually likes and are disappointed even though they already knew it. The story ends when Nagisa re-establishes the drama club and puts on a play and Tomoya finally asks her out. 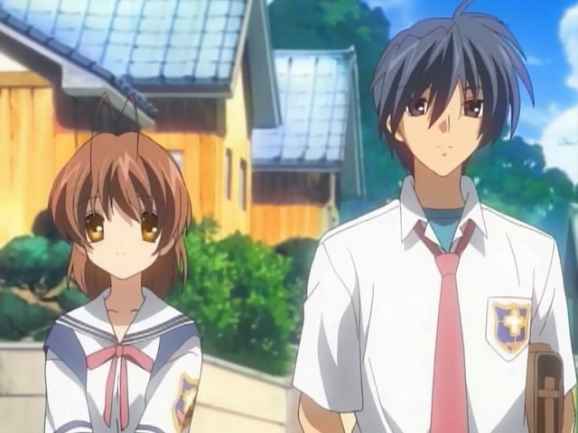 The crucial points that make up Clannad are the supernatural parts which were very mysterious and which in turn tells a unique story. The moe factor, which wasn’t unrealistic, attracts a lot of male audiences to the anime. Of course the emotionally gripping and funny storyline was entertaining too, to say the least. And the fact that everyone was connected to the overall theme of the series, family, gave it a lovingly warm feel. The ending sequence was named Daikazoku translating to Big Family, highlighting the theme.

This was an emotional story with a nice theme and many unique elements.

Posted on Nov 11, 2012 by
Lucretia Arkwright
Hi everyone, I'm 22 and got a fair bit of free time for now so I use it all to do what I enjoy and that's writing. Mainly blogging, and time I have left goes into anime.
Follow

Violence in Anime: Helpful or a Hindrance?
What makes an anime/manga popular? How does it get into the mainstream?
Analyzing The Concept of Unforgiveness in Hell Girl
The role of fillers in anime: Is there a way around them?
What is in an anime opening?
Black, White, & Colour in Star Wars Visions
Portrayals of Gender in Studio Ghibli Films