Cosmopolis Review: Cronenberg puts Robert Pattinson’s bulbous jaw through its paces by having him talk…a lot. 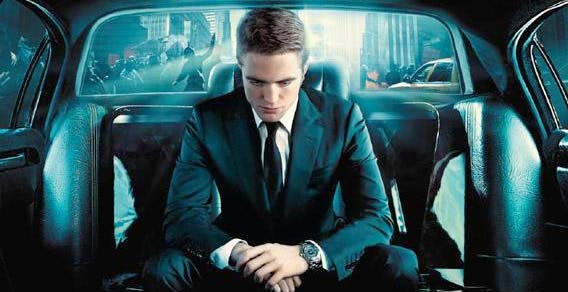 Recently, I had a good, long think about my favourite films. Not of the year, not of the decade; but the all-timers, the ones that have stayed with me. I’m still a pretty young guy (thirty is still a good few years off), so a lot of the stuff that has “stayed with me” is still fairly recent material. Sure, I love the classics, but most of my favourites were made in the last twenty to twenty-five years. A recurring attribute amongst my preferred films is a lot of solid, relevant, on-the-money dialogue. That quality comes in many different forms. Whether it be the nerd-rage of Jesse Eisenberg in The Social Network (“I think if your clients want to sit on my shoulders and call themselves tall, they have the right to give it a try”) or the rat-a-tat of good ol’ Tartantino, I just can’t get enough of words. Words smashed together and spat out machine-gun fire-like, words delicately timed and uttered perfectly for maximum devastation; I love them.

I suppose you’re wondering why the hell I’m telling you all this in a review for Cosmopolis. Maybe you’re thinking “just get to the review already!” Maybe you’re even thinking “if he loves words so much, he should just go tongue a dictionary”. I’m afraid I’ll be doing nothing of the sort, so my Oxford English volume can relax…for now.  The reason I’ve spent the time to tell you just how much I love a good dialogue-heavy film is this: Cosmopolis has a lot of dialogue, and I mean a lot. I tell you because I wish to assure you that I’m not a person that would inherently dislike a film for being too wordy. I’m not a “less talky more shooty” kind of guy, even though I do love a lot of action movies. So believe me when I tell you: I wish Cosmopolis would have shut-up for just three seconds and let my brain get a word in.

Here’s the plot: Robert Pattinson plays Eric Packer, a very wealthy young manager who decides to take a limo ride across the city to get a haircut. Along the way he meets a plethora of overly-verbose characters who seem hell-bent on challenging everything he thinks he knows. On paper, that plot really pulled me in. As I said, I love it when I see a movie where top-drawer talent like Paul Giamatti and Juliette Binoche get to give some good talk. However this film is 100+ minutes of every single character banging on about money, information, society and God-knows whatever else. To put this into an even sharper perspective: I do not consider myself to be stupid. I can understand what the characters are getting at, it’s just that they go on so much that I just stopped caring after about half an hour.

I really did want to like this film. The way in which the dialogue is delivered is convincing and you can really see the actors are enjoying the material. However, the words never stirred any passion or connection within me. I felt like I was being talked at by a gang of two-bit pontificators, seemingly hell-bent on making me want to forget the English language and learn a new one instead – just to I didn’t have to try to understand/listen any longer. I have, in the past, gladly sat through several hour-long lectures on some very heavy philosophical topics. I find enjoyment in knowledge and the exploration of the metaphysical and blah blah blah, but I found Cosmopolis to be too much. 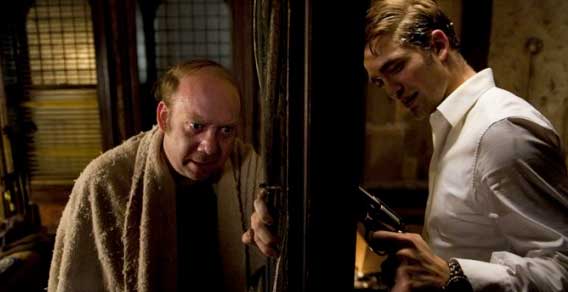 It’s not all bad though. If it wasn’t trying to impose its will so aggressively, Cosmopolis could get away with being a sleek, cerebral thriller of sorts. The understated Sci-fi elements are also a neat touch, giving the film a very eerie twist on what we see around us. There is even one scene where the heavy dialogue works (the final one, frustratingly). Paul Giamatti elevates the material beyond its coldness, and gives some warmth and pathos to a man crushed by the system, allowing for his confrontation with a confident Pattinson to have some real gravitas. The music (Howard Shore and Metric) is also worth a mention, as it perfectly reflects the film’s calculated frostiness and actually goes some way to redeeming this trying, borderline diatribe.

The film is “adapted” from the book of the same name by literary demi-god Don DeLillo, and both the film and book have received very mixed reviews. I felt that for all its insistences about the world, Cosmopolis was very detached from it. For all I know, said detachment could be deliberate; a scathing commentary on how those who define the world aren’t close enough to say anything worthwhile about it. I’m very much willing to accept that I may have missed something here and, who knows, maybe I’ll watch it again somewhere down the line and feel differently about it. At one point in the film, Pattinson’s character is given a rectal exam in his limo by a doctor. I feel like my brain has had a rectal exam after watching this movie.

Posted on Nov 28, 2012 by
David Tatlow
You can call me Tatt. I like all kinds of films, as well as talking to/boring people about them at great length, so brace yourself.
Follow