Deadpool #2 Review: We Fought A Zoo 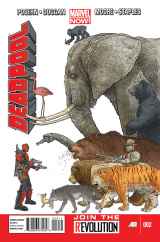 Deadpool #2 picks up directly where the last issue left off: a bullet in Deadpool’s skull courtesy of the 16th President of the United States of America Abraham Lincoln. Well to be accurate it was actually zombie Abraham Lincoln. The issue begins with a fantasy sequence that has Deadpool relaxing on a beach with numerous female Marvel characters fighting over him. It’s probably the funniest few pages to be featured so far in this runs two issues, and it had me in hysterics! As a result of his healing factor, he recovers and wakes up to the presence of the ghost of Benjamin Franklin. Now we all know Deadpool is utterly insane and has a history of talking to himself, so it’s not exactly known whether he’s actually speaking to a ghost or it’s all in his head. The undead Presidents continue to wreak havoc and S.H.I.E.L.D. is growing increasingly nervous as the situation begins to spiral out of control, but there’s one particular President causing maybe a little too much damage. They discover that Theodore Roosevelt has taken up one of his favorite past times of big-game hunting at a Los Angeles zoo, so with Benjamin Franklin at his side, Deadpool goes to put an end to the massacre. This leads to lots of funny one liners and Looney Tunes style hijinks, that results in a satisfying conclusion.

Now that issue #2 is out, we start to get a feel for what writers Brian Posehn and Gerry Duggan are doing with the character. I cited in my Deadpool #1 review that it seemed they weren’t entirely comfortable with the character at the time of that issue’s release, but you can see in this new issue that they’re starting to finally settle in but aren’t quite there yet. They have him saying really funny things, but that’s not going to be enough as they move forward. They still aren’t featuring key Deadpool traits, such as him breaking the fourth wall and conversations with his many consciousnesses. Also I’m finding this run to be a little tamed compared to past Deadpool stories. Now I don’t condone needless killing, but this is part of his character and this aspect really hasn’t reared its ugly head yet. Posehn and Duggan still have time to rectify this, and I believe they’re very capable of it. I’m just finding it to be a little too much PG-13, not enough R. With those criticisms put aside, the humor is there and the story continues to be strong. 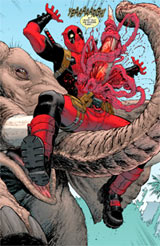 Once again though, Tony Moore proves to be the star. That can either be a good thing or a bad thing depending who you are. If you’re a fan of The Walking Dead artist, then you’ll be pleased to hear that his art is very sharp and detailed. He again shines in the gory moments, especially when Deadpool gets impaled by an elephant. I might sound weird saying this, but it’s a beautiful piece of art. I also love how vibrant the color palette continues to be and the art just pops off the page. Now the negative side to Moore’s art being so damn excellent is so far he’s shining over Deadpool himself. Posehn and Duggan can easily fix this problem, and while they have been doing a good job so far, they haven’t wowed me yet like past writers have with the character.

Deadpool #2 continues the strong story arc established in issue #1, and supplies us with many ridiculous situations and hilarious bits. While the important character traits of Deadpool are still missing in action, Posehn and Duggan are starting to show that they’re getting comfortable writing the character and exhibiting some familiarity with him. Tony Moore continues to dish out some fantastic art and is a huge reason why you should check out this series. There’s still much room for improvement, but I think they’re on the right track to making their version of Deadpool memorable.

Posted on Dec 6, 2012 by
Mike G
I'm an absolute film buff, and love writing about movies and TV. I'm particularly a fan of Asian cinema and hope to introduce people to truly great films from that region.
Follow