Cultural Commentary and Genre in ‘Defiance’

The sci-fi and western hybrid series Defiance, having recently wrapped its first season on Syfy network in the US (and confirmed for a second), leverages facets of both genres to explore sensitive contemporary issues. Through the frame of human/alien interaction, it explores the complexities of differing cultures living side-by-side. Replacing known cultural groups with humanoid extra-terrestrials – ethereal, Legolas-like Castithans, the scaled and silver-blooded Indogene, and what are basically over-sized orangutans – diminishes pre-existing concepts of race and culture, giving the show’s writers a ‘clean slate’ to explore some challenging themes.

In this way it’s reminiscent of the 2009 film District 9 which depicted a mass of insect-like aliens stranded in a ghetto in Johannesburg. To engender a sense of reality, director Neill Blomkamp included interviews with real people and their confronting opinions towards actual refugees living in Johannesburg’s ghettos.

Defiance explores the challenges faced by (in this case, burgeoning) pluralist societies. It does this using various humanoid alien races, referred to collectively as the Votan, stranded on earth after fleeing their destroyed solar system. Of the various cultural groups, the Irathients – the most ‘outsider’ of the Votan races – experience a higher degree of prejudice from both fellow Votans and humans: from racial slurs to acts of violence.

This is evident in the ninth episode If Ever I Leave This World Alive, in which Irathients are presumed to be the vectors of a disease deadly only to humans. Subsequently, the Irathients experience a storm of racial abuse. They’re labelled unhygienic and likened to rats, and then imprisoned in a mining tunnel – an act rendered redundant as the group was already quarantined in their remote encampment. Finally, while imprisoned in the tunnels, an Irathient is shot for refusing to cease a traditional dance. This episode encourages us to view discrimination as unnecessary and destructive. It highlights the existence of choice: it’s not necessary to treat the Irathients in this manner. It also explores the idea that by characterising a group as inhuman, savage and unclean, then treating them as such; the group is given no choice other than to act in this manner ascribed to them.

Cultural conflicts also arise in the second episode, Down to the Ground Where the Dead Men Go, in which a Castithan willingly participates in a ‘cleansing ritual’ which, to an Irathient observer, more closely resembles torture. The episode proceeds to negotiate the point at which law should intercede in matters of cultural practice; mirroring a number of similar modern narratives, such as female circumcision.

Defiance also leverages western genre conventions to explore cultural friction. For example, episode three, The Devil in the Dark, employs the traditionally-western binary of homesteader/rancher to explore the story of a family of Iratheint subsistence farmers, murdered for their land by a ruthless mining company. With the subtraction of red-headed aliens and the addition of buckskin-and-chambray, his storyline could be lifted from George Stevens’ 1953 western Shane – both texts similarly explore the struggles of homesteaders against cattle ranchers as a powerful ‘other’. 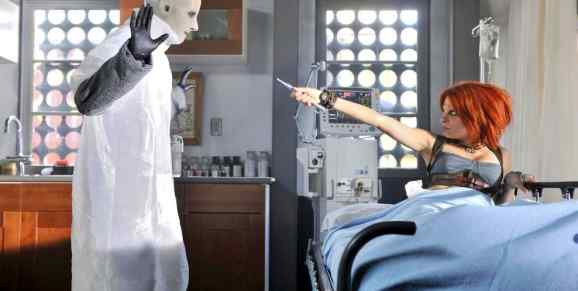 In the western tradition, Defiance looks at colonialism in terms of East-v-West and territory-v-federation binaries. The inter-species government based in New York known as the Earth Republic represents the genre’s East: offering order, safety and civilisation, with a hint of corruption and demands of subservience. The township of ‘Defiance’, which gives the show its name, represents the genre’s West: characterised as savage, chaotic and primitive, but also authentic and free. The Defiance/Earth Republic relationship mirrors the relationship between territories and the United States seen in traditional westerns, symptomatic of the United States’ sometimes uneasy relationship with federation.

Another common colonisation binary in westerns is that of the Native American/European or native/introduced. Votan races are represented as exotic, displaced people whose cultural practices are not always understood by humans and/or fellow Votans (often both). The Irathients in particular are endowed with a mystical quality, some possessing supernatural abilities. In this way, Votans, and specifically the Irathients, serve a similar role to that of Native Americans in westerns. This said, humans – quite literally the native inhabitants of Earth – operate alternatively in this role.

But the western genre does not have a monopoly on exploring these themes – as a genre, sci-fi often deals with the theme of colonisation, usually in the guise of humans or aliens colonising (often inhabited) planets. The ultimate act of colonisation takes place in Defiance as the earth itself is terraformed by alien technology, reminiscent of the European’s transformation of the new world through agricultural practices and the introduction of exotic species as represented in Westerns. In many countries, the implications of colonisation are still at the forefront of public consciousness, and once again, by stripping away cultural preconceptions, western and sci-fi genres allow a conversation to take place in abstraction.

By leveraging facets of western and sci-fi genres, Defiance explores sensitive contemporary issues of colonisation and pluralism. Through the sci-fi specific device of ‘aliens’, the complexities of pluralist cultures are explored, while western genre binaries are correspondingly used to explore cultural conflict and the implications of colonisation. Wrapping these themes in genre makes them more accessible, ensuring a larger audience than if the text simply depicted modern instances of cultural friction and colonialist fallout. In this way, the fantasy of sci-fi and western genres makes difficult, challenging or off-putting concepts more palatable, enabling writers to engage a casual audience ­– a ‘spoon full of sugar’ to complement grim cultural commentary.

Posted on Aug 4, 2013 by
Rebecca Wildermuth
A marketing and screen research major based in Brisbane, Australia, Rebecca writes about pop culture, including genre, style and industrial factors of film and TV.
Follow