End Of Watch Review: The best LA crime film since The Shield turned in its badge 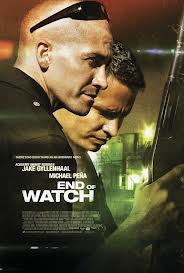 Judging by its trailer the recent vérité crime document End Of Watch seems to answer the unexpressed question – what would happen if you collided the exasperatingly popular found footage narrative technique with a contemporary West Coast crime drama? Taking this increasingly ubiquitous movement the film also arrests that long standing genre convention – the buddy cop movie – which has a long if not necessarily distinguished history in American genre cinema. Deviating from the squalid urban realism of The French Connection and Serpico in the 1970’s the subsequent decade saw a seizure of bromance with a badge, from the mismatched racial pairings in the Lethal Weapon and 48hrs series, before the sub-genre plundered political and personality boundaries with Red Heat and Tango & Cash before finding its nadir with cross species perversions in the likes of Turner & Hooch and K-9 –  isn’t it strange that we never saw that most unconventional of pairings, an efficient female law enforcement officer who wasn’t one of those bleeding heart liberal DA’s or defence counsels?

In End Of Watch we have a return to the racial melange with Brian Taylor (Jake Glyeenthall) an Iraq veteran twinned with his teasing partner Mike Zavala (Michael Peña) as two adrenaline pumped beat cops, prowling the notorious South Central mean streets of the City Of Angels, under a pulsing sun and cacophonous mix of Mexican rap, speed metal and thundering techno. Taylor is constructing a video diary for some ill explained educational project, the premise of a shaky-cam, deliriously shuddered filming style established early before retreating to a invisible distance, as our hero Butch & Sundance uncover a wider conspiracy through their routine day-to-day responsibilities, twinned with fragments of their home-life with Zavala expecting his first child with his teenage sweetheart Gabby (Natalie Martinez) and Brian forging a hesitant romance with his new girlfriend Janet (Anna Kendrick) who offers him more of an intellectual rival than the fuck-buddies he’s recently been bedding.

In this hard boiled assignment director David Ayer, the scribe of the award winning Training Day and unappreciated Dark Blue follows up the 2008 LAPD criminal drama Street Kings with his most successful case yet, as something of a previous protege of the urban cinema of Michael Mann he seems to have finally been promoted to the big league with the pen pushers down at City Hall. The found footage gimmick whilst initially distracting becomes an effective feature of the films bruising tempo, it is unquestionably a little unwieldy and clumsy in the opening scenes but once the film finds its legs it gives critics the slip as the gruesome conspiracy comes to the fore. It’s to the films credit that the overarching criminal syndicate is uncovered by accident through our protagonists common duties, it’s through sheer coincidence rather than any superheroic antics of any larger than life lawmen that the Sinola cartels numbing brutality is exposed in all its Dantesque elegance, an alignment of procedures that if overruled could have neutralised the films central conceit of an immediate and arresting credibility.

The oft quoted exploration and comparison of the institutions and organisations that function on both sides of the law (a favoured technique in the filmmakers arsenal when tackling such material) finds new proficiency here, with the characters firmly asserting their masculinity and cursing like Tourette suffering dockers, comparing the ferocity of their jailhouse tatts, impressing their colleagues and comrades with brutal recollections of gunfights and massacres, presenting their testosterone saturated plumage with growls and barks, a savage display of machismo and masculinity – and that’s just the women. The racial miasma, the melting pot of contemporary Los Angeles is vividly evoked on the sun bleached sidewalks, with casual racial slurs equally distributed between the cops and robbers, a realistic urban argot populated with slang and argot mutated from the likes of Iraq (‘light ’em up’) to a homeland battlefield replete with gold embalmed AK47’s, lethal firepower and a hostile population trained in the use of heavy ordinance. There’s a solid camaraderie between the leads and one imagines that this has the compact aura that the James Ellroy scribed Rampart wanted to achieve, but failed to achieve with its floating, unspecific articulations. As the wider picture becomes exposed the film turns down some wrenching dark alleys, culminating in a frantic confrontation which prompts a stunned silence which tags End OF Watch as the best LA crime film since The Shield turned in its badge, an unexpected treat that demands to be apprehended.

Posted on Dec 1, 2012 by
John McEntee
Based in London John makes the most of the celluloid capital of UK by attending as many BFI and art cinema related events as possible as well as the LFF every year.
Follow