Could ‘Geordie Shore’ And ‘Made in Chelsea’ Be Impacting On The Way We View Social Class?

Growing up as a teenager in the noughties, I’ve watched my fair share of reality television. Though I cannot call myself an avid watcher or a fan of the likes of The X Factor or Big Brother, I’ve seen enough of it to understand just how this genre of television works. Reality television has become a popular culture phenomenon in modern day society. It’s very rare we find ourselves with a night without it, or a magazine or day time television show without a reality contestant featured. It’s become a culture people aspire to be a part of, an easy access to catapult themselves to a life of celebrity and stardom. This appears to be the main attraction of reality television. The fifteen minutes of fame it brings to ‘normal everyday people’ that is so inviting.

Being from the north east of England as soon as I heard MTV were remaking America’s Jersey Shore for a British audience, least of all in the place where I’m from, was not the best idea I’d heard of. Geordie Shore exploded onto our screens in 2011 on MTV and is now onto its sixth series. It appeared to become popular for all the wrong reasons, representing an extremely exaggerated Geordie stereotype. The first series showed the eight over the top Geordies drinking alcohol frequently and excessively, getting tanned, ‘pulling’ numerous ‘ birds’ and fighting and shouting amongst each other. Some of the castmates even had catchphrases, some being pieces of literature gold such as ‘I should have a degree in pulling women’ or ‘I would never kiss anyone without a six-pack’. I have watched the odd episode just to see how my town was being represented, needless to say I didn’t enjoy what I was seeing. To me, it was all the worst parts of the Geordie stereotype compacted which was then shown to audiences. 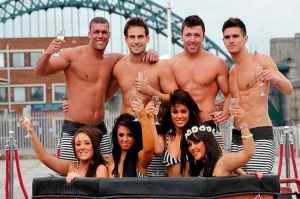 Geordie Shore is a negative and exaggerated representation of the northern stereotype. It represents the cast as ‘idiots’ who are only good for getting drunk, partying and having sex. This is all shown very clearly to the audience watching which then impacts onto ideologies. The show represents an extremely exaggerated version of what people from Newcastle actually act or even look like. Audiences find themselves watching these people in fascination and then perhaps even recoiling in horror to. Perhaps audiences watch this programme just to show they are ‘better’ than those they are viewing. This seems to be a new pulling point to get people to watch reality television. The second hand embarrassment we feel while watching these kinds of television shows has almost become an appeal to watch. The people featured are largely there to be laughed at and ridiculed by the audience.

This brings me onto the topic of how class can be represented in reality television. Though these people were clearly not ‘poor’ or typically appearing to be ‘working class’, the north east still has this stereotype and notion of being a fundamentally working class area. The Geordie accent is also mostly related to working class lifestyles. Stereotypically, most people who think of Geordies think of the working class and the lifestyle that comes with it. Alcohol and drunkenness is also sometimes linked more to the working class over other social classes and this is a key theme in Geordie Shore

Continuing this theme of social class, there is also the representation of the upper classes in reality television. Geordie Shore is a polar opposite to E4’s Made in Chelsea. It’s onto its fifth series and also just won a BAFTA from the people’s choice category, showing the power and popularity of this television show. Made in Chelsea is set in London, in one of the poshest and richest areas and shows the problems of the young people who live there. It shows superiority and class, making it a complete contrast to Geordie Shore. You’ll not find any scenes of people vomiting after drinking themselves silly here. There is a certain classiness and pride attached to it to show the middle and upper class lifestyle.

But both television shows are massively different in their representations of their castmates. Made in Chelsea’s cast are much more sophisticated and well spoken compared to those on Geordie Shore. Both shows feature people around the same age and mostly show relationship problems. They fundamentally represent the same issues. But they represent exaggerated stereotypes from the north and south, which only broadens and impacts onto audience’s ideologies. Though London does have a large population of working class people, the Made in Chelsea lifestyle and ideology makes London look like a largely middle and upper class area, thus furthering the divide between the north and south. People are being impacted on to believe that these representations are real and true, when in fact the scenarios the cast find themselves in or what they say are mostly made up for the audiences own entertainment.

From the way they are both directed is also interesting and shows what could even be the British north and south divide happening in front of our very eyes. They have connotations to show their working and upper class lifestyles. Geordie Shore is shot similarly to Big Brother with numerous cameras following their every move. The cast also live together in a large house. Big Brother is even narrated by a man with a Geordie accent. They have interviews showing how they really feel about the people they are living with. They excessively swear and use northern slang, we see them drink, have sex and party. Geordie Shore appears to be a documentary on the stereotypical Geordie and northern working class lifestyle. Made in Chelsea appears more like a scripted soap opera, with people ‘unexpectedly’ appearing out of nowhere in the same scene as another person to create an awkward atmosphere. There are long pauses of people just glancing blandly at each other very dramatically. They also are suddenly able to jet off around the world without a moment’s notice, showing the amount of money and power they obtain. 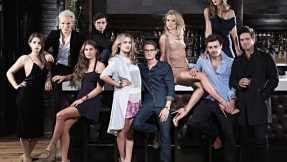 Made in Chelsea is shot with more elegance, grace and with beautiful shots of London. There also seems to be a running theme of the colour white intended to show the cleanness of Chelsea and other London areas. This could even help to connote the cleanness and superiority of the upper classes. There is a more intentional gracious and stylish atmosphere created. Whereas Geordie Shore shows its castmates rolling around the floor in drunkenness, partying in numerous clubs playing the lastest overbearing dance music. I believe these two television shows represent the north negatively, and the south in a more positive manner. Geordie Shore is much more up front and vulgar. Made in Chelsea is more sophisticated and tame. These could be argued to be the stereotypical north and south representations we have been impacted on through the media repeatedly.

To me, reality television has a great amount of power over its audiences. Reality TV helps create ideas of people, classes, and the areas they are set in. It has an ability to show a certain lifestyle for either positive or negative reasons. Reality television is supposed to represent realism, yet it shows a small minority of people from these areas who actually behave like this for the cameras and for the celebrity lifestyle they want to obtain. These reality television shows, and many others, represent the exaggerated stereotypes and way of life from these different regions and social classes. This then can impact dramatically on how people view these areas. They become the only image people see of these representations and regions. We need to pay more attention to what is happening onscreen to see the real issues being represented. Reality television must be taken seriously to understand what kind of society we are creating around us through our media consumption. We have to notice the kind of themes we are watching which are able to impact onto our own ideologies. In conclusion, reality television is able to not only be a form of entertainment, but also a way to create powerful ideologies of social classes like never before. It has a significant power over our own ideas and ultimately our views of social classes.

Posted on Jul 19, 2013 by
Georgia
Film and media graduate trying to find her way in the world.
Follow