On November 20th, Netflix released their second Marvel program, Jessica Jones. Jessica Jones is based off the Brian Michael Bendis’ Alias comic series. Marvel took a risk when they bought the rights to characters like Daredevil and Jessica Jones who are not that well-known to casual fans. They knew that a very little demographic of their audience would have read the comics before, so they couldn’t approach it with the same expectations that could be applied to Avengers or Spider-Man movies. With these realistic superheroes, Netflix has had a lot of freedom, and a lot of opportunities to mess up. Not only is Netflix’s Jessica Jones a realistic and relatable super hero show, Jessica herself is a relatable and realistic female character.

Who is Jessica Jones?

Jessica Jones was created by writer Brian Michael Bendis and artist Michael Gaydos, who introduced her to the world as the star of a monthly comics series called Alias. At the time, Marvel Comics was undergoing a massive overhaul of its creative strategy, and one element of that overhaul was a project called MAX. The MAX line consisted of series that rejected decades of self-censorship in its featuring of sex, profanity and graphic violence. Alias had all these in spades. Indeed, the dialogue on the first page of the first issue famously consists of a man yelling swears, and that same issue features Jessica having extremely rough, doggie-style sex (the nudity is minimal).

The series, however, caught on not because it was raunchy, but because it starred a well-rounded lead with a fresh perspective on the Marvel universe. We were told she had once been a minor costumed hero going by the nom de guerre Jewel, and that she’d given it up to live like a normal civilian. That left us with something rare in the superhero genre: a lead who has powers but doesn’t use them to punch extra dimensional gods or foil schemes to take over the city. Instead she uses her powers sparingly during her efforts to solve her clients’ non-punchable problems, like infidelity and blackmail. But because she does have powers and did pal around with Avengers, she had all kinds of nasty and cheeky things to say about the way powerful people can mess up the daily lives of the powerless. Bendis loves writing crime fiction and satire, and Jessica allowed him to deploy both.

Jessica and Alias were pretty revolutionary in another respect: It was (and is) extremely rare to see superhero comics starring deeply imperfect women who aren’t defined by their relationships to men. Super heroines tend to be eye candy, bait for villains, hyper-competent goddesses, or adorable goofs. Jessica was a casually dressed, wholly independent, substance-abusing train wreck. Marvel had never featured anything quite like her.

When Netflix announced that they were going to be deploying another street level superhero, fans were ecstatic, especially after watching Netflix nail Daredevil. However, many were worried when they announced that the next superhero was Jessica Jones, and took several steps back. Jessica Jones is a character that one can’t just ‘do’. She is a troubled and conflicted character who has no filter and is more of an anti-hero than viewers are used to. Her story is something you cannot water down and push aside. Her ‘relationship’ with her villain is twisted and psychologically disturbing.  Worries were put to rest as viewers watched the first season of Jessica Jones. Netflix delivered, and they delivered well.

Netflix Marvel shows have a very grim and dark feel to them. The characters of Daredevil and Jessica Jones live in a realistic world that just happens to have people with powers, as opposed to a world that is built around super heroism. It is targeted towards an older, and more mature audience. Jessica Jones is not a show for kids – it’s full of violence, blood, swearing, sex scenes and problematic topics. And that’s what makes it so good.

Krysten Ritter delivers an outstanding performance as Jessica Jones; right from episode one, she completely owns the character. Throughout the series we explore Jessica’s life, from her relationship with Killgrave, all the way back to her family life and its tragic end. The more of Jones’s past that is explored throughout the series, the more Jessica comes to life and the easier it is to root for her. Although she is a character who, for the most part, is dismissive and disconnected from the world, Jessica Jones still makes it hard at the very least to not enjoy her presence when she is on screen. She is not your run-of-the-mill hero; she does many questionable things all throughout the series and that’s one of the many reasons she’s so relatable.

However, a hero is only as good as their villain. So it’s a good thing that David Tennant also knocks it out of the park as the devilish and devious Killgrave. In the same style as Daredevil, Jessica Jones produces a villain who is well-developed and given a powerful back story. Killgrave is, in a lot of ways, relatable, while also doing things that’d make most sick to their stomachs. Whenever Killgrave is on screen, you love watching him but you also want to punch him in the mouth. Killgrave is one of those villains who is more terrifying on the screen when off, in which you see the effects of his mind control in other characters, especially Jessica. Especially when he’s trying to be nice, because it just emphasizes how utterly sociopathic and morally blank he is.

Killgrave is an unapologetic rapist and the horrors that he inflicts upon women in this series is meant to be horrific, not the deeds of a morally grey character, like Kingpin from Daredevil. Killgrave has no redeeming qualities; he is an abuser, rapist, and a murderer. Jessica struggles to maintain a sense of ‘self’ after being suffocated by Killgrave’s mind control. Her struggles show the extent to which a predator can alter how one views oneself and others, and how toxic individuals will sometimes use one’s compassion to their selfish advantage. Jessica Jones is a story about a rape victim and her drive to stop other people from experiencing the mental and emotional abuse she has endured, and that is empowering.

Female Friendships in Jessica Jones and the Bechdel Test 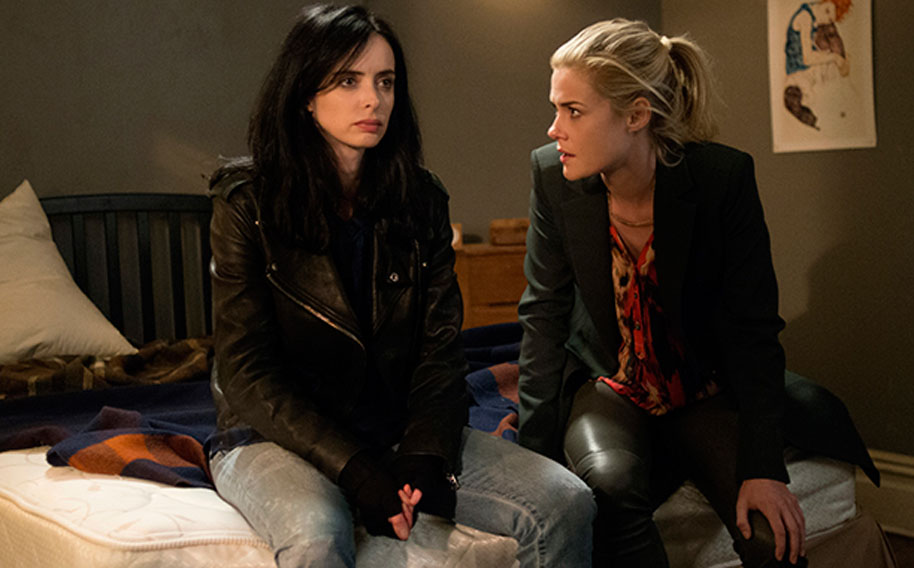 Throughout the 13-episode season, the biggest relationship explored is the one between Jessica Jones and her best friend, Trish. Meeting as children, the two overcame Jessica learning to cope with her abilities while Trish grappled with her psychotic stage mother who only saw her daughter as a cash-cow. Together, they grew into women and despite how much they bicker, the central focus of the story is on them and how their relationship weaves in and out of the danger that threatens to engulf them.

The series focuses on the idea of love and who can and who can’t feel it for another person. Sure, Jessica has sex with men and eventually catches feelings for another character but the biggest relationship throughout the season is the one between its two lead women. Throughout the season the only person Jessica is consistently concerned with protecting is Trish. Despite Trish being more than capable of defending herself, the two women play to each other’s strengths when the time comes to fight. When Jessica is given the option between her own happiness, and keeping Trish safe, she puts her friend’s needs above her own.

The Bechdel Test is one that is often used when talking about a piece of work and whether or not it is intrinsically feminist. The test asks films three questions to determine whether they’re feminist: are there more than two female characters, do they speak to one another? and do they talk about something other than a man?

While it may not be prudent to hold a television show to a test like this (there are 13 hours in this season, as opposed to film’s often 2 hour run time) but it was not surprising to find that every episode in Jessica Jones passed the test. As simple as it may seem to pass the Bechdel Test, very few films do.Without spoiling anything for those who haven’t watched yet, there is only one “I love you,” exchanged between characters that matters-and it’s when Jessica tells Trish she loves her.

Why is Jessica Jones so Important?

In a very male-centric cinematic and comic universe, it is refreshing to see a female character getting her time to shine. From Scarlett Johansson’s Black Widow, Gal Gadot’s Wonder Woman, Melissa Benoist’s Super Girl, and the yet to be cast Captain Marvel, the next couple years for women in comic book movies, is going to be breaking. Jessica Jones has set the precedent for female superheroes, showing that yes, female superheroes can be as popular and bankable as their male counterparts if they are given equally substantiate story-lines with gravitas. The Muse’s Stassa Edwards talks about Jessica Jones’s appeal and fight for women in the midst of being controlled and powerless by their abuser in the article titled, “Netflix’s Jessica Jones Is a Complex Portrait of a Woman Undone”:

If Jessica Jones is a feminist show, as many critics have said that it is, it’s not simply because it presents a complicated woman, but rather because it understands how strength and control play out in the lives of women. And it explores that with a depth and sensitivity that’s rare for television and even rarer for its genre. Jessica Jones doesn’t shy from away from rape or its aftermath, and it’s unafraid to confront the trauma and victimization of the protagonist without falling into a pit of bad stereotypes. There’s no perfect way to handle the casual brutality the show depicts, but Jones’s navigation of that is a mythical presentation of something all too familiar: the often invisible, adversarial forces that operate in the lives of everyday women.

With positive reviews coming left and right, Jessica Jones has put itself on the Marvel Mantel next to Daredevil for gritty, realistic, and action-packed television. It feels absurd to have to praise a show for treating women as regular human beings who can have lives and relationships and friendships that are written and performed as straightforwardly and normally as male characters’ are treated in other productions. But that’s the world we live in, where it’s supposedly somehow harder to create good, relatable female characters — particularly lead female characters — as if the “trick” isn’t to simply write them as regular people like anybody else, treating them with dignity and respect and unique goals and desires and expectations.