Katekyo Hitman Reborn! Review: The struggle of a young man and the hitman baby 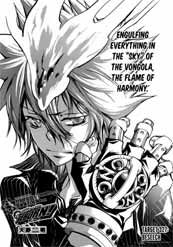 Synopsis: Nowadays, the mafia world is ruled by Italy’s strongest family, the Vongola. Vongola’s current head, ninth in the row, is an old man ready for retirement. But before he can hand down his position, he needs help from a professional Hit-man to prepare the next generation Boss for ruling over Vongola and the mafia world itself.

Sawada Tsunayoshi is just your ordinary teenage boy who attends Junior High and sucks at it. He is unpopular, has no friends and is desperately in love with a girl from his class. But his life takes an extraordinary turn when Tsunayoshi meets Reborn, an infamous hit-man,  who has been sent by ninth boss of Vongola to train Tsunayoshi for his upcoming title.

Review: What would you do if a talking baby, who claims he is from the Italian mafia, came to your house and told you that you are the next in line to be the boss? I would personally say yes, but this is not a story about me, but about Tsuna. I will not lie to any of my readers that the beginning 40 or so chapters were beyond boring and the same repetitive antics in every single chapter. I was in it for the long haul. I started reading this manga a couple months ago and I was looking for another shounen manga to read. Around the time of the Kokuyo Arc the manga changes from a comedy to more action-filled as the students of Tsuna’s high school are being attacked. This is where the manga actually pays off for the reader; it gets intense and brings the reader back for more. I was sad to hear that this manga ended because I thought it had a lot more story to build off of. I will not spoil anything for my readers but I was just wishing for more of the ending.

Posted on Nov 16, 2012 by
Takyoura
I am a soccer player on injury leave while recuperating from my ACL surgery. I am a Graphic Design student and I am an aspiring author, artist. I love manga, books and anime
Follow