Innocence and Violence in the Slums of La Haine 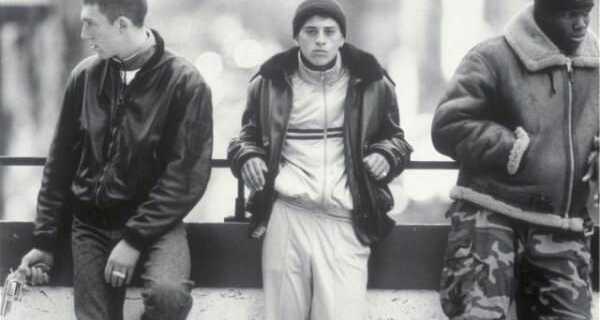 One of the more striking aspects of the “hood” or banlieue film, La Haine (literally, “the hate”), is the choice of protagonists. This could be a procedural about the French police force’s endless crusade against crime in the suburbs around Paris. This could be an investigative journalist’s moment to expose the lies about the despair of the mostly displaced refugee communities outside of the city, Spotlight style, with all the glam and glitz of All the President’s Men. Yet, it’s three ordinary boys living the slums near Paris who take the stage in the film. Vinz, Hubert, and Said lead the viewer through the ups and downs of what seem to be a relatively normal day in the projects.

Sometimes, shootouts should be left to the Wild West

La Haine has its moments of physical violence. There’s the less than gentle hassles with the police as well as the torture in the police offices. There’s the fight with the skinheads in the street, where Hubert and Said are beaten by maniacs. There’s the dark moment where the policeman kills Vinz. Then, there is the retaliation by Hubert, revolver in hand. Each of these scenes is brutal, but lack the Michael Bay flair of loud explosions and death defying stunts. The only stunt is the struggle to survive.

However, what is most striking about this film is the psychological violence done to the boys. The suspicion of others causes them to be doubly careful. The rejection by the people around them isolate them. There is no escape from the violence in the streets, in the mind, and in the eyes of others. It seeps through the boys’ identities and lives. There are no shootouts or last stands. There’s no need for special effects. Sometimes the power of understatement is what it takes to point out something so egregious that it would be far better if it weren’t true. The violence in La Haine doesn’t need special effects to prove a point.

The color of the streets is black and white

Unlike most recent films in the same genre, La Haine is shot in black and white. One of the more immediate effects of the monochromatic choice of colors is the more serious tone of the film. It’s real, it’s happening, and people are dying. There’s nothing funny or glamorous about death. This is only one possible reason for the choice. One could look from a broader perspective and see that La Haine reflects an older tradition of shooting social realist dramas such as A Taste in Honey in black and white. As Kassovitz stated in an interview with The Guardian, “La Haine is about police brutality.”

The black and white add something to the architectural aspect of the film, which is set near Paris. It removes the romanticism of the City of Lights. Without the brilliance of colors normally associated with the famed city, something changes about its character. No longer are the streets catwalks for expensive jewelry and clothing. The windows lose their luminescence, and more importantly, the boys are in clear view, just wanderers in this bleak place. The color of the streets matches the way that the boys view their home, not a sanctuary or a shining beacon of culture, but a place of struggle and sharp divisions almost as distinctive as the colors black and white.

Boys will be boys until they have to face the police. Then, they will be punching bags.

Vinz would no doubt would be a fan of the handsome John-Waynesque cowboy of Westerns. His imitation of De Niro’s Travis Bickle is hilarious and sobering as he experiences the limitations of his idealistic views of masculinity. Said has a more fraternal view of masculinity, always wanting to be “in” with whatever the crowd has to say, whether it’s with Vinz and Hubert or Abdel, his idol. Hubert seems to have the most mature attitude, yet, his life is not without the consequences of violence.

This is not to say they are idiots. Rather, their unnatural ability to see through the structures of society is gained earlier than most. They, rightly, don’t trust anyone. The police can’t be trusted. The media just want to exploit the riots to increase ratings. There is constant rejection from high society in Paris, whether in the museum or in the street. There is no place for these boys in French society, and they know it.

The scenes with the police were undeniably hard to watch. Yet, would it really surprise anyone in France that two boys would be mistreated or attacked in the street by police? As Kassovitz’s film gained awards from the highest echelons of the cinematic world, he received constant criticism for being “anti-police”, going so far as to antagonize one of the most powerful people in France, President Sarkozy.

Violence is something that is often used in film, but not with the gravitas or skill of movies like La Haine. In most films, present action supersedes future consequence. Violence affects everything that happens to people in the suburbs, and it’s cost is staggering. “Hatred breeds hatred,” so Hubert says. When there is another shooting or stabbing in the slums of our own societies, one is left to wonder, how did we fail to see it coming? If one is to avoid such blindness, films like La Haine should be praised not put down. Alain Juppé had the right idea. If anything should be said about the film, it is that it is a film about mindfulness. We must remember that there are always children watching.

Posted on Mar 14, 2018 by
tedytak
Contributing writer for The Artifice.
Follow