Liberal Arts Review: How I met a girl young enough to be my daughter

Liberal Arts is the second writer/director/star multi-credit for How I Met Your Mother‘s Josh Radnor, and it is a confident step-up from his inconsistent debut feature Happythankyoumoreplease. Radnor stars as 35-year-old Jesse Fisher, a man stuck in a kind of high-functioning arrested development. He has just broken up with his girlfriend, and has been invited to speak at an old professor’s retirement dinner at Ohio University. Whilst there, he will meet people who will either help him regain his lust for life, or drag him deeper into disillusionment. He is confronted by a free-spirited young man, two of his favourite professors, a troubled outsider and an enticing love interest (of sorts). The moments that Jesse shares with this ramshackle group of characters form the crux of the film, with each connection between him and someone else seeming to address a different aspect of his character. 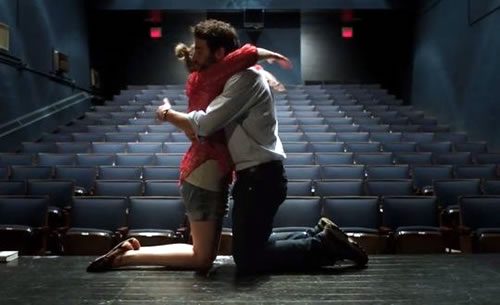 The most significant (read: focused-upon by the movie’s detractors) encounter is with Elizabeth Olsen’s precocious Zibby, a nineteen-year-old student with a penchant for classical music and trashy vampire fiction. The pair share an obvious connection, and it’s a credit to the performances of Radnor and Olsen that the nature of their attraction remains fluid for the most part. There isn’t really an extended period where respective intentions are clear on both sides, which is one of the strengths of Radnor’s script. He can sometimes stray into smug territory – an early, jokey proclamation of Jesse remembering himself as “handsome” in his college days aims for false cockiness, but winds up seeming forced. It’s not a common occurrence, and it’s the only real criticism that I can level at what is otherwise a very assured piece of work.

The performances are uniformly very good, with Allison Janney doing a very good impression of a frosty bitch who has become jaded with her position in life. Zac Efron also deserves a mention here, as he spreads his wings in a manner that actually gave me a laugh or two; it’s a good sign for his future that he can pull this sort of thing off.

As a leading man, Josh Radnor is still finding his feet. It can be difficult for many actors to completely emancipate themselves from a sitcom character that people recognise them for. It’s a big reason why we don’t see Matthew Perry in much else, despite the fact that he’s got some real talent. Most people look at the guy and think “Chandler Bing”. Radnor has suggested quite wittily that the difference between his movie work and his How I Met Your Mother day job is simply a beard, but he makes enough smart departures here to suggest that he has real potential for a post-TV career.

Liberal Arts has been criticised in some quarters for being a pathetic, wish-fulfillment fantasy for ageing males (I am paraphrasing a particularly moronic critic who writes for a tabloid in the UK, but he’s not the only one to suggest this). On the surface, and with some very lazy judgement, there are elements of such a film. Jesse meets a sexy nineteen-year-old who wants to have sex with him. Awesome, that’s all there is to it. Except, that’s not all there is to it. In fact, there are enough twists and turns here to make Liberal Arts a meditation on the state of the modern, overly-sensitive man who is approaching the big 4-oh. Such a character has become quite commonplace in the past decade, with Judd Apatow for example doing some fantastic work with his peripheral characters in Knocked Up and his leads in This is 40. It’s an archetype that stems from Woody Allen’s work in the 70’s and early 80’s, with his Alvy Singer proving an interesting foil to some of Radnor’s ideas and tics.

The film’s resolution is great. Ideas are neatly tied together, and whilst it may not go quite the way you expect, Liberal Arts satisfies on a realistic level that is at once grounded and life-affirming. It’s still early days for Radnor, and he is yet to truly settle down as a director, but he is smart and savvy enough in his writing to put together a solid film. His love for character and keen eye for chemistry make him one to watch. With more output of this quality, we could be looking at the next Woody Allen. Sure, it’s too soon to tell if such a comparison is worthy, but it will be very interesting to see where Josh Radnor goes from here.

Posted on Feb 17, 2013 by
David Tatlow
You can call me Tatt. I like all kinds of films, as well as talking to/boring people about them at great length, so brace yourself.
Follow