A Look Back on Community: The Little Show That Could

The darkest timeline unfortunately came into fruition. As reported by multiple outlets on Friday, May 9, 2014, NBC cancelled Community. My initial reaction, as well as the reaction of the other numerous other die-hard fans, was anger and disappointment. Community was the truest definition of a cult show: beloved by few, but not by enough casual viewers to keep it off perpetual life support. In that sense, the collective feelings of fans were not strong enough to make a difference in keeping the show on the air for one more season.

The show spent years grasping onto mediocre ratings and just barely avoiding cancellation, all the while being possessed by a presence and energy that propelled the show forward and made it seem like it was destined to make it through to the very end. The phrase “six seasons and a movie” evolved from a running joke into a legitimate possibility. Season five even ended with a direct joke regarding the uncertain future of the show. Community was equivalent to the kid in school who never looked like he had anything remotely special about him, until you ran into him and realized he was one of the coolest and most unique people you had ever met–even if you couldn’t exactly explain the appeal to others. All that mattered was that they meant something to you.

Earlier this year, on a Thursday night, I sat in the kitchen having dinner with my father. Both of us robotically shoved spoonfuls of chicken breast and salad into our mouths as we stared at the small television that we had set up on top of the counter. 8 p.m. then rolled by and an episode of Community began to play, with the main characters all sitting around their study table and throwing verbal barbs back and forth at each other. I chuckled at every joke and casual pop culture reference that made its way onto the screen, occasionally glancing back to see if my father shared any sort of interest. Instead, he looked at me and asked, “What is this show?” I told him it was one of the funniest shows on television, filled with vibrant characters and hilarious situations. However, as I found myself trying to explain the complexities of the show and its overall appeal, I froze; there wasn’t any way for me to really convey my love for this program.

The night went on and I finished the episode on my own, as I always did for every previous episode of the show. Thursday nights became a ritual whenever Community aired. I would take in every moment that unfolded with pure bliss, exhilarated at watching a show that was unafraid to do something different every now and then—such as an episode with nothing but puppets or an entire episode with G.I. Joe characters—without ever being worried about what outsiders thought about it. Community truly wasn’t like any other sitcom on T.V.

Community’s strength came from breaking down typical sitcom tropes with its ability to showcase real human emotion through the prism of its characters and its community college setting. Most sitcoms on television are perfectly contempt with simply providing a few hearty laughs and formulaic emotional response to the problem at hand by the end of each episode. A character will have an issue to deal with, for example, and by the end they will have figured the problem out with no lasting consequence or significant emotional response to it in the future. However, in between the rapturous laughs and pop culture references, Community wasn’t afraid to tackle deeper themes related to the negative aspects of life, such as insecurity and failure, and see just how it impacted its characters in the long term.

Everyone on the show represented both the positives and negatives present within all of us. It showed that while people grow and adapt emotionally, there will always be those few friends that appreciate and embrace your perfections and imperfections. Greendale Community College served a prison for those who felt as if they had failed in some portion of their life, while simultaneously being a rehabilitation center for those people to discover what it really meant to be happy. Episodes such as season two’s “Mixology Certification,” “Critical Film Studies” and “Abed’s Uncontrollable Christmas” were perfect examples of these characters sticking with each other despite the disappointment each of them possessed within their own hearts. Community always found a way to analyze these characters’ emotions through a variety of creative ways.

The show’s use of ambitious concept episodes further exemplified its ability to stand out from it sitcom competitors. When asked for a favorite episode of Community, most people would refer to the incredibly well done “Modern Warfare,” the action movie homage that revolved around a paintball competition on the grounds of Greendale. It was a standout 20 minutes that was incredibly fun and arguably the pinnacle of the show’s foray into concept episodes. These episodes would stray away from the traditional structure of sitcoms and instead solve whatever problem the characters were going through by different means. Whether its focus was action-driven or character-driven, other concept episodes throughout Community’s run would range from takes on zombies (“Epidemiology”), Law and Order (“Basic Lupine Urology”), and Dungeons and Dragons (“Advanced Dungeons & Dragons”). They all served to make the show that much more unique then its peers and to further analyze its characters, while also being ecstatically funny. The concept episodes were another ingenious part of a show that lasted much longer than anyone expected.

In reality, most shows do not have the luxury of lasting as long as Community did. Television executives get worried at the first sign of bad ratings and often dump a program before it even has time to get into a creative stride. Community lasted for 97 episodes mainly because of a rabidly passionate fan base that did things like flash mob NBC to keep it on the air, along with the fact that NBC didn’t ever find a suitable replacement to take the timeslot. It also never helped that the show had to compete during the same time with the highest rated comedy on television: The Big Bang Theory. However, time and time again, the show proved naysayers wrong with its yearly return, churning out hilarious and inventive episodes week after week.

Though, it’s hard to deny—even for the show’s most hardcore fans—that Community started to run out of creative steam throughout its fifth season. The return of creator and showrunner Dan Harmon momentarily reinvigorated the program and provided a renewed sense of confidence that was missing throughout season four[1]. Still, after a couple of early standout episodes, such as “Cooperative Polygraphy” and “Geothermal Escapism”[2], the season started to feel flat. Community never reached the heights of its first three seasons; instead, it crawled to the finish line with a storyline that presented no clear indication of where else the show could go from there. Greendale was saved from takeover and the emotional journeys of the characters since season one were essentially over. Maybe it was time for the show to finally say goodbye. 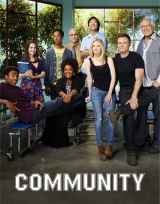 Despite its cancellation, there is hope for fans that the show will be picked up by another service for a sixth season (and then possibly a movie production afterward). However, for those who remember Troy’s realization while eating a giant cookie during the season one finale, too much of a good thing can be bad. If something has a terrible ending, it tends to mask some of the good that came before it (e.g. the How I Met Your Mother series finale). Therefore, sometimes it’s better to just let things go before they get ruined. Regardless whether or not another season and/or a movie happen, the Community of the last five years was unlike any other sitcom on television. It presented a unique environment that held paintball wars, Halloween parties, movie homages, meta-commentary, and a school dance for just about any random celebration; this all occurred while being populated with a merry bunch of characters that could feel incredibly real.

As time goes on, hopefully the show’s popularity will grow and more people will experience the same enjoyment that I, along with numerous other fans, have experienced over the past five years. Community’s relationship with its audience was like Troy and Abed’s secret handshake, a special relationship that was blissfully uncaring for what others on the outside thought about it, but more than willing to let them in if they were ready to embrace what came next. Ultimately, Community will be remembered as the little show that continually survived. It was a show that was able to trigger a multitude of emotions in a matter of minutes and perfectly reflect the emotional struggles that plenty of people experience themselves. As an audience, we were lucky to watch and appreciate this show. It shouldn’t be a surprise that Community got cancelled. It was probably bound to happen. The surprise we should all agree on is just how great and enjoyable this show actually ended up being.

[1] Dan Harmon’s firing from the show after the first three seasons and his subsequent rehiring is well documented, adding another interesting wrinkle to this already interesting program.

[2] These are otherwise known as the finale episodes for actors Chevy Chase and Donald Glover, respectively.

Posted on May 13, 2014 by
Giovanni Insignares
Journalism student at the University of Maryland (2016). Pop culture enthusiast. T.V. shows, movies and sports are a lifelong love. Follow me on twitter @Gio_Insignares
Edited by CriticalOtaku, Jordan, Misagh.
Follow

From “Psycho” to “Bates Motel”: The Evolution of an Iconic Murderer
The figure of the Devil in TV shows
What’s the hook of Korean romance dramas?
Scandal: The White Hat symbolism
Buffy as a role model for us all
TVDU and it’s abundance of LGBTQ ships
The Best Standalone Episodes