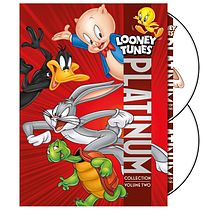 In 1929 Warner Brothers studio set out to create cartoons to compete with Disney and the other studios in the film industry. The result was the Looney Tunes and Merrie Melodies cartoons. Many animation aficionados will generally prefer one studio over the others and Warner’s cartoons are among the most beloved of all.

Usually the second volume of just about any of these kinds of releases shows the level of commitment a studio has when producing this type of product (i.e. very little) and Looney Tunes Platinum Collection: Volume Two is no exception. The first volume came packaged in either a standard edition or a deluxe set. The deluxe edition had piles of extras and premiums in a fancy box, while the standard was a nice ‘digibook’ release. This second volume has none of the bells and whistles and was released in a standard movie case. The lack of care and concern for quality ends there however and Warner Brothers has done as wonderful a job with this release as they did with Volume One.

The main portion of discs one and two are 50 cartoons from the entire history of the Warner Brothers animation era. Like the first set, there are themes to the collection and they are well presented. The complete A.Flea, Cecil Turtle and Beaky Buzzard are for the serious fans but will still be a treat to those unfamiliar with them. The real delight here though, is the complete ‘Hunting trilogy’. For the first time all three shorts are together on a single disc, in the order and original form they were released. As with all of the cartoons on the first two discs of this three-disc set, the three cartoons are re-mastered for Blu-ray presentation and look stunning. While the restoration is not flawless, this is as good as these shorts have ever looked. There is still some specks and dust on the image but it is so minor that most people will not be bothered by it at all. Banding and aliasing are not an issue and these cartoons almost look brand new. The selection of cartoons is fantastic and all the fan-favorite characters are represented. 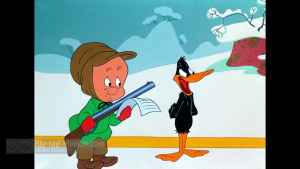 Disc three is filled with another 30 or so bonus shorts. Unfortunately, the audio and video quality varies greatly as these have not had as thorough a restoration as the main selections. The disc has several focused selections on Tex Avery, including a large selection of the shorts he did for MGM, and certain characters forgotten by all but the most die-hard fans. Included is a selection of Mr. Hook cartoons and over half a dozen Private Snafu cartoons done by the studio for the War Department during the Second World War.

These cartoons are amazing and anyone that remembers them fondly will be surprised at the quality of all the shorts in this set. The variety of cartoons presented are quite something to see. In addition to the regular Bugs and Daffy cartoons, fans will see the very first short starring an all but forgotten character named Bosko. Even a lesser known supporting character is given the spotlight with the complete Nasty Canasta shorts. 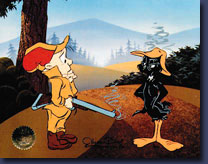 These cartoons were intended to be viewed as theatrical shorts, usually before the main feature or in-between films on a multi-bill. They were never intended for the younger audience that came to love them from the Saturday morning cartoon syndication. They are not always politically correct and are sometimes bordering on offensive, but as the disclaimer at the beginning clearly states they are a product of their time. Failing to recognize that or editing out the ‘offensive’ bits would be the same as claiming these issues never existed. There are indeed some cringe-inducing moments, but for the most part the cartoons are wonderful. If you cannot view them in context and enjoy them for what they are, then this set is not for you. If you are not thin-skinned however, you can see and enjoy them for what they are: art.

Between Volumes One and Two there are nearly 150 cartoons for fans to enjoy. There have been earlier laser disc and DVD box sets but they only managed to cover a third of the complete catalog of the 1000+ shorts done between 1929 and 1960. While many of the shorts are just curiosities and some may be offensive, they all deserve preservation and presentation to a wider audience. I hope Warner Brothers continues releasing these, even if it is only one per year.

Is the World Ready for an LGBTQ Disney Princess (or Prince)?
The History and Impact of Modern Cartoons
The “Actual” meaning of Encanto
The Appeal of the female characters in Arcane: League of Legends
The nature of Self in Centaurworld
Steven Universe and Fascism
Disney’s Live Action Remakes: Who are they for?