5 Most Disappointing Anime of 2014

How should we rate the year 2014 in terms of anime? We did have some remarkably funny series such as Hoozuki no Reitetsu and Gekkan Shoujo Nozaki-kun, the latter being more notable for the Sakura/Paras meme among ACG fans. There were impressive anime movies such as The Idolmaster Movie: Beyond the Brilliant Future!, with that epic live scene at the end. There were sport anime like Ping Pong and Haikyuu!! that earned widely critical acclaim. There were also shows that divided viewers for various reasons, such as Wake Up, Girls!, World Conquest Zvezda Plot, and Yuuki Yuuna wa Yuusha de Aru. At the same time, acclaimed ones like SHIROBAKO, Kiseijuu, and Shigatsu wa Kimi no Uso are still on the air till the end of Winter 2015.

However, there were also shows that made us shake our heads in despair and wonder what the production teams were even thinking in the first place. It might be problem with the visuals, the music, the characters, or the plot itself. In an age where fan service appears triumphant over anything else, shows like Daimidaler the Sound Robot and Recently, My Sister Is Unusual, among many others, also seem to indicate the anime industry is again favoring plots over plot, a trend that one might think would have changed after the year of 2011 where we had widely popular yet structurally brilliant shows such as Puella Magi Madoka Magica, Steins;Gate, AnoHana, and Mawaru Penguindrum. (Granted, we also got Infinite Stratos that year…)

Now, after watching SHIROBAKO, I fully sympathize with the members in the anime industry as I know there are many factors that could ruin the production of an anime, yet that could not take away my feeling of disappointment at some of the series. The five chosen titles listed below are not necessarily bad in the sense of being as bad as Mahou Sensou, which has become a synonym for bad anime nowadays; rather, they are series that were expected to do well, but failed to reconcile that expectation at the end.

Main reason: Failing to induce any tears, as it was supposed to. 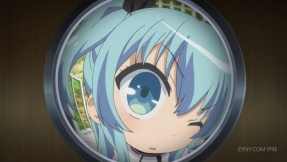 Dubbed as the new AnoHana, Sora no Mesoddo has a good start and instills some mysterious elements that look good in the beginning. However, it gradually loses its appeal when the characters seem to take things for granted far too easily, when they ought to be surprised or at least confused by how things unfold. For example, no one ever bothers to ask why Noel doesn’t seem to have aged when Nonoka had met her as a child years ago. While the last three episodes create a new kind of suspense, it never explains why Shiori still remembers Noel, or why the saucer really matters throughout the series. If not for the comparison with AnoHana before it went on air, it is still just an “okay” show, with nothing that particularly stands out.

Main reason: Failing to grasp on the hype of the first season.

When Selector Infected WIXOSS (the first season of the Wixoss series) ended in June, I was impressed that Mari Okada (scriptwriter of True Tears, AnoHana, Nagi no Asukara) managed to write a script based on a card game and spend very limited amount of time discussing the card battles themselves, but somehow she was able to pull off a strong story by focusing on the characters. Spread, assumingly, is the attempt to elaborate on the worldview of the WIXOSS world and explain the questions generated in Infected. Only that it doesn’t.

The major questions left behind by Infected remain unchallenged, and the second season only fuels more questions instead. Why was Akira attacked in Infected? Why did she still have memory of WIXOSS battle having lost three times already? How was the world of WIXOSS created? Why did Iona/Yuki change from being the villain to a heroine so quickly? The second season raises more questions that it attempts to answer, and along with the rather disappointingly premature worldview that was revealed by the end of this season, it seems like Mari Okada is better suit for writing teenage romance and not drama that requires a strong and detailed plot.

That said, if I were to vote for seiyuu of the year 2014 I would definitely cast my vote on Chinatsu Akasaki, Akira/Aki-Lucky’s seiyuu. Her performance was absolutely stunning by alternating her voice between a lovey-dovey teenager and an absolutely menacing psychopath.

Main reason: Just what the heck is happening?

The reason to watch Glasslip in the first place is mostly because it is an anime produced by P.A. Works, the production company that gives us acclaimed shows like True Tears, Angel Beats!, and Tari Tari. Like every P.A. Works production, Glasslip has amazing visuals and strong background music, but what it lacks is a coherent content that people could actually understand. After watching each episode, I simply asked myself, “So what was really going on?” There is never any clear indication of what those “future fragments” indicate or why P.A. Works is so obsessed with having chickens or an expressionless male protagonist in its productions. There are reviews that suggest P.A. Works is trying to do something experimental with Glasslip, but the Blu-ray sales figure, P.A. Works’ record low of having only sold 584 copies in the first week of sales (for comparison purpose, Nagi no Asukara sold 3717 and Angel Beats! sold 34108), shows that many of us simply don’t understand why Glasslip exists in the first place.

Main reason: trying to make an one-hour movie out of the Lord of the Rings trilogy

For anyone familiar with Niconico, basically the Japanese-equivalent of YouTube but mostly used by ACG lovers, Kagerou Project should not sound strange to the ear. Jin, the creator, uploaded MVs that he created to tell a story of nine teenagers’ struggle against the red-eye phenomenon. Extremely popular with viewers, with some videos receiving over million hits just days or even hours after being uploaded, the project was adapted into an anime in Spring 2014 and was named Mekakucity Actors. It would not be exaggerating to say that it was the most anticipated anime at the time.

The problem with Mekakucity Actors is that the project’s worldview is simply too big to tell within 13 mere episodes. Kagerou Project officially has 22 songs, and each song tells the story of either a character’s background or the development of the plot. Mekakucity Actors’ approach is basically to use one song for one episode, and by simple math one would realize that means many details would thus be left out. While this applies to many anime adaptation as well, Mekakucity Actors fails in producing a coherent plot that makes sense to viewers who know nothing about the original story. Some episodes, like the first three, could have been merged into two, and episodes 6 and 7 could have been merged as well in order to give more space for overall plot development. The last episode also portrays a counterexample to the classic“show, don’t tell” rule in writing: since the show basically runs out of time to develop, it explains everything in the last twenty four minutes instead of attempting to resolve the questions gradually over the last few episodes. Even if one considers this to be a fan-oriented anime, it still speaks volume if one could understand more about a 24-minute episode by just watching a 4-minute Niconico music video.

The first season of Psycho-Pass tells us that the Sibyl System is flawed, much like any system/regime in any dystopian literature. So with Kogami on the run and Shogo Makishima dead, what could the second season give us? We have Kirito Kamui who, like Makishima from the first season, is someone that the Sibyl System cannot detect. But unlike Makishima who is an exceptional case by birth, Kamui’s reason for having a clean psychopass is…bizarre, to say the least. Why in the world does one need an operation that requires the whole flight’s 184 passengers? It sounds too convenient of a development for the scriptwriter to have done so, a recurring trend throughout the season where things happen out of the blue for no particular reason. Also, unlike Makishima who engages in some real physical and psychological battles with Kogami, Kamui doesn’t have a strong enough rival to show his character better as Akane is too busy controlling her own team, and he does not have the wit or charisma of Makishima to keep people focused on the screen.

Since the Sibyl System is the core of the series, it simply cannot fail. We see how Akane and others try desperately hard to defend it despite knowing well that it is not a perfect system as it claims to be. Yet again, it is something we already know from the first season, so what is new, really? Throughout season two, there are a lot of times that the Sibyl System, for the sake of protecting its own reputation, steps aside and watches Kamui’s team kills its hostages. An example can be seen in the last episode, when “the system” tries to strip Akane of its duty yet it could have done the same thing to Mizue Shisui, the inspector who becomes Kamui’s partner in crime, so as to avoid having several dominators being identified with Mizue as the user, which does not make sense in the first place. The system presents the same kind of philosophical questions that we have already encountered briefly in season one, and also ones that do not get resolved in season two still.

Perhaps another disappointing aspect, generated by the production team, is that the movie trailer was released in the middle of the season. Hence, we basically already know who will die and who will survive in season two. That does not mean this season was thoroughly horrible; Akane’s personality growth is done pretty nicely, and the new inspector Mika Shimotsuki looks to be an interesting character despite acting and thinking like an ideal citizen of the Sibyl System. However, throughout the season one could not help but ask, “Where is Kogami?” And we know that the answer will be in the movie, which seems to indicate that this season is created as the bridge to the movie instead of something that can stand on its own.

Terror in Resonance: it has a very strong start but then it fails to have an actually intelligent antagonist whose action makes sense;

Nisekoi: while it has a decent story (following the manga quite attentively), at the same time it proves that Shinbou Akiyaki’s trademark 45-degree could be obsessively annoying in a non-drama, non-Monogatari context;

M3: the Dark Metal: much like Glasslip, the plot is confusing throughout the whole series and shows that, like WIXOSS, Mari Okada is better suit for writing teenage romance than drama;

Girlfriend (Beta): this is the proof that having a fabulous cast of seiyuu doesn’t mean anything without an actual storyline. Although, to be fair, the producers probably aren’t thinking that they need an anime to raise the popularity of the original smartphone game.

Posted on Feb 7, 2015 by
Justin
Contributing writer for The Artifice.
Edited by Mary Awad.
Follow